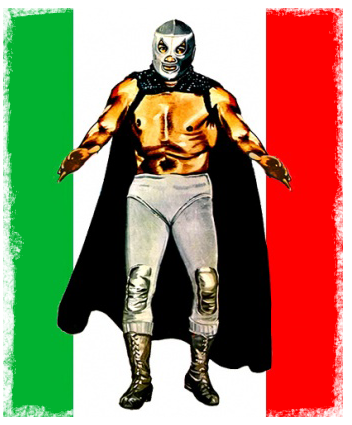 Wrestling had been a popular spectator sport in Mexico since the early 1930s before appearing on cinema screens in the ‘50s. Masked combatants were divided into 2 camps: ‘tecnicos’ (the good guys) & ‘rudos’ (the bad guys) and their dramatic conflicts owed as much to pantomime theatricality as they did to athletic prowess and sportsmanship (although I wouldn’t say that to their faces). The colourful masks provided larger than life identities for the heroes (yay!) and villains (boo!) and a particularly terrible defeat would climax with the loser unmasked and humiliated. On a purely functional level by keeping their faces covered performers could be defeated in one incarnation only to return to the ring as a new character the next week without too much fuss.

The Lucha Libre film genre effectively commenced in 1952 with the release of El Enmascarado De Plata (The Man In The Silver Mask), the lead character based on a popular masked wrestler named El Santo (The Saint). Although El Santo himself would soon embark on a 4 decade spanning film career on this occasion another wrestler played the eponymous role.

The early Lucha Libre films usually pit their masked heroes against gangsters, crooks or kidnappers but slowly science-fiction and fantasy elements crept in to the stories giving the protagonists more other-worldly opponents to grapple with.

The emergence of an indigenous horror genre in Mexico in the late 1950’s, starting with films such as ‘The Vampire’ (1957) & ‘The Man & The Monster’ (1958), had a strong influence on the Mexican wrestling movie. Soon Dracula, the Wolfman, Frankenstein, Zombies and even a few Martians were all invading the wrestling ring. As threatening as these noticeably foreign intruders may have appeared none were able to defy the headlocks and body-slams of Mexico’s tight-wearing national heroes.

El Santo - King Of The Ring

Rodolfo Guzman Huerta was born in 1917 and began his wrestling career aged 16. Between 1935 & 1942 he adopted a number of ‘rudo’ guises including Hombre Rojo (Red Man) and Demonio Negro (Black Demon). In 1942 he adopted the now familiar silver mask of El Santo however despite his new ‘saintly’ moniker Huerta continued to essay the role of ‘rudo’ in the ring. It was the success of his own comic book series and early film appearances, wherein he fought for truth, justice and the Mexican way, that El Santo deserted the dark side and became the wholesome hero we know and love today.

Having turned down the opportunity to appear in 1952’s El Enmascarado De Plata El Santo made his screen debut with supporting roles in 2 crime capers shot in Cuba in 1958: Santo Contra El Cerebro Del Mal(aka Santo Vs The Evil Brain) & Santo Contra Hombres Infernales (aka Santo Vs The Infernal Men).

The first of El Santo’s films to include scenes of the hero involved in actual wrestling matches was ‘Santo Contra Los Zombies’ (aka Santo Vs The Zombies) and the format of the films would soon settle into a popular pattern: El Santo gets called away from his wrestling career to help the police/a professor friend/a shapely young chica to solve a mystery/recover a stolen invention or valuable artefact/rescue a kidnapped relative from a nefarious fiend periodically returning to the ring to fulfil any professional engagements.

Only 4 of El Santo’s 50-something film appearances were dubbed into English for distribution abroad but one of the most popular proved to be 1962’s Santo Vs. Las Mujeres Vampiro (aka Santo Vs The Vampire Women) however in the English language dialogue prepared by K.Gordon Murray El Santo was re-branded Samson. More than anyone else Murray was responsible for exposing non-Spanish speaking audiences to the weird and wonderful world of Mexploitation in the 1960s with his re-packaged versions of Vampire's Coffin & ‘The Curse Of Nostradamus’ among other delights.

By this time El Santo was a household name in his country of origin and, low budgets and recycled plots not with standing, his film adventures would continue into the 1980s. 1966 significantly saw the first El Santo film shot in color; the James Bond-esque Santo In Operation 67, and 1974 saw the man in the silver mask face off against Mexican folklore’s popular horror movie monster La Llorona in Santo In The Vengeance Of The Crying Woman (aka ‘Santo En La Venganza De La Llorona’).

On some occasions when a task was too treacherous for one wrestling superhero a tag-team partner or two would be called upon to lend a fist. Throughout the 1970s El Santo would regularly team-up with partner-in-crime-fighting Blue Demon for such momentous adventures as Santo And Blue Demon In The World Of The Dead and Santo And Blue Demon Vs Dracula And The Wolf Man.

El Santo’s last film appearance was in 1982’s ‘Santo En La Furia De Los Karatecas’ (aka Santo In The Fury Of The Karate Experts) alongside the youngest of his 10 children Jorge who rather inevitably adopted the name El Hijo Del Santo (The Son Of Santo). Rodolfo Guzman Huerta died in 1984 of a heart attack and was buried wearing the iconic silver mask of his legendary alter ego.

Joining El Santo and Blue Demon in their efforts to solve 1977’s ‘Misterio En Las Bermudas’ (aka Santo In The Bermuda Mystery) and unravel 1970’s ‘Momias De Guanajuato’ (aka Santo In The Mummies Of Guanajuato) was Mil Mascaras so named because he was the owner of a thousand different masks. Mil Mascaras & Blue Demon also formed part of a wrestling super-hero team dedicated to ridding the world of rudos called Las Campeones Justicieros (‘The Champions Of Justice’).

Not to be outdone by the dudes when it came to pulling on the tights Las Luchadoras were a troop of wrestling ladies who appeared in 6 films between 1962 and 1968 dispensing their own brand of feminine justice to various villains. Highlights of the series include ‘Las Luchadoras Vs El Medico Asesino’ and ‘Las Luchadoras Contra La Momia’ both of which were given English language makeovers by K.Gordon Murray becoming ‘Doctor Of Doom’ and Wrestling Women Vs The Aztec Mummy respectively.