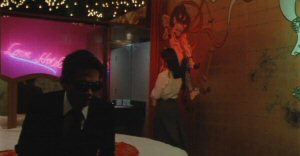 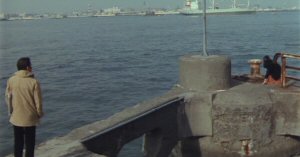 Love Hotel was directed by master filmmaker Shinji Somai. It’s not rare that talented directors begin their career in the pink genre before breaking through to mainstream cinema. Somai, however, had already established his position as one of the most acclaimed Japanese directors of the 80’s. In 1985 he surprised the audiences with his one film Nikkatsu collaboration. To make matters more puzzling, Love Hotel was released only four weeks prior to Taifu Club, Somai’s crowning achievement and a landmark in Japanese cinema.

Love Hotel begins with the downfall of Tetsuro Muraki (Minori Terada). His company goes bankrupt and he fails to pay back the money he owes to the yakuza. Not being able to get money out of him the loansharks rape his wife in front of him. The desparate Muraki plans to end his life in a Love Hotel after sex with a prostitute but finds himself too weak. The film continues two years later. Murakami has divorced from his wife in order to protect her from the debt, and become a taxi driver. One day he meets Nami (Noriko Hayami), a woman he believes might understand him due to being in a similar situation.

Still, there is a reason why Nikkatsu acquired the film. Compared to the director’s earlier work Love Hotel is definitely a griettier and more sexually explicit film. That, however, does not equal to decreased quality. Fans of Somai will recognize his touch easily. The long takes, stylish use of music (with Momoe Yamaguchi’s Yoru he playing during the pier scene) and deep focus on characters are all here. The cast is pretty good with very decent performances from both leads. The brilliant cinematography is courtesy of Noboru Shinoda, a frequent future collaborator of Shunji Iwai.