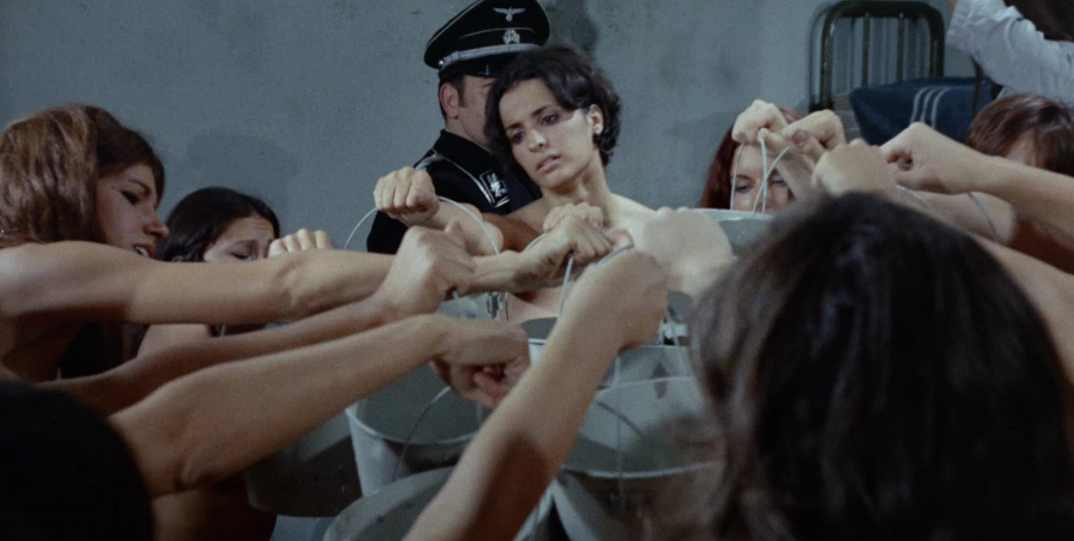 The Allies are planning a daring undercover mission into occupied Germany in order to obtain information about secret Nazi warplane programmes previously fed to them by a key Nazi scientist. Because of her Jewish origins, that scientist however has ended up in Love Camp 7, one of many prison camps that double as whore houses for the Third Reich’s officers. The allies drop two female undercover soldiers deep into enemy territory. Their mission is to get caught, get imprisoned at the notorious camp, and extract any information from the chief scientist, and then escape back to safety. Easier said than done. The camp commandant is a ruthless sadist, and even though one of the guards is feeling sympathetic to the prisoners, it turns out to be a torturous experience, especially after the scientist’s health deteriorates, and while the allies are planning an extraction, a new army general arrives in the camp…… 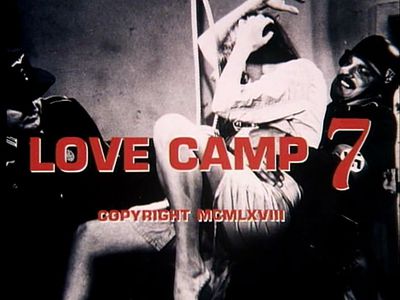 If you can appreciate the ideas and if you can laugh at the trash factor, this movie is for you. If you feel offended, you should steer clear of it. This is a Nazisploitation death camp torture flick - kind of - so you have been warned. Love Camp 7 features super trashy dialogue, a standard story borrowed from classic men on a mission flicks, but this ain't no Where Eagles Dare. Directed by Lee Frost (Chain Gang Women) and written by Bob Cresse (Mondo Bizarro) who also plays the camp commandant, the movie dives deep into the “it is a true story and the voiceover proves that we are serious” territory, but once shit hits the fan, the house of cards comes crumbling apart. There are bad action sequences and no actual sets, some of the guns are not authentic, a lot of the clothes, haircuts and so forth are also not visibly from the 40s, so all in all, the corny nature is still well visible. You’ve got your atrocious acting, cheap chuckling, clumsy editing and yes, some nudity, so the first parts of the movie is mostly women undressing or getting yelled at. However, sex seems to be confined to making grimaces, and rolling around with pants still on. Nothing to write home about.

The voiceover gives it a sense of authenticity and narrative of an actual mission, and there is John Alderman (Saddle Tramp Women) as Captain Calais of the resistance, also a familiar face in some exploitation circles. Some other nobodies line the sides in what is mostly a three-room movie. It however looks high quality in terms of camera and lighting, but this is no Salon Kitty, and it is no Ilsa either. It's sadistic, it's corny, it's wrong, it's 95 atrocious minutes, but at the same time - and thanks to the soothingly awesome picture clarity of the BluRay - still an entertaining little trash fest. You gotta laugh, I'm telling ya. 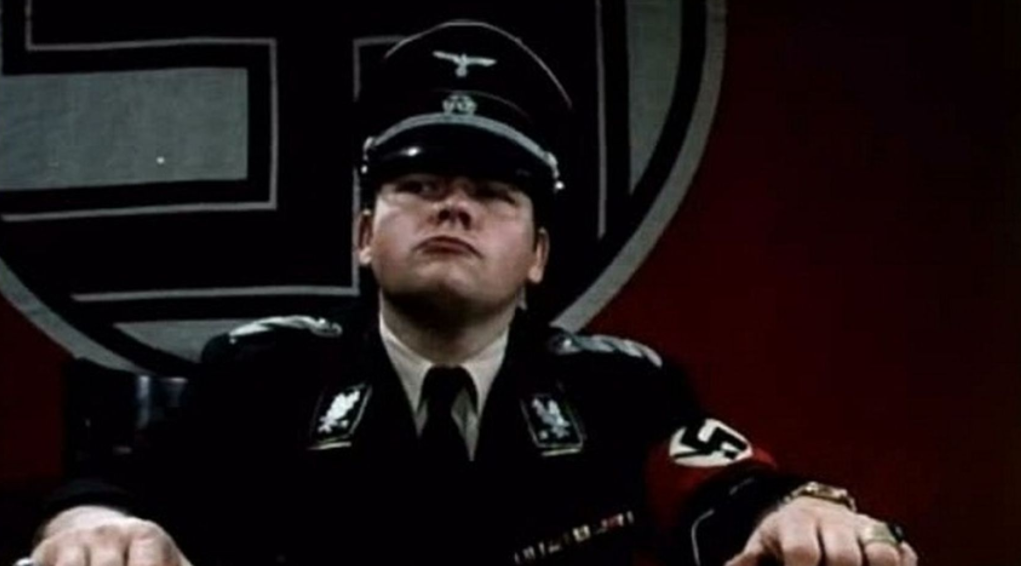 The movie is one of those that launched the Nazisploitation craze of the 70s, and you can dive into some of the disc’s extras to find out what other flicks the genre has in store. This one ranks among the tamest, and on the lower quality end, but it’s still a seminal flick if you’re invested in the genre.

The BluRay's audio quality isn’t that great, but the transfer (brand new 4k restoration from a recently discovered camera negative) looks quite amazing. In fact, it looks almost too good. The contrast between the technical quality of the transfer and the quality motion picture is worlds apart, not sure if they should’ve included a VHS-grade version to chose from. The audio just suffers from crackling and bad quality, but it is quite acceptable. Rare for Blue Underground, and absolutely laudable, are the subtitles in 17 languages. Then there are a few interesting special features. 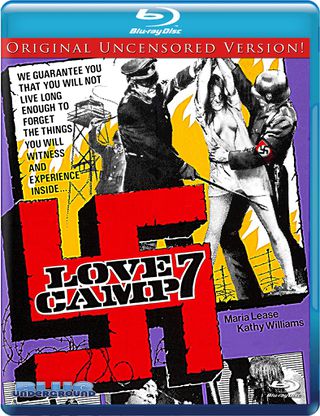 NAZITHON: DECADENCE AND DESTRUCTION (80 Minutes) is a very curious kind of documentary about the sub genre of Nazisploitation (warning, you’ll see plenty of these movies, so if you want to be surprised, skip it), going through previews for Love Camp 7 and a number of others, like SS Camp 5, with a small role even for Pam Grier Special Section Women which is quite out there, and S.S. Hell Camp that enters the crazy experiments category, and Experiment Love Camp, another notorious video nasty with gore you don’t wanna stomach. Then we leave the camp category and see previews for more sleazy sexploitation stuff like Private House of the SS, the artsy and actually famous Tinto Brass film Salon Kitty with Helmut Berger, then The Damned also with Helmut Berger and directed by Luchino Visconti which add sa twist of family drama and social controversy, but probably not considered Exploitation. The third batch of movies introduced is about “Nazi babes”, with the obvious Ilsa: She Wolf of The S.S. at the helm starring Dyanne Thorne, S.S. Hell Camp (again), the entertaining Fräuleins in Uniform, then a sequel Ilsa: Harem Keeper of The Oil Sheiks, taking the war into the Africa Theater and lots of exotic madness, and also Ilsa: The Wicked Warden with Dyanne Thorne, more a women in prison movie than naziploitation. Another one that sounds like a rip off of the Ilse movies is Elsa Fräulein SS, about a rolling whorehouse on rails with a twist. Then it’s Ilsa: Tigress of Siberia, that franchise was unstoppable. Another category within the genre are kind of twist ups like The Black Gestapo (if that title doesn’t get you, I pity you). How about motorcycle gang movies with Nazis? Check. The Tormentors is for you then. Even a post apocalyptic mash up is here, check out Mad Foxes wich smells like a Death Race 2000 or Mad Max movie infused with some Naziploitation. How about Hell's Bloody Devils, quite a nasty twist on the biker movie gang movie. Then it goes into the supernatural world, with Peter Cushing and John Carradine starring in Shock Waves, kind of a nazi zombie movie. Another one is She Demons, which is actually a black and white flick and kind of a Frankensteinian twist, it looks fascinating. With Zombie Lake we are back in Nazi zombie territory, looking like it was shoot in the Bavarian woods somewhere. In Bloodsucking Nazi Zombies kind of an adventure vampire twist and in Night of the Zombies, wich looks super campy. Lastly, some higher budget stuff with Death Ship, starring among others Richard Crenna etc….. and is more about a ghost ship from the past than a nazisploitation movie. I think I saw this on TV sometime. Great stuff. Then there's Zombie Lake which is the same as the the other Zombie Lake, but the previews hows a more hippie nudie movie with Nazi zombies instead of great white sharks or Piranhas.

Other special features include the Theatrical Trailer, a Poster & Still Gallery, the BONUS Collectable Booklet featuring The History of Nazi-Exploitation by Paolo Zelati with a great overview of the genre and some fantastic poster artworks, and lastly the movie in standard definition on DVD (NTSC).