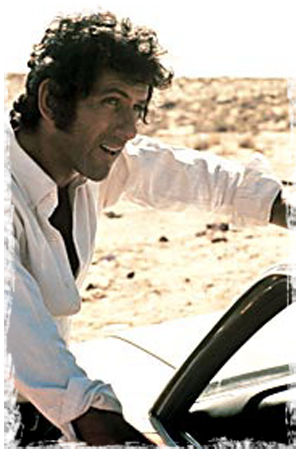 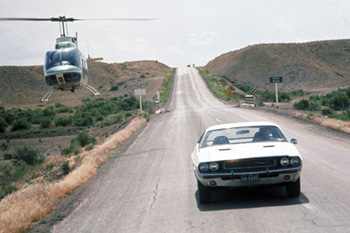 Kowalski is a fictional character portrayed by Barry Newman in the 1971 carsploitation film Vanishing Point. The film was produced by 20th Century Fox. Written by Malcolm Hart, Guillermo Cain, and directed by Richard C. Sarafian. In the film, we don't find out alot about Kowalski's personal life except through flashbacks which provide some pieces to the greater puzzle. Kowalski has been a policeman and a motorcycle racer among other things. In the present timeframe, Kowalski works as a automobile delivery driver. His job is to bring a 1970 Dodge Challenger from Denver to San Francisco. Making a bet with his friend that he can make it to San Francisco in under 3 days, Kowalski becomes a criminal on the run from the law when he takes the car and dismisses any kind of "street law", driving as fast as he can to his destination.

A remake was created for Fox television in 1997. The film starred Viggo Mortensen as Kowalski. The character was rewritten as a suspected militia sympathizer from Idaho. Jason Priestley played "The Voice", a talk radio shock jock who replaces Super Soul. The two films are similar, but the remake removed all of the original's mystical elements. Richard Kelly is currently writing a remake of the film for 20th Century Fox.

Vanishing Point was the basis for Audioslave's 2004 music video "Show Me How to Live", directed by the AV Club and which included members of the band in the 1970 Challenger travelling across the desert, following the plot of the movie.

In the 2007 post-modern psychological action-thriller Death Proof, the character of Stuntman Mike and the overall concept of the film were influenced heavily by the Kowalski character and Vanishing Point. Writer-Director Quentin Tarantino stated that Vanishing Point was the "touchstone" for his movie. The film even features the same model car that Kowalski drives and is mentioned by the characters as well.