Having previously paired up the King of the Swingers and the King of the Monsters in 1962s King Kong Vs. Godzilla Japan’s Toho Studios made a return engagement with Fay Wray’s favourite ape in the gloriously demented ‘King Kong Escapes’, throwing a cape-wearing wannabe Bond villain and a giant robot gorilla into the mix for good measure.

A submarine containing an international crew of United Nations scientists is damaged by an underwater landslide and forced to dock for repairs at nearby Mondo Island where legendary super-ape Kong is rumoured to reside. Three of the eggheads; Captain Nelson, Colonel Namura and Medical Officer Watson, go ashore in a funky hovercraft and encounter a wrinkly old dude in a loin cloth who squawks and waves his arms a lot and warns them that they are trespassing in the hood of Kong. Of course, being scientists they ignore his primitive jibber-jabber and soon enough find themselves attacked by a giant scaly something-or-other-saurus. Watson’s screams wake Kong who happens to be napping in a nearby cave. He picks her up and gives her a sniff before balancing her in the branches of a tree. It’s obviously love at first sight (or rather first sniff). The giant ape then proceeds to whack seven shades of shit out of the whatsamasaurus until it starts foaming at the mouth. Nelson, Namura and Watson make a dash for the sub only to find their path blocked by an extremely rubbery sea serpent. Kong intervenes, braining the snake with a boulder before wrapping it round his neck like a slippery scarf.

Meanwhile a nefarious mad scientist with extremely bad teeth called Dr Who (not to be confused with the UKs televisual time-traveller) has invented a giant mechanical double of Kong which he plans on using to excavate an extremely radioactive mineral called Element X from a crater at the North Pole. Apparently whosoever possesses Element X will achieve ‘nuclear domination of the universe’. Unfortunately domination of the universe is going to have to wait a while as the Doc’s robot Kong proves itself to be less reliable than the Duracell bunny and burns out while digging where X marks the spot. The diabolical Doc decides instead to kidnap the real Kong and get him to do the dirty work. He employs a squad of choppers to drop ether on Mondo Island and once our primate protagonist is unconscious the Doc airlifts him off to the North Pole where he uses a sparkly multi-coloured crystal to hypnotise the beast.

The UN science boffins return to the island to find Kong gone and the wild man of the jungle bleeding to death having been ruthlessly shot by the despicable Doctor. Before breathing his last the old geezer mutters something that sounds like ‘mocca-choco-lata-ya-ya’. Roughly translated this means: “That evil dude Who has kidnapped the big guy!” Of course Dr Who hasn’t paid any attention to the film’s title otherwise he would know that (surprise, surprise) King Kong Escapes! The damn dirty ape swims ashore near Tokyo pursued by the Doc’s re-charged Mechani-Kong for a final showdown of ape on ape action and toy tank stomping mayhem!

‘King Kong Escapes’ has it all; a giant ape, a giant robot ape, a mad scientist with a hypnotic crystal, a hover craft, a silly serpent, a foaming at the mouth dinosaur, submarines, ether, Element X !!! The cinematography is crisp and colourful like a 1960s comic book come to life, the musical score is irrepressibly bombastic, and the model miniatures are exquisitely detailed. Don’t let anyone tell you this is one of those ‘so bad it’s good’ movies ‘cause that’s bullshit. ‘King Kong Escapes’ is wonderful fantasy entertainment. It looks like it sprung straight from a child’s imagination and splashed across the screen with a completely unashamed exuberance. It’s simply Toho-tastic!

In the grand pantheon of Toho’s outrageous monsters Kong is certainly one of the most peculiar looking. The studio rarely utilised mammals as the stars of its creature features, most of them are lizards or insects or monsters from space. One notable exception being the dog-like King Caesar in Godzilla Vs. Mechagodzilla. Kong’s furry suit appears to have caused Toho special effects guru Eiji Tsuburaya some difficulty; it might best be described as moth-eaten while the ape’s face looks like a squashed chocolate muffin with fangs. Despite resembling a hastily stitched together pile of roadkill there’s something rather charming and loveable about Toho’s wonky Kong. Akira Ifukube’s musical score tugs at the heartstrings during scenes of Kong fawning over Linda Miller’s character as he nurses her in the palm of his hand and flutters his garage door eye lids. The fact that the ape is boss-eyed and snaggle-toothed just adds to the pathos. Even if he weren’t a 60 foot tall primate, she’d still be out of his league. 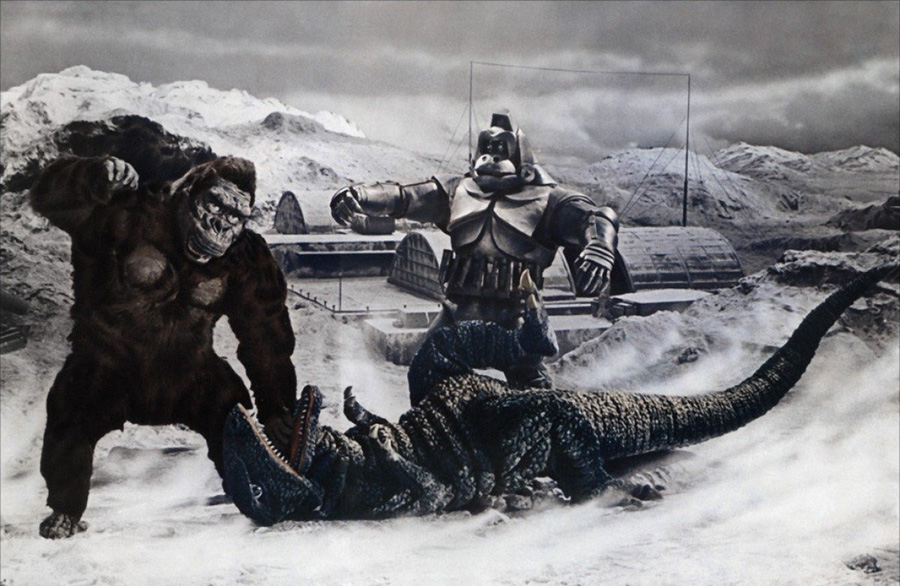 Although malfunctioning on his first assignment didn’t bode well for his world conquering abilities Mechani-Kong makes for an awesome nemesis when he finally gets to go toe-to-toe with our hairy hero. Dr. Who has fitted him out with dazzlingly bright head lamp eyes and has mounted his hypnotic crystal on top of the robots head so that when Kong sees it he’ll think its sleepy time. It’s a shame that Toho weren’t inclined to bring Mechani-Kong back in a sequel as I would have loved to have seen him team up with Godzilla’s own evil android doppelganger, Mechagodzilla, for some city smashing fun and games.

The U.S. edit of the film runs approximately 8 minutes shorter than the original Japanese cut and it’s this shorter version that Universal studios issued on DVD in the U.S and U.K. Most notably Watson’s rescue from the Tokyo tower during the climactic battle is missing from the English dubbed cut but whichever version you see ‘King Kong Escapes’ is a ton of ape lovin’ fun.