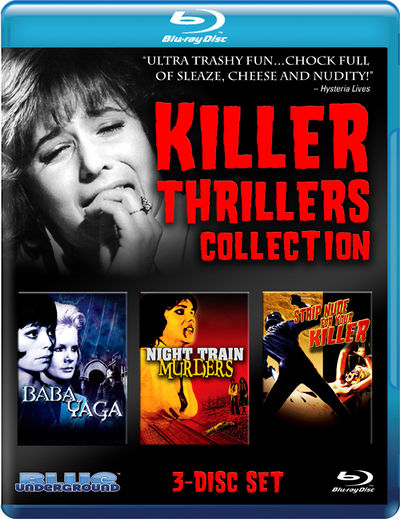 BABA YAGA: Legendary sex symbol Carroll Baker stars as a mysterious sorceress with an undying hunger for sensual ecstasy and unspeakable torture. But when she casts a spell over a beautiful young fashion photographer (the gorgeous Isabelle De Funès), Milan’s most luscious models are sucked into a nightmare world of lesbian seduction and shocking sadism. Are these carnal crimes the result of one woman’s forbidden fantasies or is this the depraved curse of the devil witch known as BABA YAGA?

NIGHT TRAIN MURDERS: It was released as SECOND HOUSE ON THE LEFT, NEW HOUSE ON THE LEFT, and TORTURE TRAIN. The ads screamed, “Most movies last less than two hours! This is one of everlasting torment!” It remains one of the most graphically fiendish films in exploitation history, the story of two teenage girls traveling through Europe, forced into a nightmare of sexual assault and sadistic violence.

STRIP NUDE FOR YOUR KILLER: The stunning Edwige Fenech stars in this infamous shocker that packs more grisly violence and sexual depravity into each frame than most any other film in the entire giallo genre. There’s succulent flesh aplenty as a mysterious killer dressed in black leather and wearing a motorcycle helmet begins butchering beautiful young fashion models with no mercy and one deranged request: STRIP NUDE FOR YOUR KILLER!