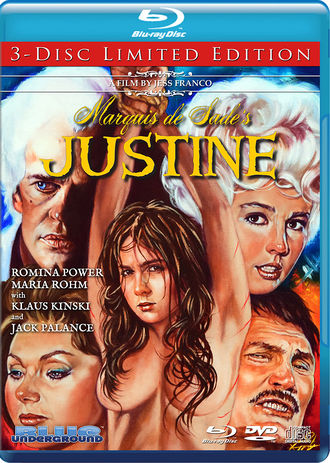 The film tells the story of Justine (Romina Power) and Juliet (Maria Rohm), two orphans who need to leave a catholic orphanage school when their benefactor dies. The two are being let lose on the world, and while Juliet seems to be quickly adapting to the depravities of the times and the compromises they seem to require a young girl make, Justine struggles and keeps being exploited for her good intentions. Juliet ends up in a brothel and learns and ascends, plays the power games right and the intrigues, and eventually becomes rich and powerful. Justine gets mugged, mistreated, convicted as a thief and ends up on the run with not much more than a rag on her body. A convicted murderess (Mercedes McCambridge) helps her escape from a female prison, but she keeps ending up with bad people, and the law (or what makes for the law in those times) is still behind her. Only a painter she met on the run seems to be her savior, but with soldiers on her path, she eventually ends up seeking refuge in an a church. Occupied by a sadistic orden (lead by a priest played by Jack Palance), she suffers torture and abuse, and in a stroke of luck manages to escape... again.... so her struggles are far from over

Jess Franco's Justine is neither his only adaption of one of the lurid works of the Marquis de Sade, nor is this the only one of this particular story. I am not sure what drove them to turn semi-ambitious period pieces into movie fare marketed to perverts, but apparently they were good and walking that fine line. That in fact the movie is neither erotic nor dirty or anything along these lines, matters less. Exploitation cinema has always been more about what was promised than what was delivered. And in that vein, it surprised me little that the well-advertised Klaus Kinski delivers barely a cameo role as the titular Marquis de Sade, locked up in some sort of prison, haunted by sadistic dreams, writing his successful stories.

What makes up for his short appearance (which adds nothing to the movie aside from confusion, and probably box office bucks), are some other interesting cameos that should delight the genre connoisseur. There is Horst Frank in a tiny cameo, Manuel Martin, Rosalba Neri, Sylvia Koscina and in a more extensive scene, Jack Palance. The latter delivers a weird depiction of a priest, in what also surely took little more than half a day to film. Which brings me to Franco's work proper. What needs to be said about the film is, that it definitely looks great (not just because this is a 4k restoration of the original print). The cinematography may not be masterful but it is top notch and so are a lot of the sets and locations, lighting and colors. The cheap aspects of the film are the robot-like performance of its lead actress and the lousy script. I can understand why folks back then might have wanted to cut the movie down to its minimums, but without extending the few bits of naked skin, I am not sure if people might have asked for their money back. 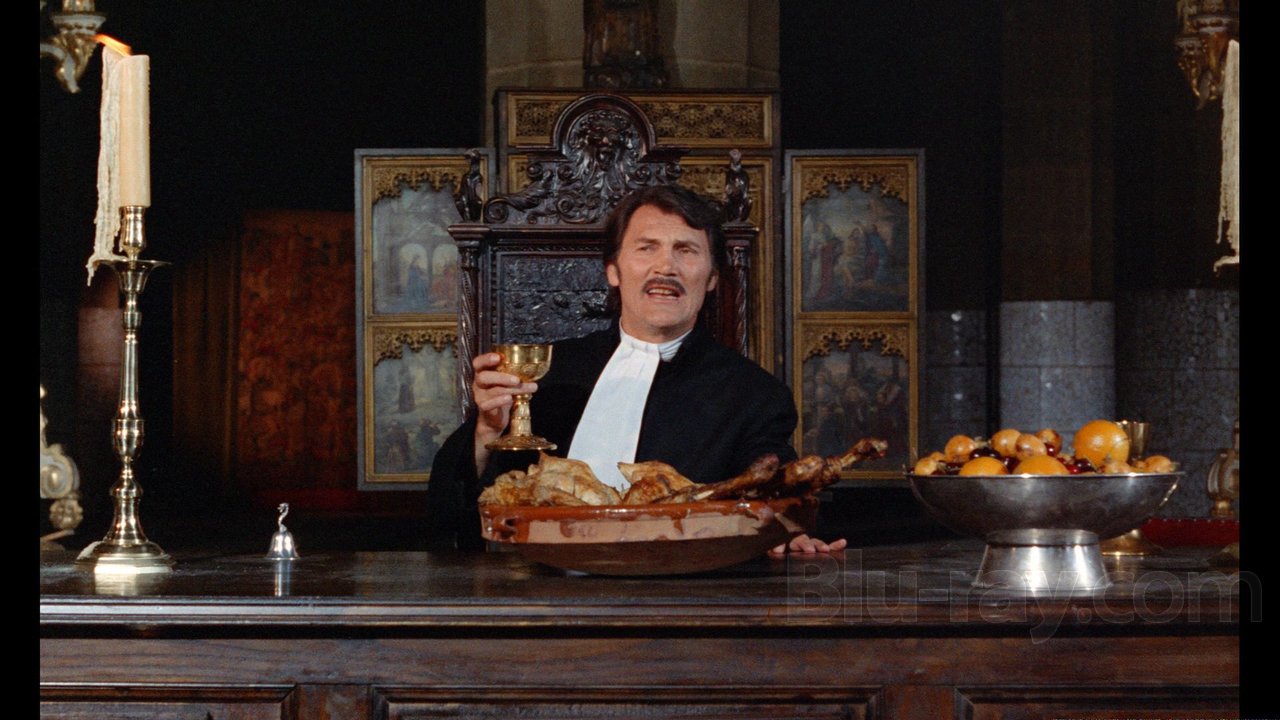 Other works of Jess Franco have seen distributors edit semi-pornographic content in without the director's consent to make the films more interesting. They might have had a point. Justine is really not much of a Sexploitation film. It is a moral tale disguised as a costume drama, with a few scenes of sadistic theme that serve to illustrate the main point of de Sade's story: to what end does an innocent person have to feel punished, why do the rotten eggs in the world have all the success? A good question indeed. In this case I don't have the numbers, but apparently the movie never had a real theatrical release in the US worth talking about, and the heavily cut DEADLY SANCTUARY might have made more bucks than we'd probably guess. So much for the rotten eggs.

The fact that Franco and his fellow filmmakers in the 70s could afford to shoot lavish dramas in gorgeous locations might in retrospect be called luck. This was only a few years away from the emergence of video, and television was already widely available. Just as the Italian film industry started its descent into oblivion, it was able to churn out a couple more movies of all kinds. Together with their French and German compatriots (Spain less so, for its dictatorship lay in its last breaths, too) the Italians managed to pull in a lot of international talent still, and the thirst for genre movies, all kinds of crime sagas as well as wild action and daring sexuality still meant a lot in terms of box office. The hunt for material is an interesting case here. Franco was not the only one who regularly turned to classic or pulp literature for inspiration. One of the most notorious and flat out insane movies that has period piece ambition, big budget and wild success: Caligula. Justine might be a low key flick for the down town escapists of the day, but in a way, it is part of a sub genre of overly ambitious sexploitation flicks, films that want to be more than their audience is longing after. After this one, I will go on and watch his Eugenie. The saga continues. De Sade lives. 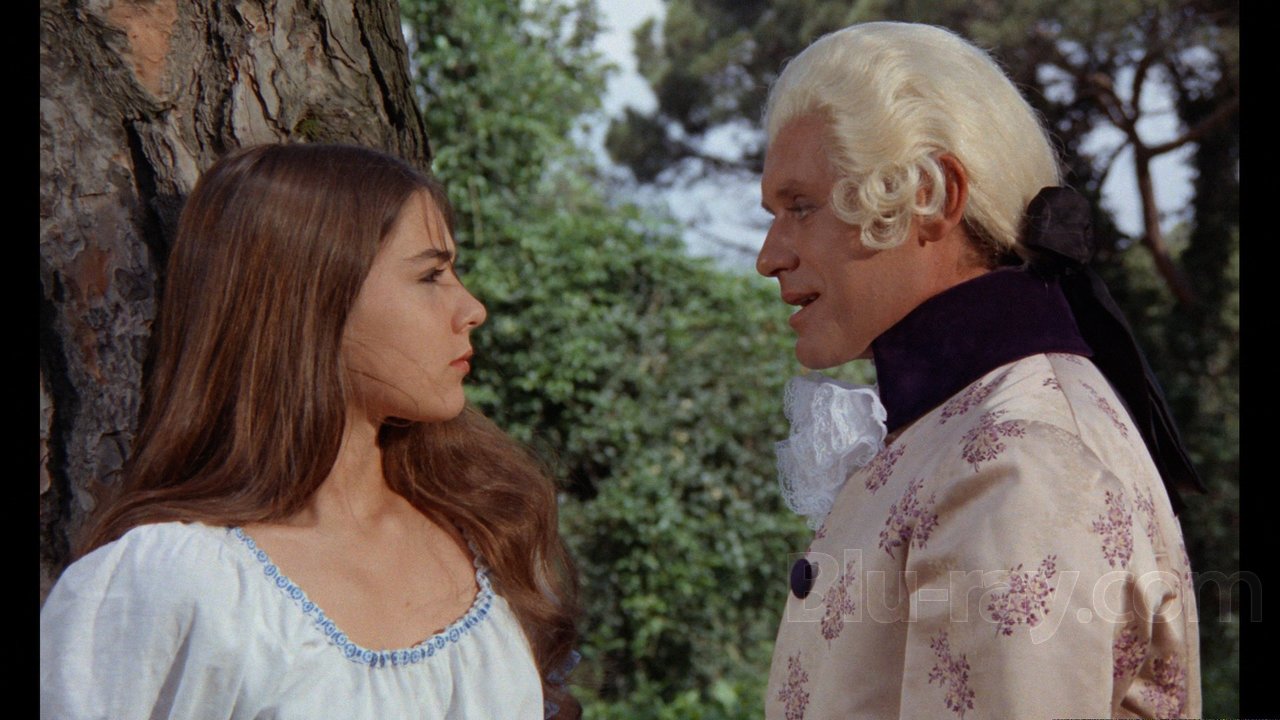 The BluRay that Blue Underground has delivered for Justine is probably a lot more than this movie deserved. They went all out again and present this movie in a way most high quality classics don't even get. It's a gorgeous new 4K transfer from original negatives that they struck here, and it goes the whole two hours of length, presenting what I assume is the fully uncut version. The movie is absolutely tame, it might almost be safe for work. The English track is also amazingly preserved, and while I wished Blue Underground would make their releases more multilingual (it is a US-based company, so it doesn't make too much sense for them economically), there are a few subtitles to help importers to some extent. I checked a Spanish-dubbed version on YouTube because I wanted to check whether the voice-over was an invention of the English dub or actually part of the film (it is, probably those are the words of the Marquis de Sade's narration).

In terms of extras, there is "The perils of Justine - Interviews with co-writer/director Jess Franco and producer Harry Alan Towers", a 20minute interview with the two. Jesus speaking French, so he is subtitled. This s a very interesting insight from the two makers of the film, you don't get much closer to exploring the origins of the film. They share some hilarious anecdotes as well, as I mentioned above, the lead actress really wasn't anyone's first choice, and some of the production was troubled (for example in terms of the Spanish authorities). Then there is "Stephen Thrower on Justine / interview with the author of Murderous Passions: The Delirious Cinema of Jesus Franco", an 18 minute interview with the insider. An adapted version of his texts form the booklet accompanying this release. The interview is a good addition to the booklet, and should wet your appetite for potentially diving into his extensive book. Here at the GCDb we will definitely dive deeper into the works of Jess Franco in the following months. Lastly, there is the French trailer and some poster and still images.

Along with the BluRay version, the set also comes with a good old DVD version of the flick (maybe to lend to your friends who for some weird reason don't have a BluRay player), and - what is really nice - the CD of the original motion picture soundtrack. This brings me to one last aspect I haven't gone into above. Bruno Nicolai scored this film (he also scored Eugenie), and it is a wonderful soundtrack. While it isn't the kind of soundtrack I would listen to separately, I get that some folks might be interested in this. I for one, am past the age of CDs, but it is a great collector's item. On top of it another goodie for collectors: the 20-page booklet, which comes with a text by author Stephen Thrower (the author of this book). It goes into the background of the novel and the makings of the film, especially the contested releases, all in all a very informative read.

Special thanks to Blue Underground for providing a review copy of the release, and thanks to Blu-ray.com for taking some great screenshots, two of which I used above.