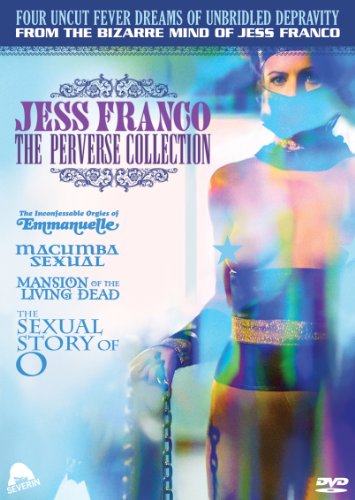 MANSION OF THE LIVING DEAD: Get ready to experience notorious writer/director Jess Franco at him most wild, perverse and extreme! Four wanton waitresses including Eva Leon of HOUSE OF PSYCHOTIC WOMEN, Mamie Kaplan of LILLIAN, THE PERVERTED VIRGIN and the legendary Lina Romay billed here as Candy Coster of BARBED WIRE DOLLS arrive for vacation in the Canary Islands where they soon indulge their hungers for masturbation, lesbian lust, bondage and beyond. But the ultimate depravities are still to come, as a nearby 17th Century monastery unleashes a horde of zombie Templars crazed for the taste of hot female flesh! Robert Foster from MACUMBA SEXUAL co-stars in this jaw-dropping saga of sex and sadism that Franco scholars have called an insane homage to the BLIND DEAD series. Severin Films is proud to present it now fully restored from original Spanish elements, featuring all-new Bonus Materials and presented totally uncut & uncensored for the first time ever in America!