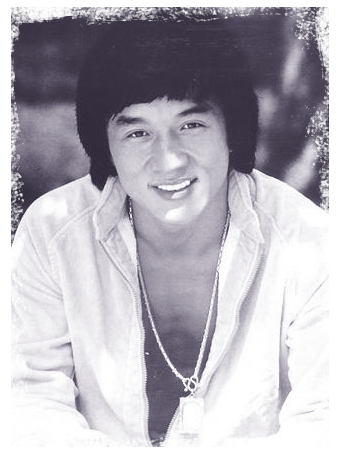 Jackie Chan, SBS, MBE[1] (born Chan Kong-sang, 陳港生; 7 April 1954) is a Hong Kong-born Chinese[2] stuntman, actor, and director whose perilous acrobatic stunts and engaging physical humor made him an action-film star in Asia and helped to bring Kung Fu movies into the mainstream of American cinema. In his movies, he is known for his acrobatic fighting style, comic timing, use of improvised weapons, and innovative stunts. Jackie Chan has been acting since the 1960s and has appeared in over 100 films.

In 1976, Jackie Chan received a telegram from Willie Chan, a film producer in the Hong Kong film industry who had been impressed with Jackie's stuntwork. Willie Chan offered him an acting role in a film directed by Lo Wei. Lo had seen Chan's performance in the John Woo film Countdown to Kung Fu (1976) and planned to model him after Bruce Lee with the film New Fist of Fury.[3] His stage name was changed to Sing Lung (Chinese: 成龍, also transcribed as Cheng Long,[4] literally "become the dragon") to emphasize his similarity to Bruce Lee, whose stage name was Lei Siu-lung (Chinese: 李小龍, meaning "Little Dragon"). The film was unsuccessful because Chan was not accustomed to Lee's martial arts style. Despite the film's failure, Lo Wei continued producing films with similar themes, resulting in little improvement at the box office.[5]

Chan's first major breakthrough was the 1978 film Snake in The Eagle's Shadow, shot while he was loaned to Seasonal Film Corporation under a two-picture deal.[6] Under director Yuen Woo Ping, Chan was allowed complete freedom over his stunt work. The film established the comedic Kung Fu genre, and proved to be a breath of fresh air for the Hong Kong audience.[7] Chan then starred in Drunken Master, which finally propelled him to mainstream success.[8]

Upon Chan's return to Lo Wei's studio, Lo tried to replicate the comedic approach of Drunken Master, producing Half a Loaf of Kung Fu and Spiritual Kung Fu.[9] He also gave Chan the opportunity to co-direct The Fearless Hyena with Kenneth Tsang. When Willie Chan left the company, he advised Jackie to decide for himself whether or not to stay with Lo Wei. During the shooting of Fearless Hyena Part II, Chan broke his contract and joined Golden Harvest, prompting Lo to blackmail Chan with triads, blaming Willie for his star's departure. The dispute was resolved with the help of fellow actor and director Jimmy Wang Yu, allowing Chan to stay with Golden Harvest.[10]