A young gambler/playboy's family is murdered by Manchu thugs and he is the only survivor left. His name is Iron (Chen Kwan Tai). After Iron finds out his family has been murdered, he goes on the lam. One night at a nearby Shaolin temple, the monks see what they think is a "monkey" climbing down into the room to grab some food. When they find out that it is actually Iron looking for shelter, they invite him in and present him to the Shaolin abbott. Iron explains that he wants to become a Shaolin monk, but they will not except him because he still has too much hostility and revenge in his heart. Until he gives up everything including his thirst for vengeance, he cannot join officially. The Shaolin let Iron stay there anyway to train in kung fu in hopes he will lose his taste for vengeance.

Iron is applauded for his good martial arts talent, he explains that while he was outside the temple he would watch the monks training so he practiced on his own and picked up some things. One day, the Shaolin abbott tells the men that each of them must choose a certain kung fu style to specialize in. One of the main styles is the legendary Monkey Fist style. After a monk makes a joke about Iron, saying to everyone that he "moves like a monkey" already, the abbott tells Iron that he will train in Monkey Fist with the Bitter monk who now resides in the East end of the Temple. When Iron arrives, the Bitter monk tells him to go away since he was sent against his wishes. But Iron tells him he wanted to come to learn. The Bitter monk jumps at Iron and begins to start testing his skills as a fighter. This sequence in the film is one of my favorites. Iron trains with the bitter monk and learns the secrets of monkey fist fu. One method of practice is standing on clay pots under incense candles and moving around on top of them without falling. After Iron trains for months or even years, he has a spar battle with the Bitter monk and shows how great he is at the monkey fist style. The Bitter monk is impressed. 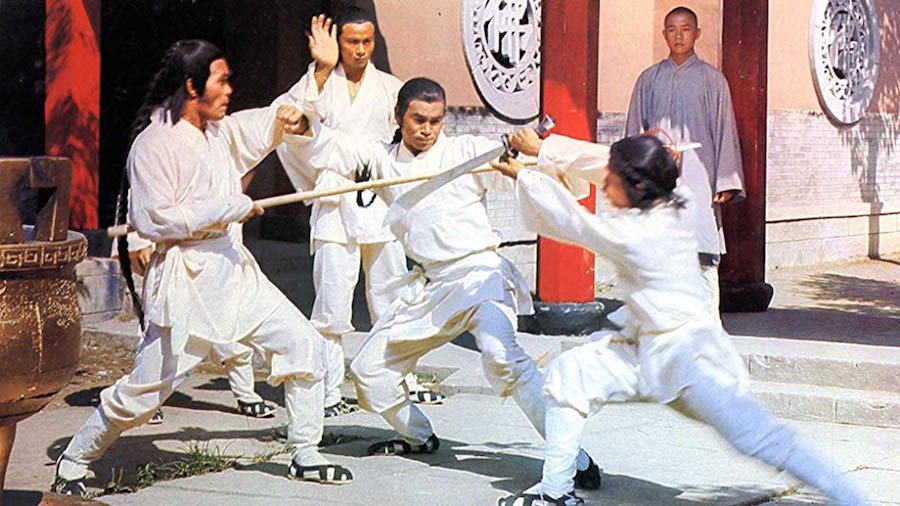 When Iron returns to the main temple, we see he has been gone for a few years. Some of the other Shaolins challenge him to prove his skills, but Iron refuses to fight. He is trying to lose his angry inner chi. The next day, the Manchus come to the temple and ask if any Shaolins would be interested in helping with security for the Manchu rulers. The Shaolin abbotts refuse their request, but afterwards Iron explains he will goto get his revenge by taking the security job for the Manchu. He tells the old abbott he will come back and totally devote his life to Shaolin only after he does what needs to be done so he can live in peace again.

While working for the Ching chief Iron gains a reputation as one of the best fighters around. The Shaolin school hear this and are dismayed. They dont know if Iron will be coming to kill them and turn his back or not. So they goto the Ching temple and take on the army. Iron fights against one of the Shaolin monks, but tells him secretly to play dead. He does and when the Ching army fighters leave, he gets up and runs back to the Shaolin temple.

Iron realizes he must end this charade and reveal his true intentions, so he challenges each of the main Ching chiefs to battles. These are some nicely choreographed fights. Iron uses his great Monkey Fist kung fu and other styles to to defeat the Ching chiefs and show he is a master. Iron then returns to the Shaolin temple to finally become one of them. As the film ends, the abbott begins to shave his head.