Invasion of The Blood Farmers/Review

< Invasion of The Blood Farmers

Invasion of The Blood Farmers starts out in a bar called The Huddle II. A guy walks into a bar, covered in pink blood and dies in the bar. They try to figure out how the man died, so a scientist gets a sample of the guys blood to test it out. The scientist figures out that the blood reproduces itself, therefore making more and more blood.

Back at the bar, they talk about seeing a funny light in the sky. The blood farmers overhear their conversation and get a bit paranoid. They somehow find out about the scientist, so they go to his house and kill their dog Buster. What one of the blood farmers doesn't realize is he dropped some type of key into the river by the house while he was killing Buster. The scientist's daughter Jenny is dating a guy named Don. When Don goes out to find the dog, he finds the key. 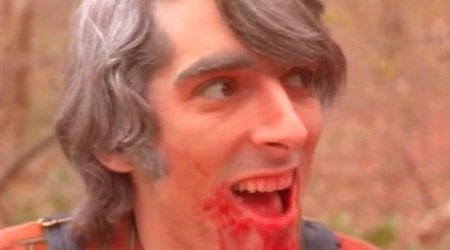 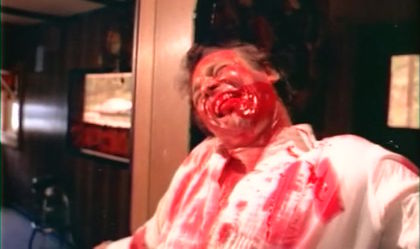 The blood farmers go to their home to talk to their leader Egon, who is this weird nerdy guy that looks to of played Dungeons and Dragons way too many times. There is also a lady that's in a plastic box. I guess this broad is their goddess and they need a certain type of blood to bring her back to life. There was something about their goddess coming back to the living to help their race.

The scientist and Don decide that they want to have somebody come and check out the key to see if it's worth anything. They call a local guy, Professor Ginsky, who happens to be part of the blood farmer cult to come over and check it out. He tells them that the key isn't worth anything and tells them that he'll take it home to investigate it further. When asked about the key later on, he tells them that it was from a bubble gum machine and it was worth nothing, so he decided to throw it away. The scientist and Don were so disappointed because they wanted to make it into a necklace for Jenny. Boy! Wouldn't she been so surprised to have a giant key to wear on her neck. Maybe they should just buy her a new dog instead. The professor with the key goes downstairs to the scientist's lab and sees that he's researching the blood. When he gets home, he tells all the other blood farmers. For some odd reason, Don decides to call their house, but there's no answer. Oh no! If there's no answer, then that must mean trouble! So he decides to rush out to go see what's going on. He goes to the police station and gets the sheriff, which happens to be one of the worst actors to ever be captured on film. After The blood farmers kidnap Jenny and the Scientist, they find out that Jenny has the right kind of blood to bring the goddess back to life, so they prepare for the ceremony. The goddess comes to life, but Don arrives just in time and kills all of them with some ring that he was wearing, which was never mentioned in the film until now. Wait! Did I miss something here? Where in the hell did this ring come from?

This movie was a bit boring at times, but if you want to see a film with some of the worst acting ever captured on film, then check this out.