Ilsa: She Wolf of The S.S./Review

It is hard to believe that the producers of this film would actually open it with one of the most insincere disclaimers ever put on celluloid: "We dedicate this film with the hope that these horrors will never happen again!" -but that is what they did. Nothing can prepare you for the stunningly insincere prologue dedication of this movie. But wait. 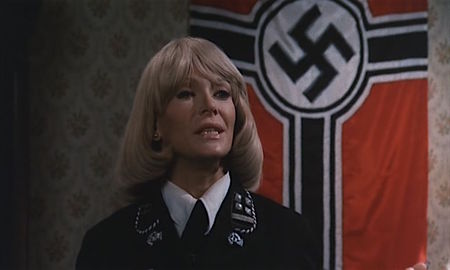 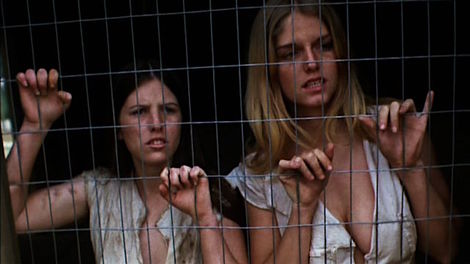 All it is, is the exact same bit of huckster-ism that all those Road Show sexual education films (like Mom and Dad) and drug movies (Reefer Madness) had been doing for years. There would be a disclaimer and a promise to offer books and pamphlets for educational purposes after the show.

1974's Ilsa is one of the most infamous of all exploitation films. This is a film as far from being tasteful or politically correct, as facts are from a politician' lips during a campaign speech. The film is a gross out exploitation shocker set in a Nazi Concentration camp during World War 2. Dyanne Thorne with a Marlene Dietrich styled accent, stars as Ilsa and she has convinced the camp's commandent to allow her to do her research and medical experiments to conclusively prove women can take more pain then men and therefore should be allowed to fight the war on the frontlines. It also allows our nympho Ilsa to have lots of sex with lots of men and torture lots of folks.

The film begins with Ilsa using a good-looking POW to try and satisfy her desires. Dyanne Thorne has a body that could have easily been in a Russ Meyer film and she displays it in her first scene in the film. The nudity is surprising. Don't get too turned on though. When ILSA says: "You should have vaited." -- be afraid, be very, very afraid. When her lover doesn't properly satisfy Ilsa, she punishes him the next day by strapping him down to the table and castrating him. Yeow!! 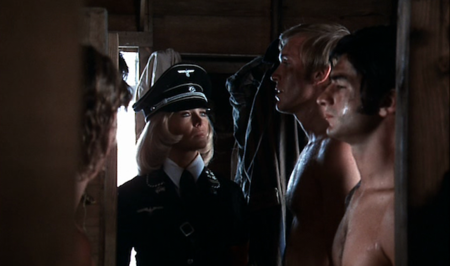 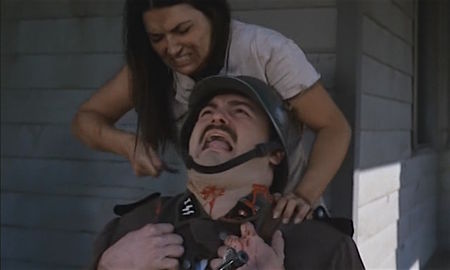 Now while we don't quite see the actual castration we see the man begging for mercy, then close-ups of sharp instruments, then a series of reaction shots and some blood. It's not the goriest scene you've ever seen, but it's a disturbing one, not for the squeamish or weak of stomach. Welcome to Ilsa. The film features bad taste, lots of naked women, and plenty of rather gruesome torture scenes. And although it was shot in 9 days with very very little money it at times is very well lit and photographed (and at other times there is no doubt you are watching a very cheap movie). The acting is extremely un-even, ranging from pretty good to mediocre to very wooden. The old Hogan's Heroes TV Series set was used for all of the exterior shots of the camp. Now if you thought that show was in bad taste...

Ilsa exists to shock and titillate. There are an extremely large number of very attractive women naked in this film. Many of them are seen in full frontal nudity. It is the pubic hair and not the violence that meant this film received no rating. The combination of the generous nudity, watching a woman being more vicious and sadistic than Hannibal Lector and wondering always just how far this film will go in depicting torture and sadism (electrified dildo's anyone?) is its appeal. It was indeed a rarity for a film to have a great looking woman as a cruel, blood thirsty, sadistic torturer of a villain. The film is unrelenting in showing women undergoing excruciating tortures. While the film doesn't have the Tom Savini type of gore effects or the money shots present in a Deodato, Lenzi or Fulci film, it is quite a gruesome film to sit through. It was a huge exploitation hit all over the world.

Well known exploitation producer David F. Friedman produced the film and even appears in it (see Friedman's 2,000 Maniacs, Trader Hornee, and check out the documentary: Mau Mau Sex Sex). Friedman however decided the film was too strong and changed his name on the credits to Herman Traeger. He let others produce the sequels. He has said in the past and on the DVD commentary that this was one of the few movies he made he was not proud of, --though he now seems to feel a bit better about it. Dyanne Thorne forever was identified as Ilsa after this film. She still enjoys a pretty successful career as a comedienne, nightclub singer and actress on stage. She is also still giving talks and signing autographs at cult film conventions and will forever be linked to the sadistic Amazonian-like fiend Ilsa. 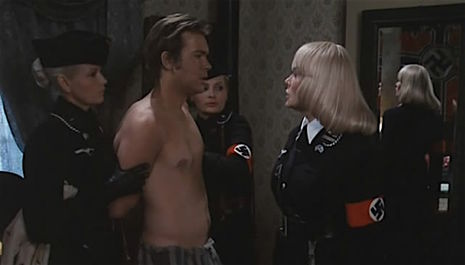 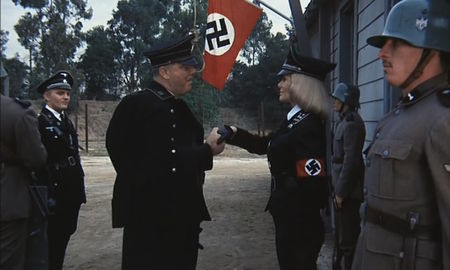 Many are going to have a problem with the fact the film is set in a World War 2 Nazi concentration camp. At about the same time Ilsa was released there were some soft-core pornos set in concentration camps being released and after Ilsa's success there were several films that out gored and grossed out Ilsa. Yet, none of them offered a villain like Ilsa or anyone with the combination of looks and charisma that Thorne delivers in her performance. She's not unlike a female Vincent Price, taking not just pleasure but pride in inflicting torture and death to her prisoners in the name of the greater good of science (or something like that). There are some truly over-long campy speeches spouted by several characters in this film. I guess you could say it is part of the 'fun'!!! That's a Grade A rating earned for everyone's audacity in creating one of the most offensive, controversial exploitation junk films ever made.