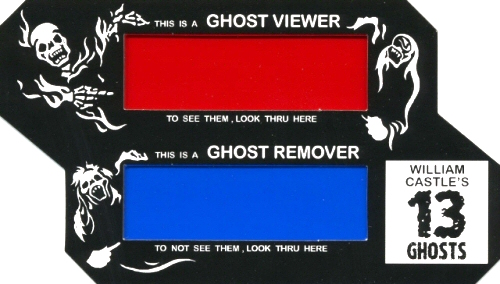 Illusion-O was a gimmick used for William Castle's 13 Ghosts in which filmed elements of the actors and the sets — everything except the ghosts — had a blue filter applied to the film footage, while the ghost elements had a red filter and were superimposed over the frame.[1] Audiences received viewers with red and blue cellophane filters. Unlike early 3D glasses, where one eye is red and the other is cyan or blue, the Illusion-O viewer required people to look through a single color with both eyes. Choosing to look through the red filter intensified the images of the ghosts, while the blue filter "removed" them.[2] As with several of his more famous productions, Castle used gimmicks to promote 13 Ghosts. Audience members were given a choice: the "brave" ones could watch the film and see the ghosts, while the more apprehensive viewers could opt out of the horror and watch without the stress of having to see the ghosts. The choice came via a special viewer, supposedly "left by Dr. Zorba".

In Videohound's Cult Flicks and Trash Pics, 3-D came in at #5 on the "Film Gimmicks" list, and "Illusion-O" was mentioned.