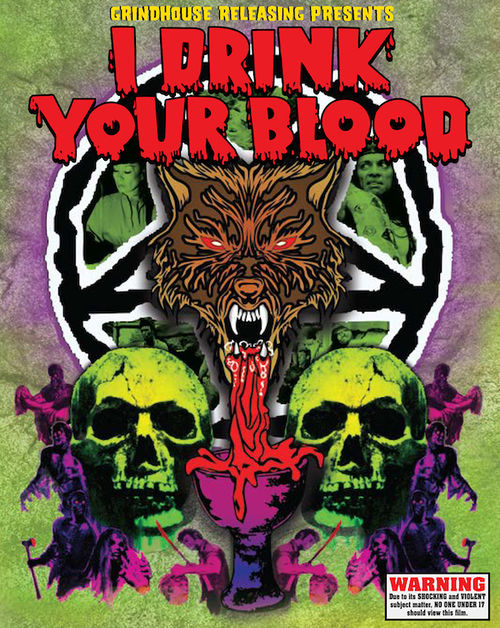 Grindhouse Releasing, the award-winning “Criterion of cult movie labels”, has set a Nov. 8 street date for the new deluxe Blu-ray edition of David E. Durston’s gruesome and graphically violent 1971 horror favorite I DRINK YOUR BLOOD. It’s NIGHT OF THE LIVING DEAD meets the Manson Family in this gore-drenched tale of LSD-crazed hippies who go on a murderous rampage through a small town after consuming rabies-injected meat pies!

Grindhouse Releasing’s deluxe 2-disc Blu-ray set not only presents the ultra-violent, uncensored director’s cut of I DRINK YOUR BLOOD in a new hi-def transfer but also includes two more vintage exploitation films in their HD debut: Del Tenney’s I EAT YOUR SKIN (1964) and Durston’s long-unseen, X-rated psychedelic shocker BLUE SEXTET (1969). Packed with new bonus features not seen on Grindhouse Releasing’s 2002 DVD release, the I DRINK YOUR BLOOD Blu-ray is the ultimate edition of a notorious “Blood Horror” classic.

The first film to be rated X for violence, I DRINK YOUR BLOOD was a huge-grossing hit at drive-ins and “grindhouse” theaters but was severely censored during its original release.

Grindhouse Releasing’s uncut, restored version of I DRINK YOUR BLOOD recently debuted in New York and Los Angeles and is now playing theaters across the U.S. and Canada.

“I DRINK YOUR BLOOD is one of the most infamous movies in the history of exploitation films,” says Grindhouse Releasing co-founder Bob Murawski. “Rescuing this lost gem was one of our most important achievements. And being able to finally unite I DRINK YOUR BLOOD with its legendary co-feature I EAT YOUR SKIN, both fully remastered in stunning HD for the very first time, takes that accomplishment one step further. We’ve spent almost a decade working on this release, and I feel it’s our finest yet. I’m also thrilled that so many theaters are playing I DRINK YOUR BLOOD. We’ve been trying to make this happen for years and have finally succeeded. Seeing this movie on the big screen with an audience is a mind-blowing experience. No self-respecting horror fan should miss this rare opportunity.”

I DRINK YOUR BLOOD stars Bhaskar, John Damon, and cult superstar Lynn Lowry (George A. Romero's THE CRAZIES, David Cronenberg’s THEY CAME FROM WITHIN, and Paul Schrader’s THE CAT PEOPLE).

A limited run of 3,000 copies of the Blu-ray will include the official “I DRINK YOUR BLOOD Horror Hypo” – an actual syringe that fans can use to infect their friends with rabies! Supplies of the Horror Hypo are not expected to last long, so fans should pre-order from DiabolikDVD.com to get the best shot at receiving one!