< I Drink Your Blood

A satanic, hippie cult have made a temporary stop in the ghost town of Valley Hills in rural New York for a ceremony. The local teenaged girl named Sylvia (Iris Brooks) then gets caught snooping around at the blood ritual. A big no-no! Andy (Tyde Kierney), one of the gang members, knows Sylivia and asks for her to be let go. But the gang's leader, Horace Bones (Bhaskar Roy Chowdhury) has a no-holds barred attitude and roughs the witness up (offscreen, by the way). 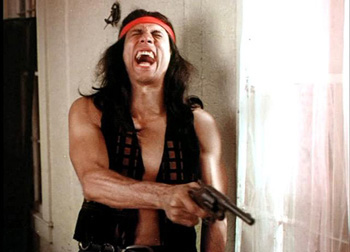 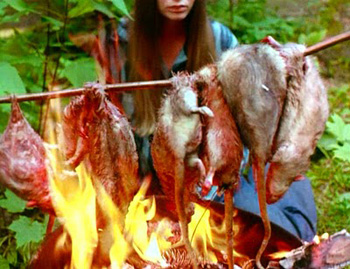 Sylvia, now barely conscious, then stumbles back into town which appears to be only inhabited by her younger brother, Pete (Riley Mills), their grandfather, Dr. Banner (Don't you love these names?) and the local baker, Mildred (Elizabeth Marner-Brooks) While Sylvia's recovering, and with everyone suspicous of Sylvia's attack being done at the hands of the nearby construction workers, the hippie gang (masquerading as a Rock Band) rent an abandoned house from Mildred. Pete tells the gang that it's a haunted house infested with rats, so this gives Mr. Bones an idea for a RAT HUNT! By the time Pete finally gets the idea that this gang is kind of screwy, Sylvia has regained consciousness and tells her grandpa that it's the gang who's responsible for roughing her up. Armed with a shotgun, Gramps is still no match for the hippies as he gets slapped around and forced to fry on acid! With a whooped sister and a doped up grandpa, Lil' Pete takes matters in his own hands. But before he could even make it to the crib of the hippies, he gets attacked by a rabid dog which he shoots dead on sight. Light bulbs pop up into the kid's mind because (Thanks to grandpa's advice for being a vetrenarian) the plan of revenge will involve Pete extracting the blood of the dead dog and contaminating pies at the bakery from which the gang will eat from! Sure enough, the next morning, all but one of the gang eats the pies and...Well, things don't quite go as well as Pete might have planned. Soon after, the rabies-infected pies slowly have the gang descending into madness by killing one of their own. The remaining members soon run like hell, and one of them (The nymph of the bunch) gets forced to act as the sexual relief for all the nearby construction workers. But little do the workers know that they'll get a little taste of rabies in their system. So...All hell breaks loose and bodies pile up by the dozens...until Mildred, Sylvia, Andy and Pete are cornered by the horde of killers. And-- I will say this: the little bastard lives another day to have another entire town wiped out if he wishes! 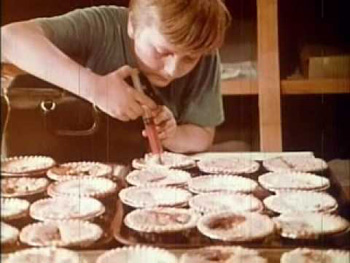 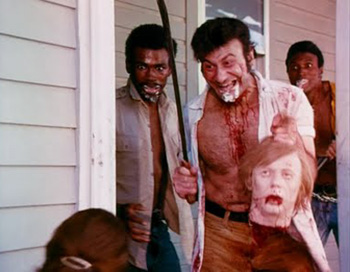 Boy, do I love this one. Instead of just being a 'run of the mill' horror flick, writer/director David Durston manages to make everything work so well that it exceeds being a simple genre film and turns into something more important. You have to realize that this is 1970 and things in the cinematic landscape are changing. Filmmakers are now free to break rules and go as far they prefer to go. This allows Durston to up the ante in the fresh new world of gory effects and shock value. But at the same time, a good old fashioned monster/paranoia movie from the 1950's is evident within the film's storyline. Even the mannerisms and skill of some of the actors is a throwback to the old days. So if you combine this with hippies, satan, sex and drugs, how can you go wrong? The movie also has considerable Grindhouse charm with the film stock resembling a worn & torn Super 8-look, plus the sly music soundtrack provided by Clay Pitts which is an EXCELLENT mishmash of shrieking, gothic keyboards and cheesy rockabilly intensity for the climactic chase and fight sequences. It seems that it doesn't matter if I were able to see every exploitation/grindhouse that was ever made (And we're talking a looong list here) I DRINK YOUR BLOOD would still be sitting comfortably and respectably in my top five favorites.