Granny Good's School for Girls is one of the most prestigious finishing schools in the nation, but there's more to it than just the usual reading and writing. Granny Good (Bob Creese) herself also happens to run a rather lucrative distilling plant in the school's basement and supplies a great deal of illegally made alcohol to mobsters and the like. The feds are onto her, though, and have planted a mole in her midst to uncover the plant and bring the matron's business crashing in around her. They plan to strike during her annual Halloween Ball, but some spiked punch, a werewolf, and more naked breasts that you can shake a stick at may hamper their bust in more ways than they had anticipated.

Produced by and starring lovable Bob Creese (and adjective that most people who knew the man will tell you was wholly inaccurate), House on Bare Mountain is a goofy nudie cutie done in a style that would eventually come to be associated with the likes of Benny Hill, though featuring far more in the way of actual nudity. Almost everything is in place here: a man dressing up like and playing a woman (though Creese is doing more of a Jonathan Winters impression here), a bevy of beautiful girls that flaunt their ample assets, scenes sped-up for comedic effect, dopey double entendres, and silly chase scenes. If I didn't know any better, I would say that the British comedian got many of his ideas from House on Bare Mountain and films like it.

Yes, the film can be as grating as other nudie cuties such as Kiss Me Quick, thanks to its sometimes ridiculous use of puns and incredibly bad jokes (such as a character ASKING another one how to pronounce mausoleum), but there is an energy here that doesn't seem to be in the other films. I was also surprised to find that there was some semblance of a plot here beyond just the standard excuse for the main character to stand around ogling naked women. Though it certainly won't win any awards for the material, I was quite pleased to find that I was actually interested in the story and really did want to find out what was going to happen at the end (though I do have to admit that I found the ending to be a little TOO tidy in wrapping up the story). 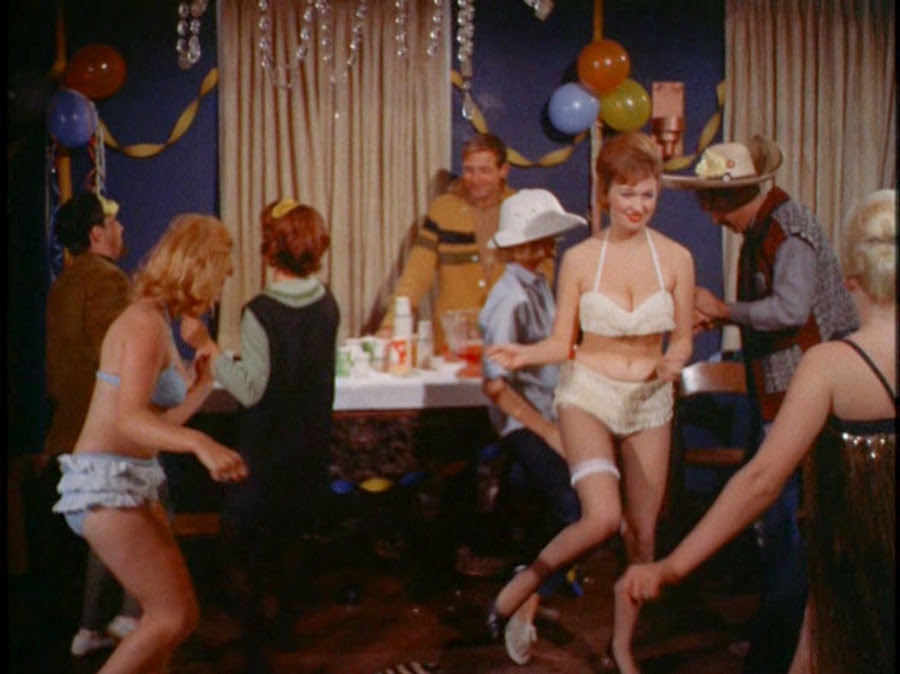 Despite the fact that the only real monster in the film is Granny Good's werewolf Krakow and he spends most of the film in the basement working on the still, this film was advertised as having monsters meeting 20 lovey (?!) models. I suppose they were counting the guys dressed as Dracula and Frankenstein that appear at the big party that ends the film, but they are only participating in the costume ball, so I don't feel that could be counted. As for the 20 lovey models, there are certainly some very attractive girls to be found here (and all in a glorious state of undress). One scene in particular, where Granny Good takes the girls out for a workout, is a highlight of the film thanks to its copious nudity (and its very Benny Hill-like moments of comedy). My favorite moment during this sequence involves an ironic reversal of the art class nude study, where the subject being drawn is fully clothed while all of the artists are completely in the buff.

House on Bare Mountain has been released on DVD as part of a Monster Nudie Double Feature (along with Harry Novak's Kiss Me Quick!) through Image Entertainment and Something Weird Video. The film is presented in the full frame format and the print used for the transfer actually seems pretty decent for a film that is thirty years old. As usual with Something Weird's releases, there are also a ton of extras included (all of which are detailed in the review for the Kiss Me Quick).

If you are a fan of all the old nudie cuties, then this is definitely a disc that you will want to pick up. Although Kiss Me Quick isn't as spectacular as it could be, House on Bare Mountain certainly makes up for everything the other film lacks.