When it comes to Japanese entertainment, people tend to stereotype it as the most outrageous place for TV shows, commercials and movies. I visited Japan two times in my life and whenever I turned on the television, I noticed the commercials weren't as insane as what we see regularly on YouTube. I definitely think Japanese commercials are gorgeous with their stunning concepts and beautiful cinematography. The TV shows mostly consist of panel discussions, variety shows or baseball. Regardless, all the insane stuff from Japan is always there for you to seek out and enjoy....and that's what I'm gonna tell you about now. House (a.k.a. Hausu) is a Horror/Drama/Comedy from 1977 that has become a cult classic due to its inherent weirdness. 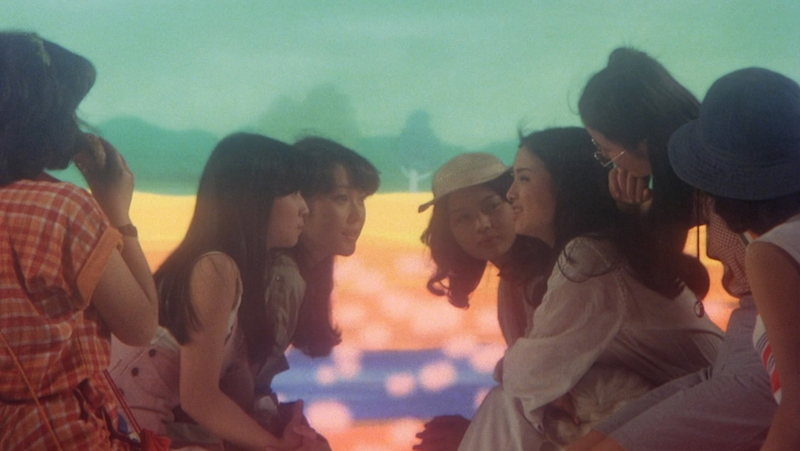 The plot itself is simple. It involves a group of seven girls named Gorgeous, Kung Fu, Prof, Fantasy, Mac, Melody and Sweet that decide to take a trip to a beautiful house in the countryside. What they don't know is the fact that its owner, Gorgeous' Aunt, likes to eat unmarried women. As the story moves on we learn about the background of Gorgeous. She asks her father whether she can go on a summer trip with her friends or not. After finding out that he married a new woman (her mom passed away years before) she decides to leave him and tell her friends she can go to her aunt's house instead. Her aunt's backstory is tragic and pretty sad. She was about to get married but her boyfriend had to join the Air Force during World War 2 and later died. So poor Auntie has missed him ever since and also became a piano teacher. This is a good method in the script to bring tension to the situation and an added dimension to a character...in a film that doesn't belong in the reality at all. 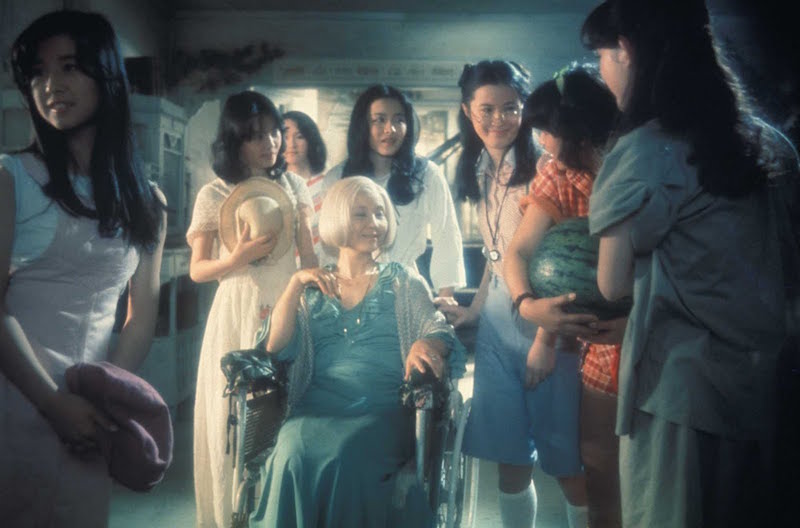 I've heard that many viewers have a hard time getting through House since it has many weird elements. First, the plot. As I said, this is a Horror/Comedy. In fact, there are scenes that remind me of Evil Dead 2 in terms of their over-the-top death scenes and practical effects. There are characters that get killed in the most unrealistic ways you could imagine. The most famous example is when one of the characters is eaten by a piano. To make things even more strange, that particular scene isn't shot in the typical way (like the piano eats a girl and the blood splatters), there are wacky things like the leg and arm thrown away from the piano to a fish bowl or flashy lights everywhere around the room. It's as chaotic as you can get. If you constantly remind yourself that this is a fantasy-based kind of Horror and don't take it too seriously you'll enjoy it. 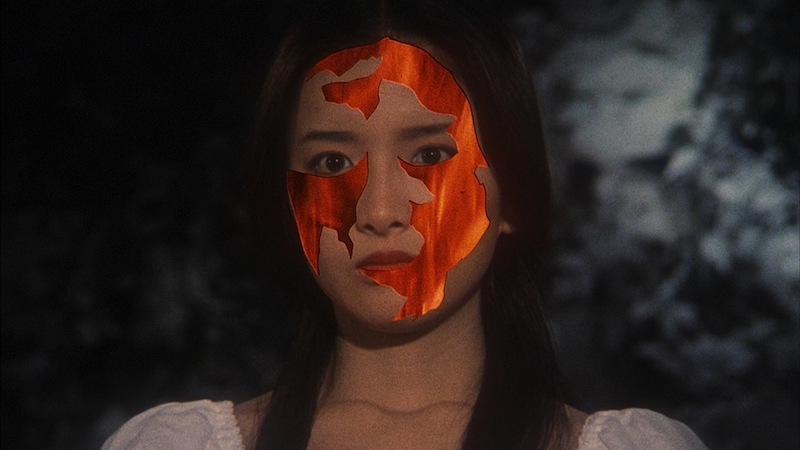 Next, the atmosphere. There are many scenes that were filmed in a really unique way and somehow provide us with an interesting narrative and could be symbolism. For example, the very first scenes of the film is Gorgeous and Kung Fu walking around and playing with each other. It has quick-cut editing, cheerful music and lighting. That scene is so joyous I'm not sure whether it's supposed to be a parody of teen flicks from around that time or not. Also, there are several scenes that use matte paintings for specific reasons. Like when Gorgeous talks to her rich father. They deliberately make it look like a house with a beautiful sunset which would belong in some TV commercial instead (we'll get into that soon). Or the scene with the girls standing in front of a train station. The matte painting looks cartoonish like it's teling us that we are going to an alternate universe that doesn't belong in the same reality. It's wholly distinctive and intriguing. Then, we have the special effects. They range from live practical effects to the use of blue-screen, which I'm pretty sure was edited on videotape and then converted back to film. Although the blue-screen looks pretty dated and fake, it still fits the wacky tone of the film well. 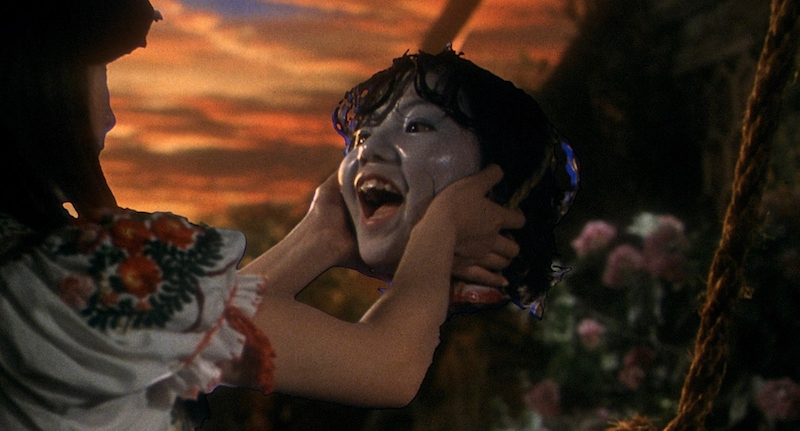 And speaking of the wackiness, there's a reason behind it, namely the director Nobuhiko Obayashi. Besides the fact that his daughter came up with the whole concept of this film, he had been working as a TV commercial director. His commercials look amazing. For instance he did a Calpico commercial (which, according to sources, was the first time Nobuhiko met the actress who played Auntie in this movie). It's just an ordinary beverage commercial, but it sets the tone that this is the drink for your luxury dinner from the POV shots of drinks in the cart to a scene when a couple mixes ingredients and then drinks. But his most famous advertisement is probably a two minute commercial for the aftershave product "Mandom" starring Charles Bronson. It features everything that you're about to see in House: quick cut edits, scenes that don't make sense in reality but fit the mood of the moment, nice matte paintings, and gorgeous set design. If you can watch this ad without feeling that it's too chaotic, maybe you're ready for House. 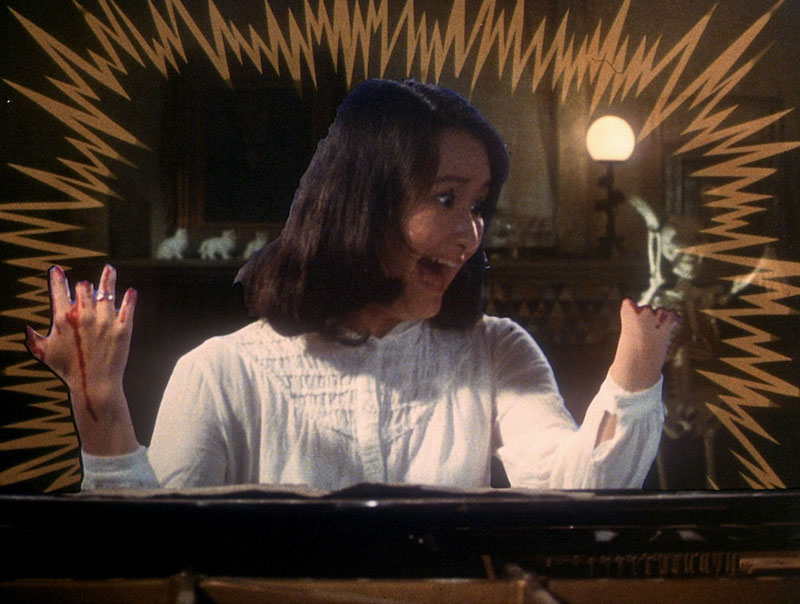 To sum up, House is a really unique experience. I'm sorry that I can't get into all the details about what exactly is going on in it. It's better for you to simply watch and enjoy one of the craziest and most memorable cult films from Japan. Highly recommended.