In the 1970s, regional exploitation cinema was something that was created for smaller markets around the country. These kinds of independent films were produced, shot and promoted in specific states. Hot Summer in Barefoot County is a great example of Southern rural regional exploitation. 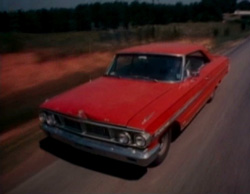 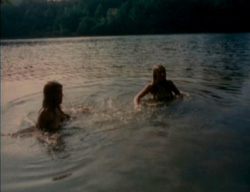 Things kick off fast from the start. We meet Mary Ann Hogan, a hot little mama doing a drop off run for her family's white lightnin' business. The law is already hot on her tail. Sheriff Bull Tatum is the pudgy black bearded officer who has been chasing Mary Ann for months along with his deputy Clyde. Unfortunately (for them), the two keep getting shutdown due to Mary Anne's suped up red sportscar which she uses to fly back and forth from her farm to a restaraunt where she sells her wares to the owner who then sells the "stumphole" to customers under the table. Since Sherriff Tatum can't seem to catch Mary Ann, the higher ups in the state office decide to send an officer named Jeff Wilson down to Barefoot County to investigate. Jeff's idea is to go undercover so he'll be able to get information on the secret moonshining operation without calling attention to himself. Jeff drives down to Red Rock County (aka Barefoot County), where he is run off the road by the local sex addict/bully Culley Joe and his friends who are acting like crazy loons. NOTE: Culley Joe is one of the characters in the movie that stands out the most. To make things more interesting, his main love interest is none other than Sheriff Bull Tatum's daughter Nadine!

Mary Ann's mother Stella and her sister Rosalie happen to be driving by and they see Jeff's crashed car on the side of the road and stop to help him. They bring him back to their farm and fix him up. When Jeff finally wakes up he joins Mama Stella and her three beautiful daughters for some breakfast. We see right off that Jeff and Mary Ann have eyes for each other. Jeff explains to the ladies what happened to him and that he's from upstate but passing through looking for work. Stella tells Jeff she knows a diner owner who might be looking for help (the same diner owner who buys the 'shine from her). This sets Jeff up perfect so he can inquire secretly who is behind the local moonshining operation. Little does he know that he's at the very farm where the moonshine is being made. Since he is smitten with Mary Ann, his detective work gets put on the backburner. 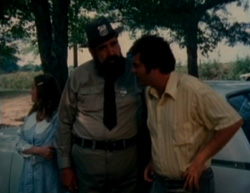 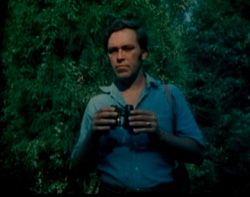 Meanwhile, Sheriff Tatum sets up some roadblocks as another way to catch the mysterious moonshiners. When Mary Ann is cruising along and spots the roadblock, she quickly spins around and heads back the other way. Sheriff Tatum and Clyde decide to follow, but then they see Mary Ann is heading straight at them. She runs them right off the road into a cornfield. Sheriff Tatum is becoming suspicious of The Hogans so he and Clyde pay a visit to the farm. Clyde looks around in the barn where he is startled by two of the Hogan girls who proceed to pull his shirt and steal his hat. In one of the funniest scenes in the movie, Clyde runs out to the sheriff screaming that the girls are trying to RAPE him!

Hot Summer in Barefoot County really surprised me because I didn't expect it to be so dog-gone entertaining. Especially knowing that it was a regional exploitation film. What was most impressive to me about it was that the film never fell into any of the typical trappings you'd expect from a low budget movie. Its always popping with emotion, action and humor. All the actors are excellent. The girls in the film are sexy as all get out (especially when theyre wearing their little Daisy Duke shorts). They give great southern fried performances and even some of the more corny lines of dialogue are delivered with a sincerity which makes it believable. The tender scenes between Jeff and Mary Ann are really nice too. The small hick town atmosphere of the movie gives it alot of charm. The road scenes with Mary Ann drivin her red sportscar through the country roads while being chased by Sheriff Tatum are very exciting to watch. This movie plays like a mix of Thunder Road meets Smokey & The Bandit meets the Petticoat Junction TV show. It pulls you into its high falutin' moonshinin' world and doesn't let you go. I highly recommend this film to fans of the genre!