One of the strangest installments in the 70s action genre is Oscar Williams' Hot Potato. Williams previously wrote the script for Black Belt Jones, which injected a level of zany urban humor that wasn't previously seen in martial arts movies up to that time. In Hot Potato, Jim Kelly is back as Jones, although its never stated if he is in fact Black Belt Jones or just a new character with the same last name. 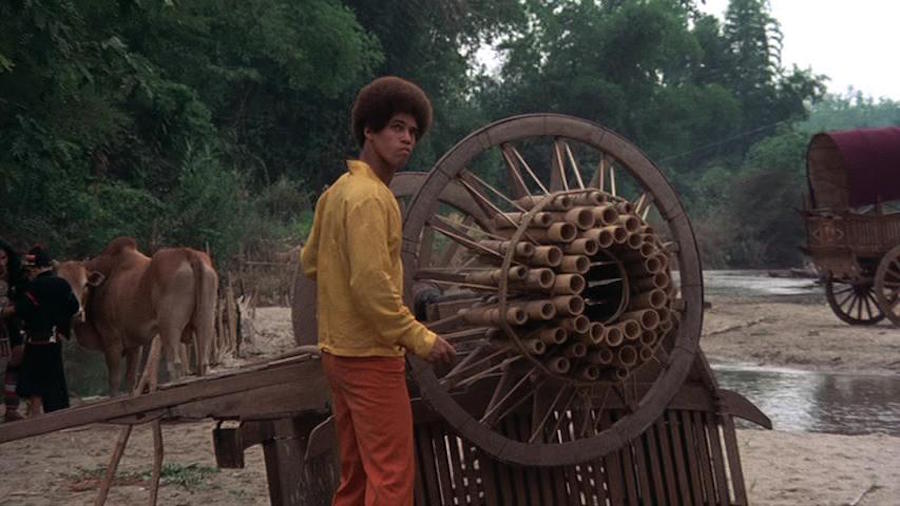 When a US Ambassador's daughter is kidnapped in the fictional country of Shang Lung (supposedly somewhere in Southeast Asia), Special Agent Jones and his partner Chicago (Geoffrey Binney) arrive to investigate the kidnapping and hopefully rescue the woman. The evil Fu Manchu-esque villain holding Leslie (Judith M Brown) hostage is Carter Rangoon (Sam Hiona), a man who likes to feed people to his pet tigers. Rangoon threatens to kill the Ambassador's daughter if he doesn't stop a foreign aid bill from being passed so he can keep control over the country. Jones and Chicago's contact is Pam (Irene Tsu), a sergeant in the Shang Lung police force. Pretty quickly she is shown to be a formidable fighter when we see her take on a group of punks who walk in front of her jeep. Pam kicks all their asses in a way that would make Bruce Lee proud while screaming repeatedly to Jones that "I can handle it!" when he tries to help her out. The three then go to a local cafe where they pick up a fat guy named "The White Rhino" (George Memmoli) who is taking part in an eating contest with a very heavyset woman who he proceeds to beat after she collapses from exhaustion. The White Rhino's prize is three Shang Lung hookers. Nice! After this fun scene, Jones, Pam, Chicago and the Rhino take off into the jungles of Shang Lung to try to rescue the Ambassador's daughter. They find a village where she is being held and decide to break in using...elephants. A very outlandish action sequence follows and a remote control toy police car makes a cameo. For what reason I have no clue. From this point on, Hot Potato turns into a wacked out jungle safari film where nothing makes that much sense. George Memmoli's The White Rhino character is the comic relief and he proceeds to paint the jungle red with his semi-kooky antics, while Chicago falls in love with Leslie or June (both played by Brown) and Jones gets it on with Pam. The Rhino even gets his own love interest in the form of a villager who has a child that he bonds with. 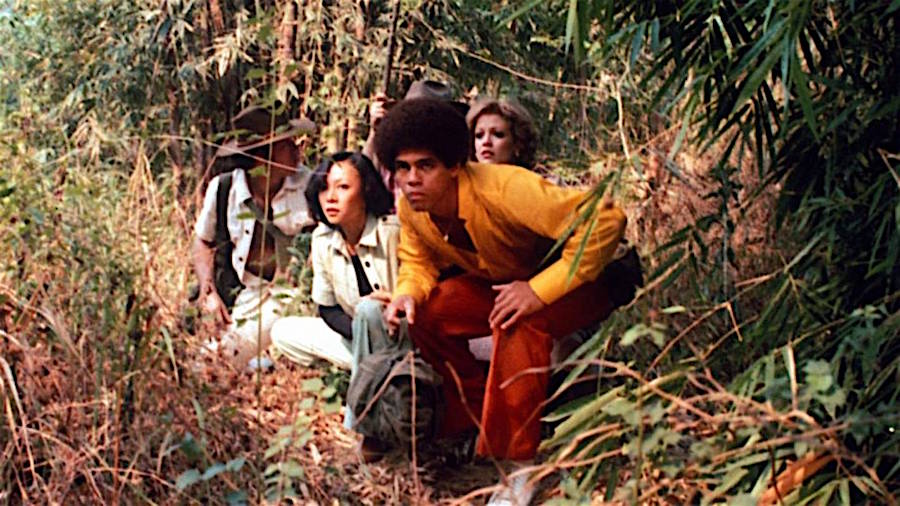 When Hot Potato was released in 1976 it was often shown on a double bill with Enter The Dragon. If you watch these two films back to back, you'll probably be scratching your head, wondering what Oscar Williams was smoking when he came up with this script. Hot Potato is certainly nothing like Dragon, in fact its almost an experiment in comedic (if you can call it that) filmmaking. Also seeing George Memmoli in this was just plain weird being a longtime fan of his work in Mean Streets and Phantom of The Paradise. Why/How he was cast is a mystery to me. This is not really a movie I'd recommend to exploitation fans unless you're a completist who wants to see every 70s Jim Kelly film. Its watchable and semi-entertaining, but it lacks any sense of coherency and doesn't really deliver a lot of thrills. Its filled with a lot of "what the hell?" moments. It has a few laughs maybe, but they aren't plentiful or substantial and the Hanna-Barbera cartoon sound effects don't exactly help. I'll mark down Hot Potato as a genre film that I was interested in seeing, but ultimately didn't live up to what I was hoping for.