Donn Davison serves up a heapin' spoonful of low-budget backwoods chicanery involving a motley crew of jewel thieves who run out of gas on a secluded country road and cause all sorts of trouble for the residents of a nearby shack once they commandeer the house for their temporary hide-out.

The stranded group of law-breakers includes Philip, a balding middle-aged man with a bad English accent delivering corny lines like “It would appear that we have run out of petrol;” his unbelievably tall girlfriend Susan who swaggers around in white go-go boots and barely-there shorts with her ass literally hanging out the bottom, and young punk Kirk, who enjoys slapping around his dopey hippie girlfriend Karen. This bickering group of malcontents arrive on the doorstep of sweet n sexy Reba Sue, who gladly accepts the visitors into her home in the best of good ‘ol country hospitality. 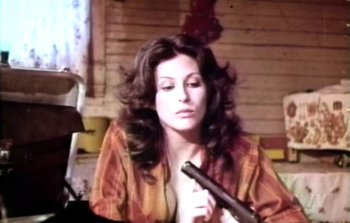 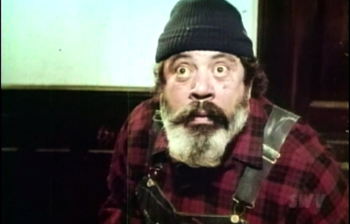 Reba Sue's husband arrives at the house a short time later, a bug-eyed slob named Harlan who makes a living selling his home-made corn likker to the locals with the aid of his dim-witted friend Tobey. Harlan is a bible-thumping drunk who does little more than stare bug-eyed at the ample chest of Susan, while the gang decides to make themselves at home, and commandeer the operation of Harlan’s moonshine racket.

Following in the wake of the new regime is plenty of lust, murder and greed; Kirk accosts Reba Sue after chugging a bottle of Pabst Blue Ribbon, enticing her to bite off as much as she can take because he's noticed that her old man shows zero interest in her. Reba Sue finds the offer hard to resist and straddles Kirk in her bedroom. Susan spies the two fooling around and immediately runs to tell Karen that Kirk is cheating on her. Karen bursts into the house and interrupts the joyful union, tossing Reba Sue across the filthy living room floor before Reba Sue abruptly ends the tussle with a fatal whack to Karen's skull with a moonshine jug. So begins Reba Sue's downhill tumble into depravity, sparked by smoldering lust…..

Later in the day, Harlan and Toby accompany Kirk out to their still to prepare a shipment of moonshine. Harlan escapes by grabbing Kirk’s gun (the old, “Is that a real gun? Can I see it?” routine!), and then rams a pitchfork into his throat; a bloody effect accompanied by a hilarious barrage of choking and spitting sounds loudly dubbed into the soundtrack as Kirk grasps at the pitchfork's handle. Tobey and Harlan roar outta the yard in their pickup truck and accidentally run over Susan – a most inglorious end to the towering actress, the most weirdly entertaining member of the wacky cast – while Philip roars after them in his jeep. The whole mess ends with a foot chase through the woods; Harlan strands Tobey after he gets his leg caught in a bear trap, then manages to ambush Philip, beating his brains out with a tree branch. Through all the mayhem, a preacher billed as “Brother Love” in the closing credits, is spliced sporadically into the action to warn of the evils of treachery and greed, etc., while waving a Bible into the air.

Meanwhile, back at the cabin, Reba Sue seems to have gotten over the shock of killing somebody, contemplating a .45 revolver that she turns slowly in her hands. Harlan arrives back from the chase, rambling on about the satchel full of jewels left behind by the crooks and how he can finally leave town with the loot and make a good living. With evil lurking in her eyes, Reba Sue slowly lifts the gun, a loud gunshot rings out, and the film freezes over a frame of Harlan’s ugly mug while the quote, “The Lord Giveth and the Lord Taketh Away” flashes on- screen accompanied by the voice of Brother Love reading the text out loud.

Whatever happens to Reba Sue is left to the imagination, although word has it she ended up leaving for the big city and appeared in a few x-rated features like Tinseltown. During the end credits, a jaunty tune featuring kazoo and a gal merrily singing about some guy’s yo-yo, how she’d like to hold it, and how she’d cut that yo-yo string in two if the guy breaks her heart swells on the soundtrack! Considering the killing and treachery that just transpired, this song couldn’t be more out-of-place; however, the allusions to yo-yos is significant, revealing director Donn Davison as the song’s inventor. Donn was a self-made entrepreneur chasing the dollar under many guises including magician, Spook Show promoter, film-maker, adult theater owner, and official Duncan Yo-Yo stunt expert! I guess he wanted to write songs too. 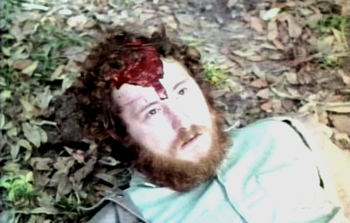 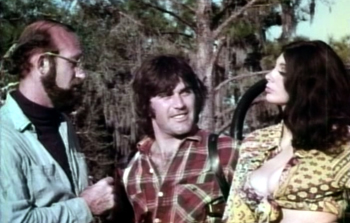 Wow. Davison’s home-made slap-dash production jitters along on a barely-there plot, delivering the occasional bloody confrontation supplied by a weird cast of characters that includes the eye-catching Ashley Brooks as Reba Sue and the unforgettable Trudy Moore as ill-tempered Susan. Trudy, a slack-jawed brunette, spills out of her tight clothing and towers over the other cast members; she looks half asleep for her entire performance, and delivers dialogue as though attempting to talk with a mouthful of marbles after guzzling a pink of whiskey! This eclectic group of hillbillies and cut-rate thieves maintain audience attention while they slap, yell, curse, seduce, bounce, and kill their way to the bitter end.

Although the action is supposed to unfold across the mountainous region of the Carolinas, the absence of mountains, or even a hill or two, along with the sandy roadbeds and moss draped tree branches captured on screen places this production somewhere farther south, most likely Florida. This slice of regional exploitation film-making has had a remarkably long life, playing in theaters multiple times under different titles, from the original Shantytown Honeymoon to things like Hillbilly Hooker! As recently as 1986, low-budget film maker Fred Olen Ray obtained a copy, shot some additional footage of John Carradine as the “Judge of Hell,” spliced his new footage into the film, and sold it to Troma, who re-birthed the backwoods wonder under the title Demented Death Farm Massacre: The Movie.