I first learned of Jack Starrett's 1976 crime B-film Hollywood Man from reading up about it after it played at one of Quentin Tarantino's Austin Film Fests back in 1997. Ever since it was a film I searched high and low for but was never able to find a copy of. Many years later I finally ran across a full version on YouTube (which has really become a godsend when it comes to tracking down old movies). Well, I was very pleased to discover once I watched it how much fun it actually was. The movie opens with one of the most memorable songs I've ever heard. The ballad by charismatic crooner Tony Chance is sung with an emotional sincerity and exuberance as he proclaims "Hollywood Man/They call me Hollywood Man/Too proud to stand aside...". The lyrics give us our thematic introduction to the main character, Rafe Stoker (William Smith) who is an enthusiastic movie director trying to complete his latest opus: a biker film. The only trouble is he's run out of financing. With no money to complete the film, his producer suggests he turn to a loanshark or more precisely The Mob to get the cash. In a desperate move (and going against his better judgement) Rafe does just that. What he doesn't know is that once he agrees to the terms of the "contract" set up, the mob boss Mr. Russo (Angelo Farese) has his own shady plans. Russo hires a psychotic thug named Harvey (Ray Girardin) to help him ruin the film. With support from his girlfriend Julie (Mary Woronov) the actors and technical crew including the daring stuntman Barney (Don Stroud) Rafe soldiers on, doing his best to keep the production on schedule and dodging each problem as it comes. Meanwhile Harvey, his blonde floozy Buttons (Jennifer Billingsley), faithful pal, the oafish Mr. Rhodes (Jude Farese) and the rest of his gang do their best to cause havoc for Rafe & Co. 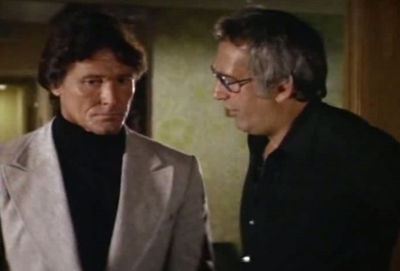 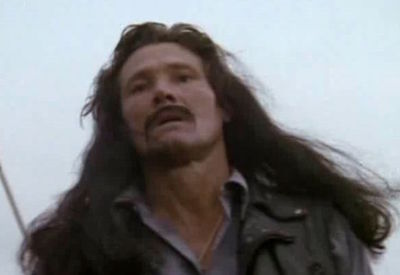 One thing that set Hollywood Man apart from other low budget fare of the day was that it belonged to the "Movies About Movies" subgenre. This gave it a more artistic edge and it actually does a superb job at showing what making a film is really like from behind the scenes. It looked at both the obstacles faced as well as the joy it brings when things go right. There are some really exciting car and motorcycle stunts featured to give it the blast of energy it needs as well. Star William Smith who was a veteran of biker films like Run Angel Run, C.C. & Company, The Losers and often played heavies, this time got the chance to be the good guy. Smith is excellent as Rafe although the real standout performance in the film for me happens to be co-star Ray Girardin (also co-writer) who plays Harvey. The main reason being he is a complex character. You get the sense that while tough talking Harvey fancies himself the top dog, even his own gang don't really respect him or take his status seriously. Moreover, he is a completely unpredictable loose cannon and that really makes the story even more intriguing and provides a very important dose of suspense to the proceedings.

Claude Ennis Starrett aka Jack (1936-1989) began his career in directing with The Girls from Thunder Strip (1966). After that he acted in several biker classics like Hells Angels on Wheels (1967), Born Losers (1967) and Angels From Hell (1968). He also had a small but very memorable role in Blazing Saddles (1974) as the town drunk Gabby Johnson and in First Blood (1982) in which he played the brutally sadistic police deputy Art Gault. Other films Starrett directed include: Cleopatra Jones, The Dion Brothers, Race With The Devil and A Small Town in Texas. Starrett truly was one of the finest genre directors of his day. We highly recommend seeking out all these great B-movies.