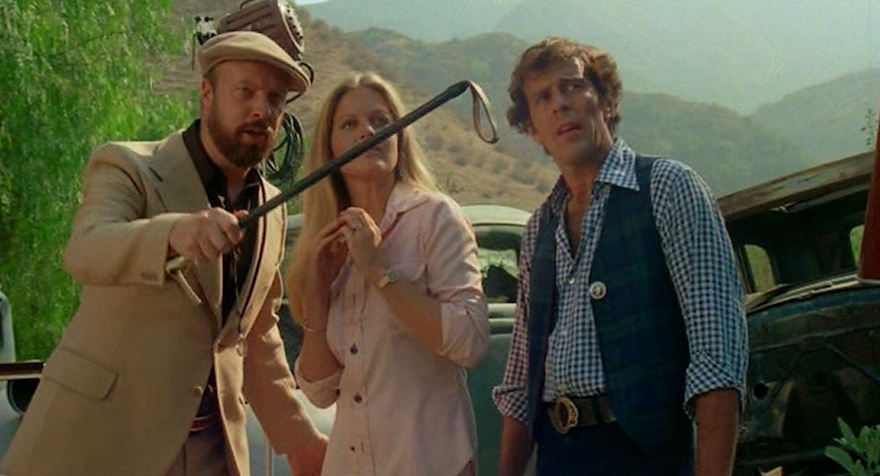 Candy Hope (Candice Rialson) is a beautiful woman who has come to Hollywood with the hope that she can follow the "American Dream" and become a huge movie star. When she arrives in town, she is instantly signed by agent Walter Paisley (Dick Miller, using the same character name he had in A Bucket of Blood) and given a job as a stuntwoman for the low-budget B-movie studio Miracle Pictures (If it's good... it's a Miracle!) because the last one had died during a skydiving stunt. Sensing her enormous talent Miracleís head producer P.G. (Richard Doran) and director Von Leppe (Paul Bartel) decide to give her a more prominent role in several of their films, setting off a pissing contest between herself and the studio's head diva Mary McQueen (Mary Woronov). Close to the same time this occurs, though, other Miracle stock players start to die off and Candy finds herself in the unenviable position of possibly being the killer's next victim.

Gremlins director Joe Dante and television show director (including episodes of "The Practice", "Ally McBeal", and "Dawson's Creek") Allan Arkush both got their start on this homage to Roger Corman's New Horizons Pictures that was yet another film in Corman's oeuvre to begin as a bet. Producer Jon Davison bet Corman that he could make a film for less than $60,000 and Corman accepted that bet wholeheartedly. With the limited budget in place, directors Dante and Arkush got together and shot the script they had in ten days and based many of the scenes around stock footage from other films in the New Horizons library. Thus Hollywood Boulevard was born.

Part of the appeal of watching this film is all the other movies it borrows footage from to make up its running time. Although much of the footage wasn't readily identifiable to me (thanks to several of the scenes being from some Filipino shot Corman films that I had previously been unaware of), the scenes that were recognizable came instantly. Footage from Big Bad Mama and Death Race 2000 is seamlessly edited into the story and seems to fit perfectly within its framework, but such diversions as a clip from the roller derby film Unholy Rollers seems oddly out of sync with the rest of the film. Most of the rest of the clips are edited so perfectly that, for someone who has never seen any of them, this film will seem almost as if everything in it was actually written and shot for it.

Besides the numerous stock footage scenes, Hollywood Boulevard also offers up some pretty decent humor. Since the whole film was designed as a Roger Corman tribute, more or less, the script is full of tons of inside jokes made in homage to the director/producer. Though you really don't need to be a Corman scholar to get all the jokes, a little inside knowledge of the way he sometimes works does come in handy. For those that don't know a lot about the man, though, there are also some pretty decent throwaway jokes, too (several of which have to do with a character dressed in a Godzilla-like costume).

The only real problem I have with the film is that the main plot (the murders of the B-movie cast members) doesn't even start until it is almost forty minutes in. For the first half, scattered jokes are all we really have to go on (as well as some gratuitous nudity that is sorely lacking from many of today's films), which isn't a firm basis to set a film on. Once the plot does develop, we are given very little time to figure out who the murderer might be before the script goes ahead and tells us then chugs right along to the climax. Despite the rampant gags, a little more time to get involved in the plot would have been greatly appreciated.

Hollywood Boulevard has been released on DVD as part of New Concorde's Roger Corman Classics collection. The film is presented in the 1.85:1 aspect ratio and looks fairly decent for a film that is almost twenty-five years old. Included on the disc are cast and crew bios and trailers for some of the films that were used as stock footage, as well as a batch of trailers strictly for New Concorde films being released on DVD. The packaging lists a "live" performance by Commander Cody and His Lost Planet Airmen, but the only performance I saw from them was in a clip from the film (which doesnít make it an extra if it is part of the film). Oddly enough, the packaging also lists the original trailer, which is also nowhere to be found.

Actually listed on both the packaging and appearing ON the disc is a feature length commentary track by directors Joe Dante and Allan Arkush, as well as producer Jon Davison. The three tend to mock the film quite a bit while watching it and actually run out of things to say early on, so sometimes they just comment on not having anything to say. They do point out the stock footage when it shows up and also discuss some of their other non-Corman homages (like a Mario Bava homage that occurs in a murder scene towards the end of the film), but they seem more embarrassed by the film than anything else. It is probably not the most informative track in the world, but it does have its fair share of laughs.