What if someone edited a movie out of scenes from The Big Doll House, Women In Cages, Night of the Cobra Woman and other flicks of that type? Well, Joe Dante and Allan Arkush did. It was before the time you would associate a name especially like Dante with the big screen and blockbusters like Gremlins for example. Both of them had been editing trailers for the infamous Roger Corman back in the seventies, when they thought they could do pictures like that - maybe even better. If you do think Corman was supporting young talents or abusing them for a quick buck, he at least didn't say no. With $50,000 in their hands and a key to Roger Corman's garage, Dante and Arkush after brief consideration remembered, how directors made full features literally out of nothing. Just count how many releases have been editing in the original One Million B.C., like Bert I. Gordon did on King Dinosaur, where he barely shot more than two couples in diving suits and something like a cardboard tube for the rocket. The keyword here is stock footage. 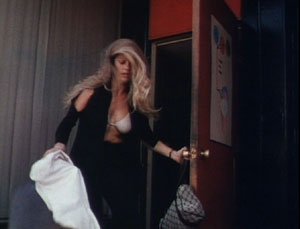 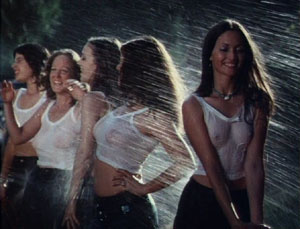 Conveniently, pals Joe Dante and Allan Arkush had all of Corman's productions available. Luckily they even had a certain number of original props like a cool car from Death Race 2000. They still needed something to join all these different pieces of film together: a story. Well, something like a plot. You can hardly tag it as an example of Shakespearean narrative structure. It is more like you could enter or leave the theater at a random moment without having the feeling you missed something. This was an artistic component of the concept David Lynch had in mind for his film Mulholland Dr., so there must be a disposition on this type of itineraries. For Hollywood Boulevard the creators had been taking advantage of being involved into the making of exploitation features and they did not hesitate to profit from gossip and rumours surrounding the industry as well. Of course there is no way to do this in a serious way, so it became a giddy movie within a movie comedy.

Having the connections, the fuzzy plot around naive lassie Candy Hope seeking fame in Hollywood could be cast well with beautiful drive-in starlet Candice Rialson, most memorable perhaps for her vaginal interpretation of the US national anthem in Chatterbox the following year. We watch a swift introduction of her arrival and adventures with criminals and agents, until she meets the contact to place her in the business - Walter Paisley (direct A Bucket of Blood reference there) played by Dick Miller. Of course he couldn't introduce her to a major studio, Candy is sent to Miracle Pictures. - "If it's a good movie, it's a miracle." - where Director Erich Von Leppe, has a penchant for impersonating Alfred Hitchcock and Roger Corman. He is brilliantly embodied by Paul Bartel, a significant genre director in real life. You'll recognize other exploitation film names like Jonathan Kaplan and Charles B. Griffith as well. 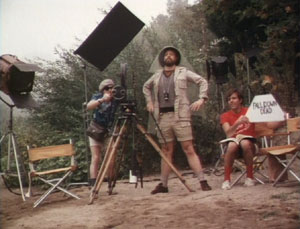 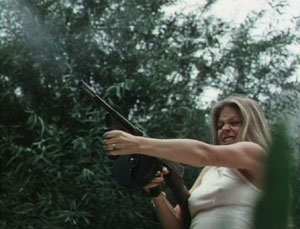 Pepped up with lots of nudity, the crew is working on different locations and pictures until a killer is going to sabotage them. You're going to see girls with guns shooting from American hills and soldiers in the Philippines being hit. You'll also see Commander Cody and his Lost Planet Airmen performing a song about truckin', just because they would have free video footage and promotion in return for their music. One of the highlights for sure is rare outtake footage of mutant eroticism shot by a young Francis Ford Coppola for Roger Corman. You'll find it in the drive-in scene during an intermission sequence between popcorn and green meatballs commercials. All the tiny details like this and the campy fun is what has pleased genre nerds to this day. Film schools might be studying it as well. Although Hollywood Boulevard's profits broke even by an export sale to Spain, witnesses report it has only played two days on 42nd Street and it may not have been a major success nor could it be termed a good movie. But then, who really cares about that?