After a great Grab-Your-Attention shot of a screaming victim falling dead to a freeze frame of the film's title, along comes a catchy country western tune as the credits play out. The lyrics provide for the motivating killings: "But there's daaaaanger on the road/Danger on the road/When you go thumbing a ride/You can never tell/When you hitchhike to Hell/Travelling the road of life/Is lonesome at best/And you need all the loving/You can get/So don't leave your family/The things who care for you/Think twice, girl, before you go/And try not to forget". 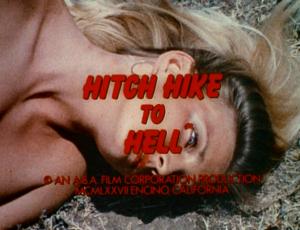 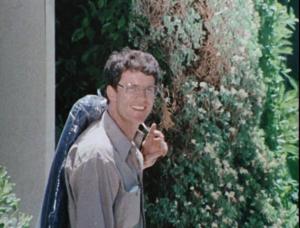 Welcome to Crescent City, California. Home of the largest population of young highway hitchhikers (seriously, even the local police captain says so!) On these roads, a nerdy laundry deliveryman named "Howie" (Robert Gribbin) often picks up the hitchhikers and takes them to their destination. It's always a safe drive with Howie....Just as long as you don't say that you're a runaway who hates your mother! You see, Howie has always loved his mom. Unlike his sister who hated his mother and ran away--Never to be seen again. So whenever Howie hears a hitchhiker say that they ran away because they hated their home, some brain-detonating wickedness erupts into Howie's mind as he rapes and strangles the hitchhikers to death. The killings leave a blackout effect on Howie and he never realizes what he's done. Only an occasional painful, subliminal image of his crime shows up randomly. Causing a headache to the poor, warped psycho afterwards. Someone has to put an end to this madness. Enter Police Captain Shaw (Russell Johnson, who we all know as The Professor on GILLIGAN'S ISLAND) who will try to save the day. 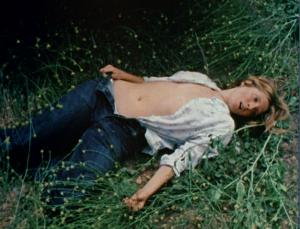 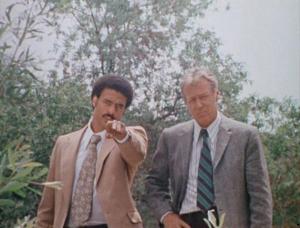 This one was quite a surprise for me. Sure, you can giggle at some of the laughably bad acting and dialogue that these type of films are known for packing. But not only is there a good, overall pace on Hitch Hike To Hell, what I mostly admired was that this is one of those rare exploitation flicks where just about every character you see in the movie doesn't feel wasted. All the supporting characters get their chance to shine which includes Howie's Mom, Howie's boss, Shaw's lieutenant partner, Shaw's lieutenant partner's wife, and of course, the hitchhikers. The last two hitchhiker victims especially cause sadness and disbelief to the audience. Which is proof that this movie knows how to hit certain marks. Lastly, this movie seemed to have an erratic releasing pattern. Reportedly being filmed in the late 60's. Receiving a release in 1970. And a re-release in 1977. The fact that this movie was given multiple chances to be seen is a testament that Hitch Hike To Hell is certainly worth a viewing.