With Hi-Riders, Writer/Director Greydon Clark basically remade The Wild One but with muscle cars (actually there are bikes AND cars in it). Two teenagers Mark (Darby Hinton) and his auto-saavy girlfriend Lynn (Diane Peterson) come across one of the brothers in the Hi-Riders car gang, hold a race, and Mark wins. Instead of the gang leader TJ (William Beaudine) sticking up for the loser Billy (the husky wild n crazy, beer swigging member) he takes sides with Mark. This is where Greydon Clark decided to not have his gang be the typical two faced thugs you'd see in most biker films, but instead have The HRs be an honorable, likeable gang that audiences would want to hang out with. I think that was a great choice!

Since things are cool, Mark and Lynn decide to tag along with the HRs and everyone becomes fast friends. Its one big car drivin' party with people drinking and playing car chicken. Theres several great rock n' roll songs from the era in the film (which is alot better than generic background muzak). When "Rock On" by David Essex started playing, I knew I was in good hands. The Hi-Riders arrive in a small town & first thing they do is hit the local bar called "The Reservoir". They start playing pool, drinkin beers and acting nuts (what else?). The grouchy bartender "Red" is played by Neville Brand. The two local cops are played by Ralph Meeker and Mel Ferrer. This is also where we meet the sexy/cute bargirl Angie who looks like a mix of Kelly McGillis and Ingrid Bergman. TJ really digs her. Soon after, a local snobby rich kid shows up complete with silver racing jacket, and challenges Billy to a race. He accepts. Everything is ridin high and easy....until both cars get into an accident, crash and explode. The gang all watch on in shock....but strangely noone runs to try to save Billy or the rich kid. Instead of a sullen follow up scene, TJ and Co toast Billy and the locals and go right back to partying HR style. 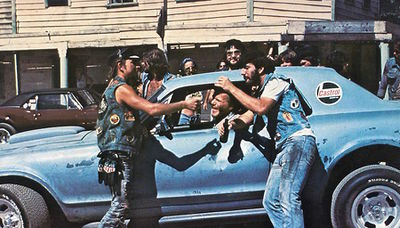 Sadly, the rich kid's dad (Stephen McNally) shows up and breaks up the post-death party then hires the hick locals to get revenge on the gang and all hell breaks loose! Shotguns blaze, bellbottoms flare, cars & trucks crash, hoods get ridden on. Not to leave anything out even with impending danger at hand, theres a love making interlude set by a lake at night....AND a joyful skinny dipping scene in the rock quarry the next day! Greydon Clark sure wasnt lazy when he made this film!! It should be noted, the main stunt coordinator on the film Vic Rivers died in a truck stunt gone wrong. This sequence was actually kept in the film at Rivers' friends and families request. The film is also dedicated to his memory. Hi-Riders was shot in large part on the Paramount Ranch north of LA with the sunbaked spacious hills/fields and also on the Fox Ranch. This was an awesome film. To top it all off, it contains what I'd say is one of the best endings in 70s exploitation cinema! Recommended!