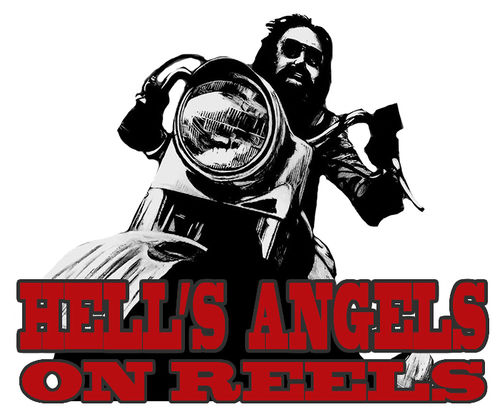 The roots of the biker genre began in 1954 with The Wild One, starring Marlon Brando. This was a Hollywood production and was a major hit among audiences. It introduced us to the bike riding rebel, which appealed so much to the alienated youth of the 1950's. Years later in the late 1960s, Biker films were made incredibly popular by low budget directors like Roger Corman who pulled in drive in and grindhouse audiences with his own biker classic starring Peter Fonda and Nancy Sinatra called The Wild Angels (1966). Corman saw biker films as modern day westerns and with the decline of American Western films in the late 60s, Corman capitalized on the idea. The bikes took the place of horses and the gangs were the new Western outlaws on wheels. The films were very popular with the younger generation who hooted and hollered at drive ins and grindhouses while the onscreen biker gangs got into fights and went on wild adventures. Biker films had several common themes, usually dealing with Revenge or showed the biker gangs trying to live on their own terms in the face of oppression from "The Man", foreshadowing themes we would see in the 70s Blaxploitation genre. This was the 1960s and civil liberties across all cultural lines was a big subject. You can also see this theme explored even more in the cult classic Easy Rider (1969).

Although 99 % of the Biker films were made up of male anti-heroes, there were also stories involving women as the main characters. In Barbara Peeters' 1971 Biker film Bury Me An Angel there is a twist put on the usual "bikers out for blood" storyline. In the film, actress Dixie Peabody's tall, sexy blonde character "Dag" is placed in the role of the tough hero, while her followers are male. There was also a biker film that crossed into the War-Men on a Mission subgenre: Jack Starrett's 1970 cult classic The Losers, in which a group of bikers are sent to rescue a captured official in Vietnam.

Many of the biker films starred up and coming actors who went on to become big stars like Bruce Dern (The Cycle Savages), Jack Nicholson (Hells Angels on Wheels) Dennis Hopper (The Glory Stompers) and Gary Busey (Angels Hard As They Come). You can also see pop stars like Top 40 Radio DJ Casey Kasem (The Glory Stompers) and Football legend Joe Namath (C.C. & Company) in several Biker films.

Many legends of the Grindhouse contributed to the scene in unique ways. Herschell Gordon Lewis's She Devils on Wheels (1968) used a real female biker club that fit in well with Lewis' raw style which featured many players who were in his films of 1967 and '68; Al Adamson's Satan's Sadists (1969) brought in legendary cinematographer Gary Graver to set new standards in low budget film making and introduced the world to a Late 60's era Russ Tamblyn that must have shocked fans of West Side Story as the legendary sadistic gang leader; Lee Frost brought his legendary talents to the scene with Chrome and Hot Leather in 1971; Lee Madden created a legend with Hells Angels 69 alone featuring the real deal from Oakland as well as Conny Van Dyke. There were plenty of pretenders to the throne from the pre-Easy Rider era to keep the Drive Ins busy including William Grefe's Wild Rebels from 1967 starring singer Steve Alaimo, The Hellcats and Angels From Hell from 1968, and the K Gordon Murray distributed Big Enough and Old Enough from 1969 - in fact it has been reported that Angels From Hell actually premiered at a Drive In in Wichita, Kansas, an event that must have made the local paper; With Jack Starrett's 1969 Run Angel Run having a Dramatic edge to go along with the Action as well as classic cinematography, however, things were about to slightly change in this scene to keep things interesting.

The best Biker films always had classic soundtracks or at least great themes. The Wild Angels set the standards with Davie Allan's fuzz tone driven score that included two hit singles ("Blues Theme" and "Theme From The Wild Angels") and was issued two volumes, She Devils on Wheels had the Garage Punk classic "Get Off the Road," Satan's Sadists had Harley Hatcher's classic theme song, and Werewolves on Wheels had one of the last great scores for the genre. Even lesser films like The Hellcats had songs that made sure the viewer remembered them while films like Angels From Hell used lesser bands from the era including The Peanut Butter Conspiracy to give some wanna be hip value to the show, but some films had very surprising songs featuring stars like Tammy Wynette (Run Angel Run's opening song) that were possibly unexpected highlights in Exploitation soundtrack history.

An Exploitation genre is not a complete success until it hits the Adult film market, and the Biker Film has made some marks in that scene. Sisters in Leather (1969) used the Biker Mama angle, while Lee Frost (as Elov Peterssons) released the 1970 film Ride Hard, Ride Wild that used the classic "Made in Denmark" line to sell its tickets for what in reality was one of the films for Phoenix International now best known for Frost's Zero In and Scream. Unit 10 of Alice In Acidland fame distributed yet another allegedly "Made In Europe" (This time Sweden) film called The Bride and the Beasts, which looks like it blended The Biker and Roughie styles for the Adult audience in 1969. in a tale of a gang crashing into bridal shower.

After Easy Rider premiered in the Summer of 1969, there were some challenges for the genre, including trying to add more of a story driven style to the Action driven genre. While the characteristics were still strong Drive In fare, including the must-have riding sequences, films like Angels Die Hard (1970) and The Black Angels (1970, noted for having one of the better high energy chase scenes in the beginning) had some success in adding more serious elements, but sadly when a film starring Joe Namath came around in Late 1970 (C.C. & Company), the end was getting near. Interesting and humorous twists in the genre like The Pink Angels were attempts to keep the style going, but the most memorable films of the final days of the Biker Film were based in the Occult with Werewolves on Wheels from 1971 and the British Cult favorite Psychomania, a very fitting end to the genre from 1973.

The Biker Film was a strong staple of the Drive In circuit, as well as many of the Grindhouses that knew there was an audience for them, but it faded away very fast when Exploitation had new topics to move into during the changing culture of The 70's. Still, thanks to repeated showing of classics like The Wild Angels on Late Shows through The 70's and 80's, there was a ready cult for these films once the Video Age came around which kept the scene alive. The best of the Biker Films remain solid entertainment, with great songs to make the ride a great one, and are an contribution to American Grindhouse culture.