Helga: She Wolf of Spilberg/Review

< Helga: She Wolf of Spilberg

Review of Helga: She Wolf of Spilberg 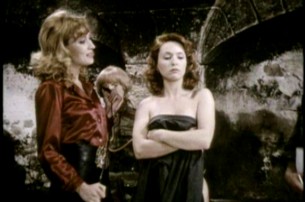 Following the box office success of notorious Sieg Heil sickie Ilsa: She Wolf of The S.S. French production company Eurocine cranked out a whole bunch of Nazi exploitation flicks most of which test the patience of all but the most insomnia stricken grindhouse ghoul. Although it rips off the title of Don Edmond’s sleazy SS opus, and shares cast & crew with many of Eurocine’s Third Reich pot-boilers, ‘Helga, She Wolf Of Spilberg’ doesn’t actually feature any Nazis and in many respects has more in common with Jess Franco’s unofficial sequel Ilsa: The Wicked Warden.

The plot takes place in some strangely indeterminate Eastern European/South American republic where the fascist President and his government are at war against a rebel uprising led by a chap called Ludwig Vogel. Sick of her belly-aching about the state of the nation the President assigns uber-bitch side-kick Helga a ‘special’ project; she’s to take charge of a castle full of female political prisoners. Confused? Don’t worry; ladies get naked soon.

The inmates of Spilberg are the expected collection of badly dubbed & curly-permed ladies of leisure their manual labour frequently interrupted by trips to a local farm where a sleazy character called Doc (Is he a Doctor? He doesn’t have a stethoscope) has his wicked way with them after bribing the prison guards with home brewed hooch. After testing the freshness of the T n’ A with a squeeze and a slap he drags one girl off to his barn and sets about molesting her. Helga watches the assault from the hayloft in an obvious state of arousal while the camera lingers on Doc’s fat belly and sweaty bald spot.

Back at the castle one of Doc’s victims starts a food fight in the mess hall and is promptly delivered to the dungeon where she’s stripped and whipped. And oh boy, this ain’t no playfully fake S & M, this chick gets a genuine thrashing. Eye-watering stuff.

The daughter of rebel leader Ludwig is delivered into Helga’s clutches and is soon making a trip to the sex farm. Elizabeth Vogel is a tough cookie; she defies both Doc’s and Helga’s attempts at seduction but her wilfulness is only rewarded with increasing torture and abuse. Only the kindness of an undercover associate of her father and a new found friend with a daring plan for escape give her any hope of ever being free of Helga’s hell hole.

As implied earlier fans of Jess Franco’s ultra-grubby Women-In-Prison films will feel right at home in Schloss Spilberg. Is that a recommendation? You decide. When a movie has a budget as small as this one does nudity is about all you can afford to fill it with however in spite of the abundance of recycled footage, music & cast members that one comes to expect from Eurocine, this is in fact one of Daniel Lasouer’s better looking productions. There are some attractive outdoor locations and a handful of well edited sequences; in particular the scene where Helga takes a bath and one of the prisoners helps to wash her boobs stands out as an artistic highlight.

Malisa Longo is strict & sexy as Helga but let’s be honest; she ain’t no Dyanne Thorne. She can however be seen giving a genuinely Nazi performance in another Eurocine production from 1977, the more well known but generally inferior, Fraulein Kitty.