Michael (Joseph Kaufmann) is a cartoonist living in New York City. His mother is Jewish and his father is Italian and the two of them are constantly fighting. To escape his family life, Michael plays pinball at a local arcade and fashions cartoons based on the odd characters he meets in his daily journeys. His cartoons are laced with sex and violence and accurately represent the ideals of the life that he has been subject to. Only his love for an outspoken African-American woman named Carol (Beverly Hope Atkinson) keeps him going in this existence he has been born into.

Ralph Bakshi's first film after the smash cult success of his X-rated cartoon Fritz the Cat (based on the comic book by underground comic book artist Robert Crumb) is a continuation of the rampant sexual situations and graphic violence that marked his first theatrical foray into animation. Besides filling the film with stuff that make the film required viewing on college campuses, Bakshi also manages to give us a story that is infused with elements of his own life and fairly accurate representations of life as it was seen back when the film was made. 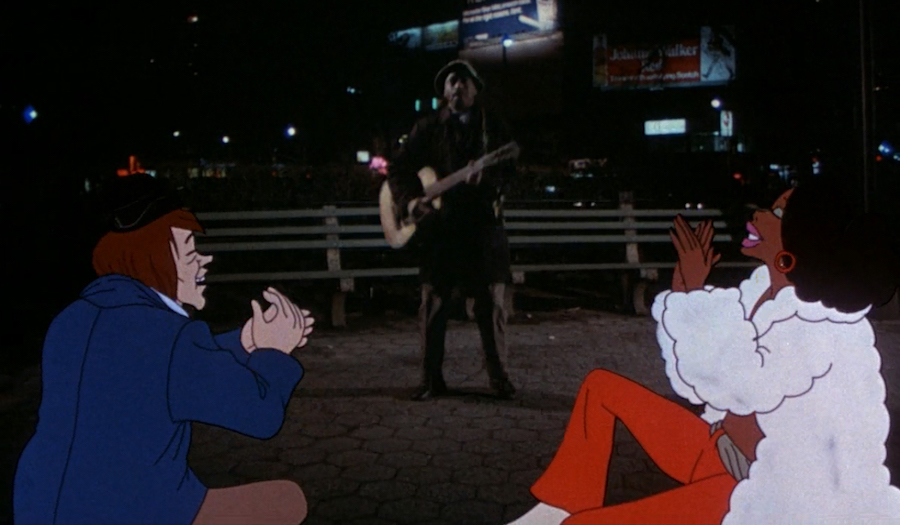 Bakshi makes an interesting choice to start and end the film with live-action scenes featuring Michael playing pinball (in the beginning of the film) and then finally chasing down the living incarnate of his love Carol (at the end of the film). After seeing Michael's animated representation of his world (which is insanely violent and racist) these live-action scenes are particularly jarring, as they contain none of the elements that made up the previous 50 minutes of the film and are actually quite sweet in their presentation. It's a wonderful transition, and one that Bakshi handles perfectly.

Bakshi also makes wonderful use of real life scenery to add a surreal backdrop to his animation. Many of the shots of the animated characters driving vehicles are shown with live footage of roads and storefronts behind or beside them and some scenes even feature characters walking amongst live-action backdrops (which was reversed in Bakshiís box-office failure Cool World to feature live-action actors placed in animated backdrops). This gives the film a sort of strange quasi-realism that adds to its atmosphere.

Heavy Traffic has been released on DVD through MGM Home Entertainment. The film is presented in the full frame format and no cropping seems to be evident (despite the film's original aspect ratio of 1.66:1). The film's audio is only in Dolby mono, but Bakshi uses classic songs like "Twist and Shout" and "Mabelline" to good effect in the film (songs which weren't recorded in stereo to begin with). Included on the disc is the film's original theatrical trailer.