< Hatchet For The Honeymoon

John Harrington (Stephen Forsyth, who looks an awful lot like Viggo Mortenson) is married to an evil woman, Mildred (Dagmar Lassander), who refuses to divorce him because she has a stake in the wedding gown business he inherited from his deceased mother. What Mildred doesn't know is that her husband is evil in his own right. John has taken to murdering brides on their wedding nights, because every murder unlocks a piece of a mental puzzle that has clouded his mind since childhood.

When Mildred dupes John into believing she has gone out of town for a week just to catch him cheating, John decides he's had enough. Brandishing the same cleaver he murdered his previous victims with (and wearing a bridal veil), John brutally murders his wife and buries her in the garden behind the house. Unfortunately for John though, Mildred has taken the vow of "till death do us part" seriously and her spirit won't rest until she has driven John completely mad.

Hatchet for the Honeymoon is a classic bit of creepiness from Italy's premier director Mario Bava. Bava knew how to work a camera (as he acted as director of photography on almost every film he made) and in this film he uses it to great effect. Never before have close-ups of eyes seemed so eerie.

The story starts off a little slow (and begins with a killing on a train, a scene echoed years later in George A. Romero's Martin), but once John kills his wife things begin to pick up. Part of Mildred's new found ghostly torture of John is that everyone else can see and hear her, but he can't. This makes things a bit strange for John as people talk to his wife and even fill her drink orders even though John knows he has killed and buried her. In one effectively creepy scene, Mildred finally appears to her husband, but only to explain that she will never leave his side and that he will still be the only one who cannot see and hear her. The whole premise is chilling and Bava wrings every drop of unease that he can from the script. 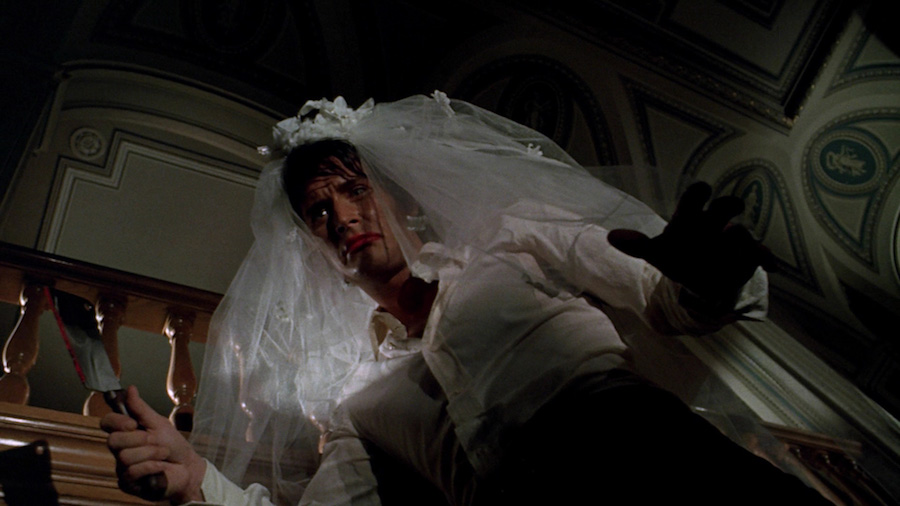 The only other minor problem I have with the film (other than the slow beginning) is the fact that a hatchet is never used in the film. John's chief weapon of choice is his shiny meat cleaver. He never picks up any other weapon but that one and it leads me to wonder exactly where the title came from. It could have been in the original screenplay written by Santiago Moncada, considering Bava himself re-wrote the script to make it more personal, but this is a minor quibble and did not detract any from my enjoyment of the film.

NOTE: Bava fans will take delight in the sequence where John kills his wife. A police detective outside hears John's wife screaming and begins banging on the door. Making sure that his wife is completely dead, John answers the door and consoles the detective's fear by showing them the horror movie playing on the TV in the next room. The TV just so happens to be showing another Bava classic, Black Sabbath!

As part of their excellent ongoing Mario Bava Collection, Image Entertainment has released Hatchet for the Honeymoon on DVD. The film is letterboxed at approximately 1.66:1 and the print looks decent, except for a few scratches here and there during the beginning (mostly due to the source print used). The sound during the beginning of the film is slightly muffled as well. Despite those two minor things, Image has done fans of Bava and this film a great service by issuing the best looking version of the film to date. Also included on the disc are a Bava biography and extensive liner notes by film historian and Video Watchdog editor/contributor Tim Lucas. A filmography of some of Bava's work is also on the disc, and rounding out the special features are a handful of photos and poster art clips.