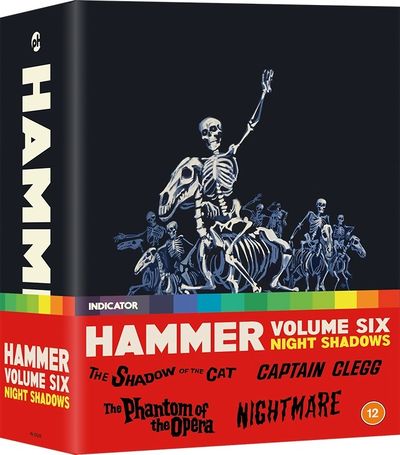 The Shadow of the Cat (John Gilling, 1961): A house cat sees her mistress murdered by two servants under orders from her husband , and becomes ferociously bent on revenge.

Captain Clegg (Peter Graham Scott, 1962): When a captain arrives on an English coastal town to investigate reports of smuggling, he ends up with much more to deal with, including marsh phantoms and a suspicious vicar.

The Phantom of the Opera (Terence Fisher, 1962): Composer Lord Ambrose D'Arcy (Michael Gough) and his backer, Harry Hunter (Edward De Souza), struggle to find a replacement for the female lead in their new opera after she quits in the wake of a gruesome murder. When a new prospect, the nubile Christine Charles (Heather Sears), disappears, Harry cautiously investigates. Meanwhile, a mysterious masked man (Herbert Lom) who is eerily familiar with the opera holds Christine captive and offers to groom her to play the part.

Nightmare (Freddie Francis, 1964): Janet is a young student at a private school. Her nights are troubled by horrible dreams in which she sees her mother, who is in fact locked in a psychiatric hospital, haunting her. Expelled because of her persistent nightmares, Janet is sent home where the nightmares continue.