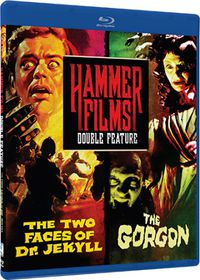 The Two Faces of Dr. Jekyll: Absorbed in research directed towards freeing the two natures of man, Dr. Jekyll degenerates in to Mr. Hyde, a vengeful maniac. While Hyde wants revenge against a gambler whom his wife is in love with, Dr. Jekyll, takes steps to do away with his evil self. Starring Starring: Paul Massie, Dawn Addams, Christopher Lee, David Kossoff, Norma Marla, and Francis De Wolff.

The Gorgon: In a rural village, a series of murders have been committed where each victim was turned into stone. A local professor investigates and finds an evil Gorgon haunting a nearby castle and in search of more victims. Starring Christopher Lee, Peter Cushing, Richard Pasco, Barbara Shelley, Michael Goddliffe, and Patrick Troughton. 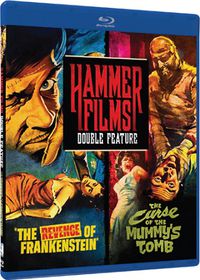 The Revenge of Frankenstein: Peter Cushing reprises his famous role as Baron Victor Frankenstein in this horror classic. Rescued from the guillotine by his devoted crippled assistant Fritz, the Baron relocates and becomes Dr. Stein. Under the guise of charity work, he continues his gruesome experiments, this time transplanting Fritz's brain into his latest creation: a normal, healthy body. Starring Peter Cushing, Eunice Gayson, Francis Matthews, and Michael Gwynn.

The Curse of the Mummy's Tomb: An American showman and financier disrupts the coffin of a mummified pharoah and finds it empty. The mummy has escaped to fulfill the dreadful prophesy and exact a violent and bloody revenge on all those who defiled his final resting place. Starring Terence Morgan, Ronald Howard, Fred Clark, Jeanne Roland, George Pastell, and Jack Gwillim. (Mill Creek Entertainment)