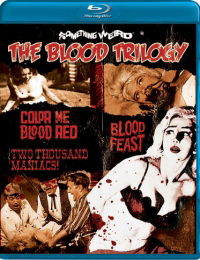 Then the Two Thousand Maniacs of a small Southern town celebrate the 100th anniversary of the Civil War by forcing a handful of Northerners to serve as "guests" in their macabre, blood-crazed fun and games.

And when his girlfriend, Gigi, cuts her finger on a frame, maniacal artist Adam Sorg discovers a new shade of crimson that will make his artwork so special—human blood—in the shocktacular Color Me Blood Red