Ban 1 Productions gives Grindhouse/cult film fans a real treat with this enjoyable (and very extensive) exploitation film trailer compilation. The majority of the trailers included are even more rare than the ones found on Synapse Films' 42nd Street Forever discs. Genres covered include: American and Euro-Horror, Crime films, Blaxploitation, Sexploitation, Mondo films, Italian gore, Biker films and Eco-Terror classics. One of the discs best features is the running audio commentary by Ban 1 producer Jeff Dolniak and Cult film journalist David Hayes. What you get is not so much an informative scholarly coverage, but something more like "MST3K Goes To The Grindhouse". These guys are very funny and I spat out my drink more than twice when I heard some of the jokes they made about the films. I think part of what makes Grindhouse films so entertaining is that they don't play by the rules and when you watch them you can both enjoy them for their truly rebellious style and rather unique cinematic qualities. Its all about that special kind of exciting, late night entertainment you'd find at the inner city Grindhouses back in the day and thats exactly what Grindhouse Universe is getting across to viewers. A perfect DVD to sit back and drink some cold beers with!! This disc is certainly a must own for Grindhouse film fans! 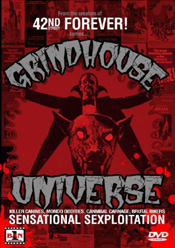