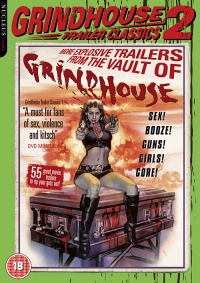 "Hot on the heels of the successful - and critically acclaimed - Grindhouse Trailer Classics vol 1, Nucleus Films have been busy polluting their minds watching a mind-twisting plethora of movie trailer trash in preparation for this much requested follow up volume of Grindhouse trailers, which promises to be just as audacious as the first volume – and then some!

Be prepared to venture on a second two-hour trip into the demented minds of the folks at Nucleus Films, and have your brain knocked out of gear by this stunning assault on the senses of demented and deranged movie previews, the likes of which you never dreamed of!

GRINDHOUSE TRAILER CLASSICS 2 brings you a hand-picked collection of mind-blowing trailers for the 1960s and 1970s cult movies that have inspired and informed the works of a whole generation of contemporary directors including the likes of Quentin Tarantino (Death Proof), Robert Rodriguez (Planet Terror), Eli Roth (Hostel) and Rob Zombie (The Devil’s Rejects) – films such as The Black Gestapo, 10 Violent Women, The Bodyguard, The Depraved, Bloody Pit of Horror, The Pink Angels, Foxy Brown and many, many more.

So if it’s a smorgasbord of cinematic sex, gore and violence you’re looking for to satisfy your hunger for fun, shocks and entertainment, look no further than GRINDHOUSE TRAILER CLASSICS 2, the other DVD you’ll need to continue your own Grindhouse partying!" (Nucleus Films)