Grindhouse: The Forbidden World of Adults Only Cinema 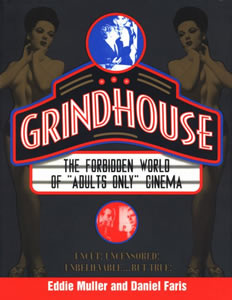 From the 1920s through the 1970s, America's most fearless entrepreneurs created thousands of "adults only" features— exploitation films that promised "Sinsational!" treatments of the day's hottest topics. These films played red light district theaters and roadshows for almost half a century, until hardcore pornography and the advent of VCRs rang the death knell for this distinctive form of "art." Grindhouse traces the ribald history of these "adults only" films, down Poverty Row through the Scandinavian Invasion, past the nudie-cuites, and into the swinging days of free love. Along the way we get the most sordid, sleazy, and shameless cinema imaginable-Vice Rackets! Narcotics! Nazis! Nudists! Cults! Wrestling Women! And So Much More Than You Can Ever Imagine! Adding yet more color to this history of blue movies are revealing portraits of the artists and auteurs behind the films, including Dwain Esper, Kroger Babb, Russ Meyer, Doris Wishman, David F. Friedman, Radley Metzger, and the Mitchell Brothers. Grindhouse was named one of the 25 best art books of 1997 by legendary Village Voice art critic Guy Trebay. (EddieMuller.com)