Traditionally, slasher cinema is one sub-genre that operates on a strict formula. Take a(n) location/event, throw in some rowdy teens, pick a killer, pinpoint a motive and set the antagonist loose on the helpless masses. From this template, filmmakers can either create classic moments that brim with character and atmosphere (i.e. Alice, Sweet Alice's eerie religious setting; Sleepaway Camp's smart-mouthed teens and psychological trappings) or go through the motions and make a lifeless film lacking characters to root for or death scenes to anticipate.

Unfortunately, Graduation Day belongs to the latter, being that it is a film with absolutely no personality, stilted and passive murder scenes, subplots that lead to little or nothing, and a dark void where a deep well of suspense should exist. While watching it, I rarely reacted or even feigned concern about the lives of the characters or the progression of the plot. My only reactions stemmed from extreme disgust or embarrassment and the atrocious live rock performance by Felony did nothing to help matters.

The film is also loaded with annoying quick jumps and cuts that are intended to be some kind of stylish expression (MTV would eventually push such editing tactics to their ne plus ultra), but actually distract from the story and gave me mild tension headaches.

Despite this flick’s already detailed failings, its plot could have actually worked if placed in capable hands. After a teen track star suffers a blood clot during a crucial meet, a black-gloved killer stalks her teammates, seeking vengeance for her premature death. Could the slasher be the success crazed track coach, her Marine sister or the hunky boyfriend that planned on marrying her after graduation? 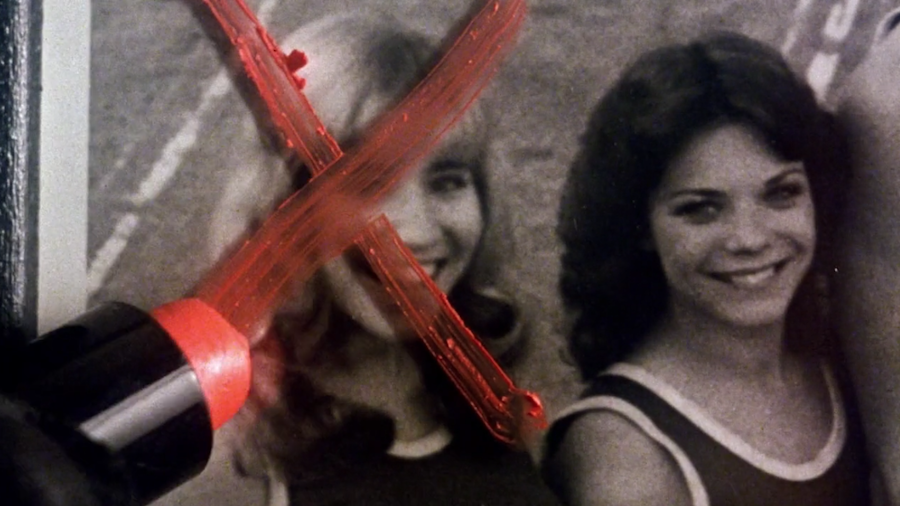 Even though the premise looks good on paper, don’t get your hopes up for the unmasking of the aforementioned psycho. It’s obvious from the get-go who’s behind the slayings and scenes where the masked killer’s figure is shown (he/she’s wearing fencing gear and brandishing a foil) match the body type of one of the main characters specifically.

As for the death scenes, we get a slit throat (off-screen), three foil stabbings (one while attached to a football), a decapitation, and impalement by bed of spikes. Most are pretty weak, but the chest pass with a blade-equipped football is a welcome surprise if not quite enough to keep the raft afloat. The murder sequences all seem to take place in the same wooded forest area, leaving the film without any interesting settings or looming atmosphere. It's as if the crew could only film at one location. Why not try a classroom murder or roller rink death?

Despite a brief appearance by future Wheel of Fortune star, Vanna White, and the mind-numbing Felony performance, this flick is bland and cliché; full of blown scare opportunities and shamefully underwritten characters.