Giallo: Going Back To Basics

What does one think of when the term Giallo is used? Many fans usually start talking about crazed, black gloved killers brandishing an assortment of knives going after a series of scantily-clad, screaming women and hacking away at them. While this has certainly become the prototype and the common thematic trope of the Giallo genre, this is not what the genre was originally supposed to be. 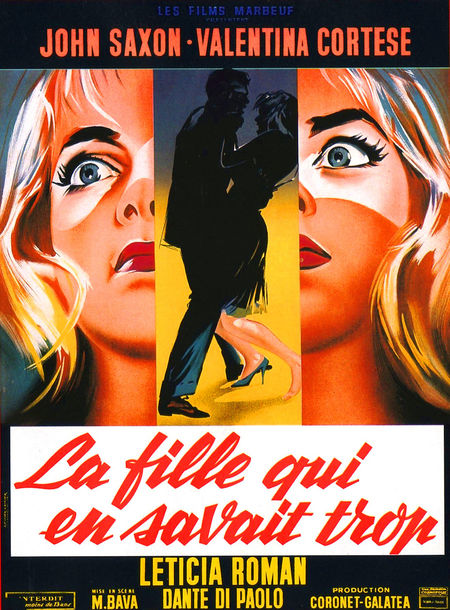 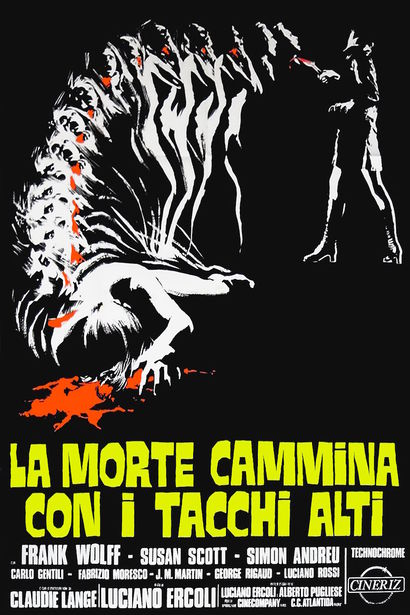 When Mario Bava invented the Giallo in 1963 with La Ragazza Che Sapeva Troppo (The Girl Who Knew Too Much), he initially conceived a Mystery-Thriller style film with more emphasis on atmosphere, mood, music, and lighting. By focusing a little more on the overall look of the film and how the score was used for certain scenes, Bava took the mystery out of the boudoirs and the upper/middle class settings and placed the average Joe or Jane protagonist into a cycle of mayhem and uncertainty with an intense foreboding. The whole point of the initial film was for the main character Nora, along with her boyfriend Dr. Marcello, to figure out who was behind a series of murders that occurred over the span of a couple years with Nora witnessing the killer's most recent crime. Looking at these factors, it became clear that the Gialli were, on the onset, meant to be the Italian take on Thrillers inspired by Agatha Christie stories, but with a darker touch. Other films like El Ojo del Huracan (La Volpe dalla Coda di Velluto/Lusty Lovers/In the Eye of the Hurricane/The Fox with the Velvet Tail), La Morte Cammina con I Tacchi Alti (Death Walks On High Heels), Una sull'Altra (One On Top Of The Other/Perversion Story), La Morte Accarezza a Mezzanotte (Death Walks At Midnight), and Paranoia (A Quiet Place To Kill), to name a few, also followed this pattern of ordinary people thrust into situations where they had to, sometimes along with the police, figure out who was trying to do them harm, and if the same persons were responsible for other crimes as well. Part of this cycle of early efforts came about the result of the success of the Edgar Wallace Krimi films in Germany of the late 1950's to the early 1970's, which also dealt with ingenious crimes, and the detectives and possible targets that must discover the truth. 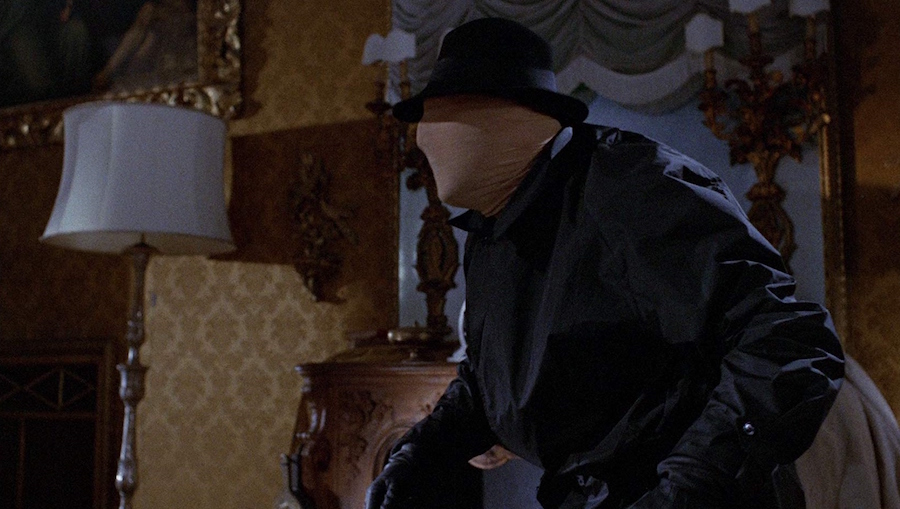 The whole notion of the killer being a homicidal maniac in the vein of slasher icons Michael Myers, Jason Voorhees, and Leatherface didn't really come about until the making of I Corpi Presentano di Violenza Carnale (The Bodies Presented Traces Carnal Violence/Torso), which ironically preceded all those successes by about five years. Now while littered with red-herrings, a popular trope of the Mystery-Thriller, the killer being a sex-maniac with a psychological need to kill would forever change the landscape of the genre and how people viewed it. Bava himself contributed to this new light in 1964 with Sette Donne per un Assassino (Six Women for the Murderer/Blood and Black Lace), though his ideas were more about upping the intensity and atmosphere of the film to the point it felt like Horror. Now while these experiments proved fascinating and visionary, they also took the Giallo into a direction that it didn't necessarily need to go into. The same can be said for the Edgar Wallace Krimi's in Germany. All of a sudden, the films that generally revolved around solving murders and trying to figure out how each is connected, are now being associated with Horror films and deranged lunatics, something which when each film is looked at, contain little or nothing at all within those realms. Killers looking to conceal their activities or avenge past injustices are depicted as complete psychopaths with no conscience, again which are completely untrue when looking over the films. 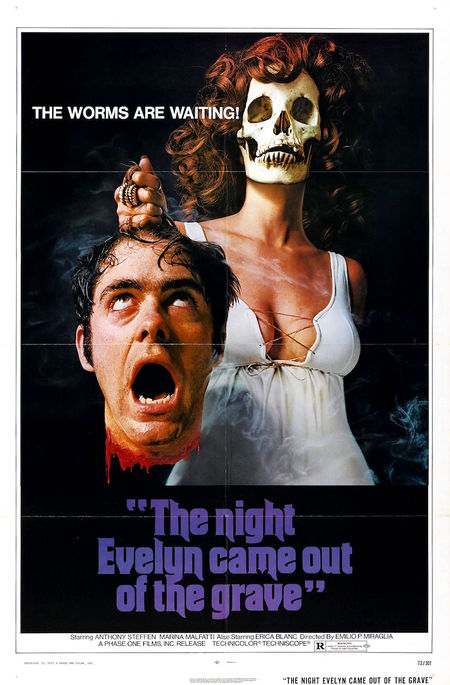 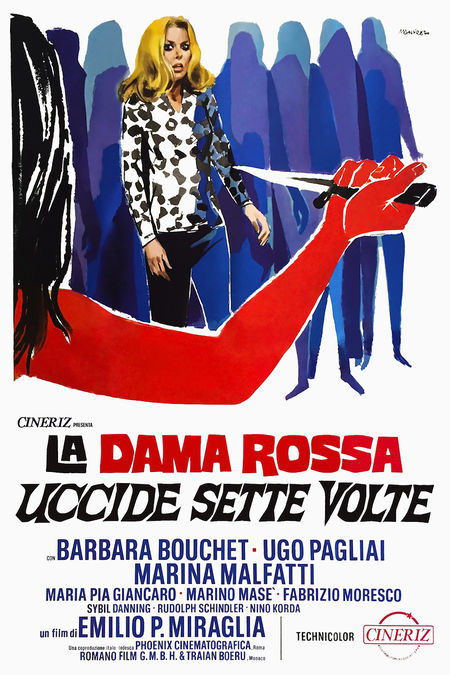 What added to this conundrum for the Giallo was two early 1970's films by Emilio Miraglia: La Notte Che Evelyn Usci dalla Tomba (The Night Evelyn Came Out of The Grave) and La Dama Rossa Uccide Sette Volte (The Red Queen Kills 7 Times). These films took the Giallo into the realm of the Supernatural with characters returning from the dead, either as apparitions or reincarnated, to seek vengeance for past wrongs. Whether Miraglia was influenced by Tod Browning's London After Midnight and its equally good, though not as cleverly done remake Mark of the Vampire, two films in which local superstitions involving vampires are used to trick a murderer into revealing how he committed his crime is uncertain, but it's clear the basis of police and witnesses using childhood fears in urban legends to coerce confessions out of suspected killers is there. The Krimi films in Germany went through a similar uproot, though for them it was more related to the Universal Monster Films rather than Slashers. These Supernatural inclusions further spun the Giallo into the realm of Horror, its roots in the Mystery film slowly, but steadily, becoming blurred to the point that fans truly had to really look hard at what constituted as pure Giallo, or Horror with Giallo elements. By the mid 1970's people had to really do their homework on what was a Mystery Thriller, and what was Horror with a crime to crack.

To fully flush out what are the true Gialli as Bava initially intended back in 1963, and what are Italian style slasher films, we must look at what defines each.

Mystery Thriller: A) Crimes being solved, discovering the link all the crimes have in common, if past indiscretions have anything to with what's happening now. B) The Killer is often trying to cover a recent indiscretion, has a form of mania, trying to prevent the discovery of their involvement in a past indiscretion, protecting someone from going to prison, preventing a scandal, settling a score with an enemy. C) Crimes are investigated by the police, or an ordinary person who is sometimes a suspect trying to clear themselves. D) Little to Moderate depictions of murder and violence

Slasher Horror: A) An escaped mental patient, or psychologically unhinged person going on a violent killing spree, someone having to stop the maniac before they kill again. B) The Killer is often acting on a psychological impulse usually brought about by a traumatizing incident, Killer's targets are usually people symbolically representing a past trauma, usually involving physical, emotional, mental, and even sexual abuse, the targets are often innocent and are only stalked by the Killer because they accidentally crossed their path. C) Similar profile, sometimes a person from the Killer's past is the only one who can stop them. D) High to Extreme depictions of murder and violence

Now many of these elements can be mixed in together and not wield similar results, as a killer can be psychologically unhinged, but still possess enough sanity in their mania. Some Mystery Thrillers can even use Supernatural ploys to help flush out the guilty party, but it must be remembered that the film is not a Horror one, but only as a means to solve a crime. The guidelines are mainly for the general consensus into what constitutes as what.

The Black Gloved Killer motif wasn't meant to signify a diabolical, mentally unhinged psychopath. In the Mystery stories of Agatha Christie, Edgar Wallace, and others, killers wearing black gloves and their face covered was to keep the audience from discovering too early the identity of the culprit, so the final reveal at the end would pack an extra good punch of surprise. When the popularity of serial killers rose in the late 1970's, early 1980's with such film franchises as Halloween, Friday The 13th, and A Nightmare on Elm Street, every killer who kept his identity a secret was automatically labeled a serial killer or Slasher. Again, this was not the original intention within the Giallo. In a true Giallo, most of the killers were clever criminals who had no problems resorting to murder to accomplish their goals, sometimes also having a mania which drove them to act, but in a sane, well thought out matter.

Black gloves and razor: trademarks of the giallo in Sergio Martino's The Strange Vice of Mrs. Wardh

For a long time now the Giallo has been rooted in a motif and theme that it was never intentionally meant to be involved with. Suspense Thrillers were the Gialli's initial origins, and something that has seemingly been forgotten. The off-shoots in terms of Slasher Gialli and Horror Gialli are fine, but really shouldn’t be seen as pure Gialli. To say they were Giallo inspired/influenced, and are a genre within the Giallo itself seem more appropriate, and even give these films their own voice and style. That everything, including the films that are at heart Mystery, Suspense Thrillers, with a little Gothic thrown in to make the films a little edgier and more intense, have been labeled Horror is kind of an insult to what Bava had originally intended them to be. Taking these films into more complex stories and including many twists and turns would have been a more interesting and appropriate way for the Gialli to improve. Taking the Giallo back to its roots seems more important now than ever as film distributors like Arrow Video, 88 Films, and Shameless Entertainment are bringing these films back from the dead, and because so many fans see them all as Horror films or Horror-esque, they're being wrongly labeled, companies forced to play up the Horror end, and many other fans are turned away from them, given the penchant of 70's Horror motifs. Now Lo Strano Vizio della Signora Wardh (The Strange Vice of Mrs Wardh) and La Corta Notte della Bambole di Vetro (Short Night of the Glass Dolls) are two examples of Gialli that blend both Mystery and Horror, but maintain their roots in the Mystery/Suspense Thriller status, as the goal of both is to uncover truths, and stop a criminal from resorting to more murder.