Giallo translated to English means yellow. It is a reference to the cheap yellow paperback horror thriller books that were sold in Italy during the mid 20th century. You could even call them Italian "pulp fiction" paperbacks. Giallo is now an expression used to describe the specific Italian subgenre murder mystery thrillers that became popular in the late 60s-70s. The gialli usually involved an unknown killer who preyed on beautiful women. This killer would only be seen in quick shots and the dark mysterious figure would often wear black clothing and gloves. The killer would also use sharp razor blades, butcher knives, ropes and other torturous methods instead of guns to murder his victims. The stories often had a protagonist that would try to investigate and solve the murders. When the killer was finally found, he would then commit suicide or be accidentally killed by one of his victims leaving many questions unanswered. Another very cinematic aspect of the classic giallo is the use of nightmare and dream sequences that would take the viewer into other realms. By using psychic visions and eerie dreams the director would twist the audiences thinking patterns and change the films linear storyline into a puzzle of purely cinematic images that added a psychadelic beauty to the story being told.

Tickled your fancy? Go on and keep reading: 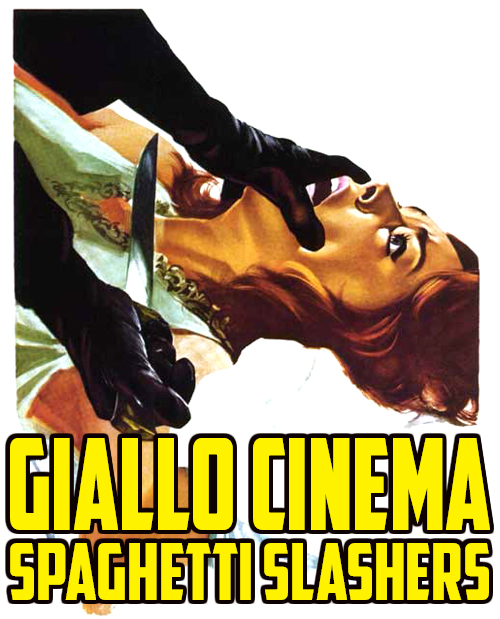 Mario Bava was a true pioneer and master of atmospheric horror cinema. His longtime work as a cinematographer helped him create visually psychadelic cinematic worlds that jumped off the screen and became almost mesmerizing. The first true giallo was Bava's black and white thriller The Girl Who Knew Too Much (1964). Bava's follow up to that film was a giallo called Blood and Black Lace (1964) which set the standard that every other giallo film would attempt to follow in years to come. Mario Bava went on to direct many of the genre's best films including the horror classics: 5 Dolls For an August Moon (1970) and Twitch Of The Death Nerve (1972). While Bava reigned as the master of the giallo thriller genre, he also explored many other genres like: sci fi-horror (Planet of The Vampires), comic book/action adventure (Danger: Diabolik) and teen comedies (Dr Goldfoot and The Girl Bombs). To learn more about Bava's works, I highly recommend the documentary Mario Bava - Maestro of the Macabre (now on DVD).

Dario Argento: The Beauty of Nightmares

After Mario Bava, another Italian director named Dario Argento would become the new master of the giallo genre. A longtime friend and student of directors like Bava and Sergio Leone, Argento crafted an ultra-stylish cinema with a new level of beauty and horror that was hard to match. Argento often left conventional plots behind and created his stories around pure cinematic visuals. While many critics considered this a negative aspect, cinema purists were turned on by his approach. His 1977 film Suspiria is a perfect example of this style of pure cinema. His most popular giallo films include The Bird With The Crystal Plumage (1969), The Cat O' Nine Tails (1971), Four Flies on Grey Velvet (1972), Deep Red (1975), Tenebre (1982), and Opera (1987). His supernatural giallo thrillers like the technicolor nightmare Suspiria (1977), Inferno (1980) and Phenomena (1985) are also classics. For more in depth information about Argento's films, I highly reccomend the documentaries: Dario Argento's World of Horror and Dario Argento - An Eye for Horror.

Other Italian maestros include the great horror auteur Lucio Fulci who created the classic gialli Don't Torture A Duckling (1971), A Lizard In A Woman's Skin (1971), The Psychic (1977) (1977) and The New York Ripper (1982). Other notable titles to look for are Short Night of the Glass Dolls (1971) and Aldo Lado's Who Saw Her Die? (1972) which are featured in Anchor Bay Entertainment's Giallo Collection along with Antonio Bido's The Bloodstained Shadow (1972). Many of gore director Umberto Lenzi's gialli are also available on DVD now including: Seven Blood-Stained Orchids (1972) and Spasmo (1974). More classic 70s gialli include: Massimo Dallamano's What Have You Done to Solange? (1972), Sergio Martino's The Strange Vice of Mrs Wardh (1970), The Case of The Scorpions Tail (1971), Your Vice Is A Locked Room and Only I Have The Key (1972) and Torso (1974).

The Giallo Lives On

Many Hollywood directors have been influenced by giallo cinema. The slasher film genre of the late 70s-early 80s (Halloween, Friday The 13th, My Bloody Valentine etc) was directly influenced by them. American Director Brian DePalma's execution of pure visual stylization is right next to the great Italian cinema styles of Bava and Argento. If you look at his horror-thrillers like Phantom of The Paradise, Dressed To Kill (1980) Body Double (1984) and Raising Cain (1992) you can see a strong influence from the Italian movies. Other notable Hollywood productions inspired by gialli are films like Paul Verhoeven's Basic Instinct (1992), David Fincher's Seven (1997) and Quentin Tarantino's Death Proof (2007).

Italy has continued to produce gialli over the past 25 years and directors like Mario Bava's son Lamberto Bava contributed to the genre with his own efforts such as A Blade in The Dark (1983). Dario Argento's assistant director Michele Soavi went on to start his own filmmaking career and directed the wonderfully stylish StageFright (1987). Dario Argento can still create great modern thrillers which follow many of the giallo formulas like his film Sleepless (2001).