After the success of AIP's previous attempt at "Youth domination" with Wild in the Streets, their follow-up took the subject to even more absurd extremes. Roger Corman would sit behind the director's chair this time around to help give us Gas-s-s-s, a truly bizarre, but entertaining, view of a post 60's counter-culture dystopia. 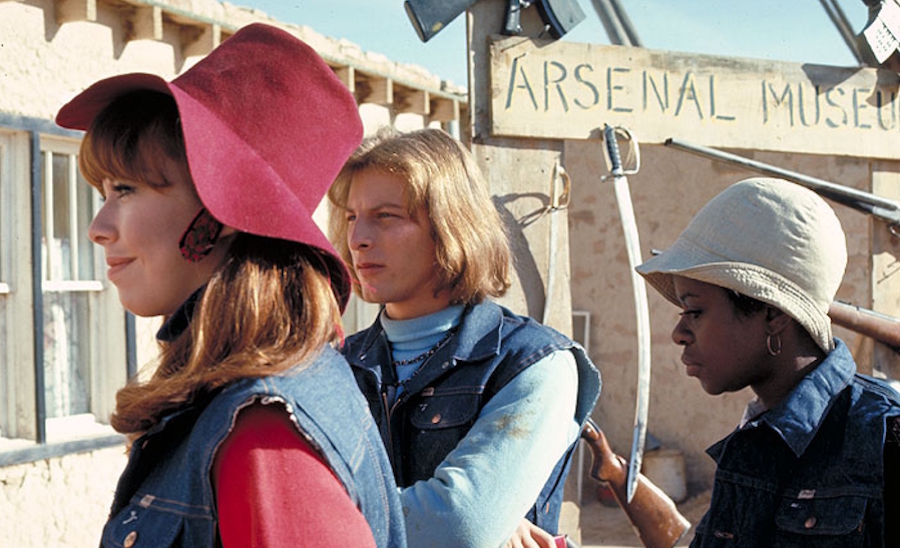 Whereas Wild in the Streets had adults being overruled by the youngsters, here in Gas-s-s-s, they're just simply gone. Thanks to a chemical gas accidentally released by the right wing powers (in an amusing animated intro) which kills anyone over 25 years old. 60's rock stars Country Joe & The Fish (who appear in the movie) sing it loud for everyone to hear:

Opening in Dallas, we meet our lead character, Coel (Bob Corff) who is some sort of a free-minded, young priest, who runs off with his girlfriend, Cilla (Elaine Giftos) to the Southwest (They had to get out of Dodge after finding out that the Gestapo-like police force will soon be running Dallas) but things might not be as safe and free elsewhere. Which they find out when their car is stolen by cowboys in cowboy fashion! Coel & Cilla then hook up with music junkie Marissa (Cindy Williams) and her boyfriend Carlos (Ben Vereen) along with horny Hooper (Bud Cort) and his girlfriend Coralee (An almost unrecognizable Talia Shire). A clique is formed and the gang sets out to find the ultimate peaceful settlement where this new era of mankind will begin. But of course, not everyone shares this attitude. Including Marshal McLuhan (Lou Procopio) though McLuhan and his gang are dressed like Hell's Angels, they actually ride...Golf carts! But the biggest threat are The Warriors. They are a football team (With cheerleaders!) who dominate cities using football tactics. Warrior team leader Jason (Alex Wilson) will look to butt heads with Coel once the best settlement will be found. God help us! Oops, sorry for the spoiler. God does intervene!

Just by looking at this, you know this had to have been a blast to film for the cast and crew since this was an "Anything goes" type of movie. And it should be noted that this certain brand of material wasn't new to Corman. All one needs to see is his previous, Creature from the Haunted Sea, which contained a similar type of wild humor. But this was obviously a more ambitious attempt. Yet, we all know that major moolah wasn't necessary for Corman's vision because he had the magic to make movies look more expensive than they actually were. This may also be the fastest-moving film I've seen directed by Corman. Meaning that he doesn't seem to hold a shot for more than five seconds. A far cry from his earlier directorial efforts. The script by George Armitage is also responsible for helping make this one of a kind. Nearly every line of dialogue contains some sort of punchline and Corman's pacing brilliantly compliments the off-the-wall concept of this project. And speaking of Corman's early directorial efforts, I find an amusing, but also touching, nod to be found within this film. It involves the mysterious character of Edgar Allen (Bruce Karcher) who serves as some sort of conscience for Coel's quest. And since this was the last film Corman directed for AIP, it was as if the Edgar Allen character symbolized a send-off from Corman to the studio that he helped build thanks to his Edgar Allen Poe films. I wouldn't have thought of a better way to say goodbye.