For the past eighteen years, Jackie Yates (Deborah Fairfax) has been caring for her rebellious sister Debbie (Kim Butcher) because their parents have been locked away in a mental institution. It seems that Dorothy Yates (Sheila Keith) had been killing off and cannibalizing lonely people who were misfortunate enough to show up at her home for a tarot card reading and her husband Edmund (Rupert Davies), while relatively sane, decided to help her cover the crimes up out of desperate love for her. Upon their release from the institution, Jackie also starts caring for them (by bringing raw meat to her mother in the hopes that her taste for human flesh would not arise again), which strains her relationship with Debbie even more. When Jackie's efforts to keep her mother on the straight and narrow begin failing and more lonely people start dying, she thinks things have gotten pretty bad. What she doesn't know though is that it seems the murderous trait has been passed down to Debbie and things are about to get a whole lot worse.

Frightmare, which was directed by cult British filmmaker Pete Walker, is a film that could almost be described as a British version of The Texas Chainsaw Massacre. Though there aren't any blazing chainsaws going off in the film, the entire premise of a secluded cannibalistic family is somewhat similar to the Tobe Hooper cult classic. Oddly, the entirely British cast gives the film an air of class to the otherwise grisly proceedings that our old pal Leatherface and his backwoods clan didn't seem to have. 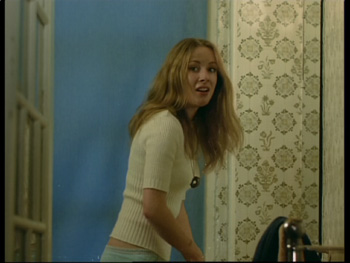 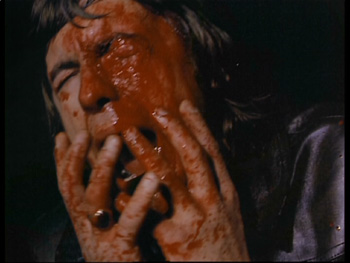 What makes this film seem even more classy is the depth given to the characters. Screenwriter David McGillvray (basing his screenplay off of a story by director Walker) fleshes out the characters perfectly amidst all the bloodshed and really gives you people to care for. He even manages to make the cannibalistic Sheila seem sympathetic (a trait which can also be attributed to Sheila Keith's performance) throughout portions of the film. I have been wracking my brain ever since I saw this film and can think of very few horror films I have seen recently that actually gave me characters which I honestly cared about.

Despite being known as a goremiester, Walker's film doesn't seem to be quite as bloody as his reputation would imply. While the film can be brutal at times, the gore in the film tends to run a little towards the somewhat unrealistic Herschell Gordon Lewis style of nastiness (i.e. obvious stage blood that is a little too dramatically red). That being said, I'm sure that there are few people who won't shy away during scenes like the one where Dorothy beats a woman to death with a fireplace poker.