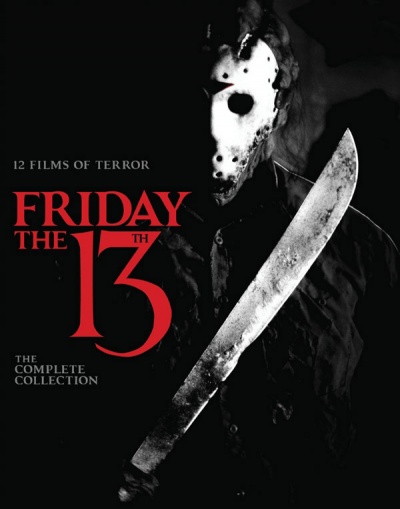 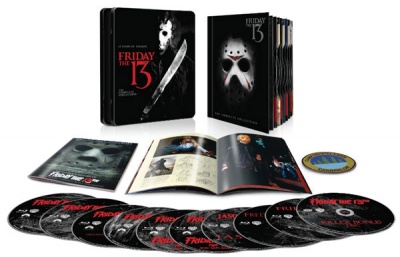 On September 13th 2013, Warner Bros. Home Entertainment will provide plenty of blood-curdling thrills when Friday The 13th: The Complete Collection debuts on Blu-ray™. For the first time, all twelve Friday the 13th films will be packaged together, (with seven of them making Blu-ray debuts) as a result of a strategic distribution alliance between Paramount and Warner announced last fall, granting Warner exclusive video distribution rights to over 600 Paramount titles.

The set also includes a Friday The 13th Killer Extras Bonus DVD. This intense ‘slasher’ series is one of the longest-running and most successful horror franchises in film history, surpassing the domestic theatrical box-office grosses of such legendary series as A Nightmare on Elm Street,Halloween and The Texas Chainsaw Massacre. The film that turned psycho killer Jason Voorhees and his infamous hockey mask into a pop culture icon has also bested the horror competition as the #1 home entertainment seller, with total sales of $119.7M to date.

The 10-disc collection ($129.95 SRP) includes the twelve films on nine Blu-ray discs, as well as a killer DVD bonus disc full of special features on the making of the famous franchise. The must-own set will be presented in a collectible tin case with 11 hours of previously released special features and a 40-page soft cover book. The book is excerpted from Crystal Lake Memories: The Complete History of Friday The 13th, a fan-favorite volume that’s viewed as the ultimate memoir of the series, and highlights some of the 200 interviews, 600 photos, storyboards, concept art and more. Also included is a brand new, official Camp Crystal Lake embroidered Counselor Patch.

Friday The 13th: The Complete Collection also includes digital versions of all 12 films with UltraViolet™, allowing viewers to download and instantly stream the films to a wide range of devices from computers and compatible tablets to smartphones, game consoles, Internet-connected TVs and Blu-ray players.

One of the most frightening franchises in film history, Friday The 13th focuses primarily on the character of Jason Voorhees, who drowned as a young child at Camp Crystal Lake due to the inattentiveness of camp counselors. Many years later, the camp becomes the scene of a number of murders – all of which are either committed or motivated by the avenging Jason, who forever lurks at Crystal Lake with his finely-honed machete.