The year is 1959. The place is Camp Crystal Lake. A group of camp counselors sing some folk songs in front of the campfire. After the song is over, two of the kids, a girl and boy, go up into the cabin to have some fun. As they make out, we see there is a figure stalking through the cabin. The kids hear the noise of someone approaching and quickly get dressed. Suddenly the figure strikes out stabbing the boy. The girl frantically tries to get away, but it's no use. The deadly attacker has her cornered and as the film moves into a slow motion effect, the girl screams and the screen brings up the iconic opening credits of the film. This is Friday The 13th, the legendary slasher film. 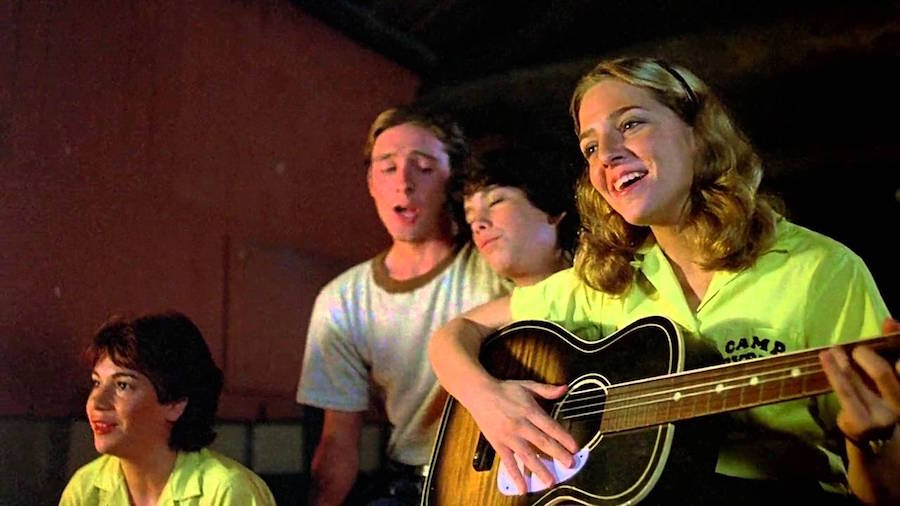 Flash forward, 20 years later. It is June, Friday The 13th, 1979. We meet a young traveler named Annie (Robbi Morgan) who's going to work at the re-opening Camp Crystal Lake. Annie is unsuspecting of the terror that awaits her, but after stopping at the local diner and asking for directions to the camp, she is greeted by a bunch of locals who are stunned to hear where she's headed. One of the patrons offers to give her a ride, but as they go to leave, an old man named Crazy Ralph (Walt Gorney) declares Camp Crystal Lake is cursed. The truck driver (Rex Everhart) tells Annie to just ignore the old man. They get in his truck and drive down the country road and he tells her the real history of Camp Crystal Lake or as the townspeople call it: Camp Blood. Annie finds this to be funny and isn't frightened or even stirred up by the tall tale the man tells her. He then tells her to quit the camp job and leave. She relents and dismisses his story explaining she can't just quit. When he drops her off at the road leading to the camp he tells her to be safe. Annie starts to makes her way down the long road. 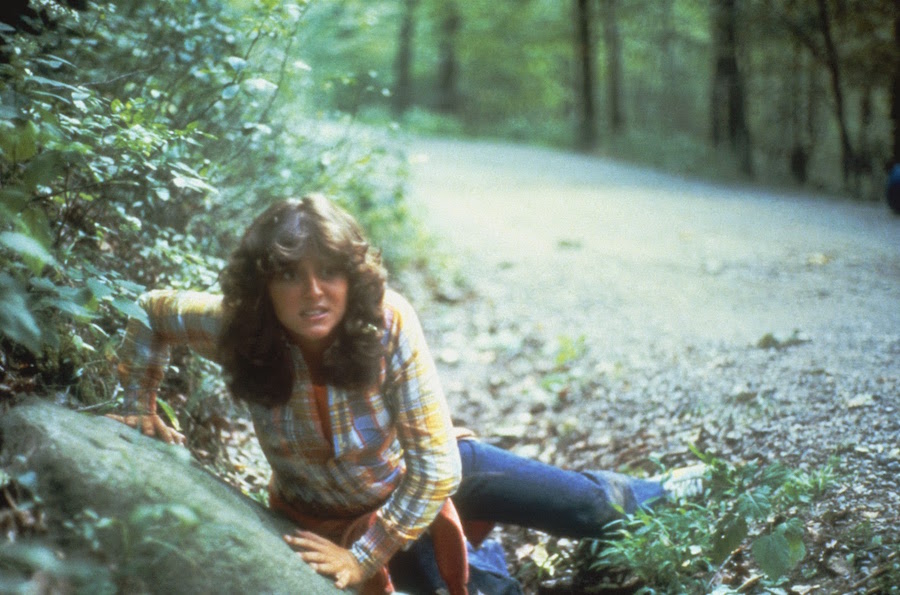 Steve Christy (Peter Brouwer) a local resident of Crystal Lake is trying to re-open the camp and he's got a great bunch of kids coming to help him. His main assistant is Alice (Adrienne King) a cute blonde girl who's supposed to go back to California soon on personal business. Steve tries to get her to stay, but Alice isn't sure if she should. Meanwhile, Annie gets a jeep to stop to give her a lift to the camp, we never see the driver which gives us a strange feeling. Annie jabbers on about what she's doing in her life as the jeep passes the Crystal Lake driveway. Annie points out that they missed the turn off but the driver doesn't stop. The jeep barrels down the road and when Annie yells to at the driver to please stop, the jeep picks up even more speed. Annie jumps out and luckily doesn't get too seriously hurt. She limps into the woods to get away from the mysterious crazy person. The driver of the jeep backs up towards Annie and then begins to chase her down. Annie runs through the woods, but suddenly, the unseen killer corners her and slices Annie's throat open.

Back at the camp, the new counselors are getting the place ready. While they all get to know each other, the mysterious killer is watching them from the edges of the camp as we see through the classic killer Point of View shot (a cinema technique originally used in Black Christmas and Halloween, this effect has since become a staple of the slasher film genre). When Alice and the others are in the kitchen getting things fixed up, she opens the door to the pantry and Crazy Ralph is standing there. He tells them that they should leave and that the camp is cursed. Crazy Ralph gets on his bike and quickly rides away. Ted, one of the kids, walks down the edge of the lake, as he's coming towards a cabin he sees a figure walk into the cabin door. He tries to see who it is, and goes inside. Two other kids, Jack (Kevin Bacon) and Marcie (Jeannine Taylor) have a chat near the water and as they talk the lightning and thunder rumble. As the rain begins to come down, they run off to the same cabin Ted had gone into. They get undressed and make love for awhile. As the lightning flashes, we see that Ted s bloody body is above them on the top bunk. When Marcie and Jack are done making love, Marcie decides to go wash up and Jack lays on the bed and decides to smoke a joint. As he smokes, a drop of blood hits his face from above, when he sees it's blood, suddenly a hand from below grabs his head and a sharp arrow slams through his throat as blood spurts out (one of the classic scenes in the film). 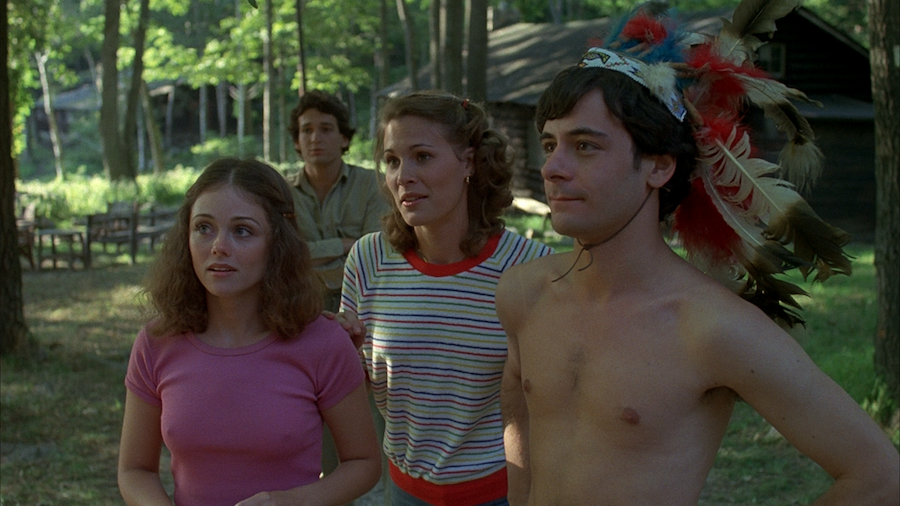 Steve Christy has been away doing some errands and now that it's late, he needs to get back to the camp. After his car breaks down, a local cop picks him up and brings him back to the camp, only before they get there, the cop gets a call about a huge accident nearby. The cop has to drop Steve off at the end of the road to the camp. As Steve approaches the camp he sees a bright light from behind the large camp sign, he approaches the light and we see he knows the unseen person, but then suddenly he is stabbed. 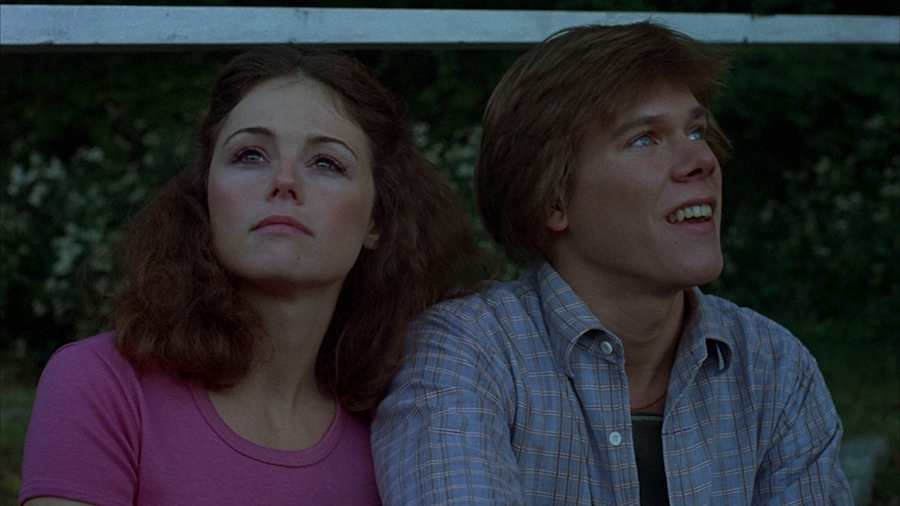 One by one the rest of the kids are killed by the mysterious stalker. Meanwhile, Alice and the remaining group play a game of strip poker and have a good time, unaware that the deadly killer is stalking them. After the game is over, one of the girls goes back to her cabin to go to bed. Alice and Ned are alone but then the lights go out in the camp. The power generator has stopped. Alice and Ned go to see what's going on. When they get there they find that the generator is out of gas. Alice and Ned get separated and Alice decides to take a nap while Ned fixes the generator. When Alice wakes up, she heads over to the main office, but when she closes the door, she sees Ned's body impaled by arrows. Alice runs back to the main cabin and is frantic. She closes the door and tries to tie a rope holding the door closed. She is really startled when one of the other female counselors' dead body flies through the window.

Suddenly, Alice sees some bright lights coming from outside and a vehicle stops and someone gets out and comes closer to her. As Alice runs towards the figure we see it's a woman. Alice is completely freaking out, telling the woman that everyone is dead. The woman tries to calm her down, then introduces herself, her name is Mrs. Pam Voorhees (Betsy Palmer). Mrs Voorhees explains that she's a long time friend of the Christys and that everything will be alright. Alice tells her not to go into the cabin, because the killer will get her too. Mrs. Voorhees tells Alice calmly that she's not afraid of the killer. 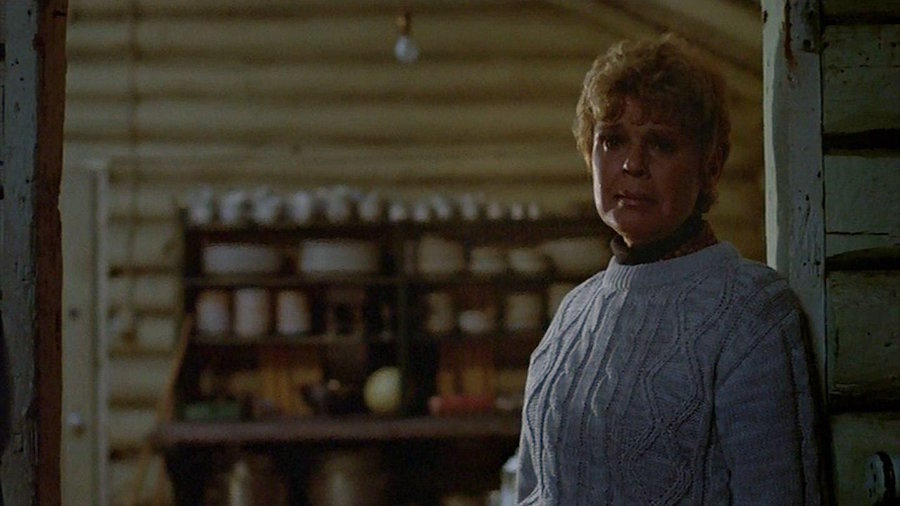 Alice shows Mrs. Voorhees the dead bodies but she doesn't seem afraid or startled, she seems as if she has pity for them. "So young" she says. Mrs. Voorhees starts to go off on a rant about why the camp shouldn't have been reopened and she tells Alice all about her son, her poor son Jason that drowned 20 years earlier. Jason was her life, and the camp counselors let him drown, they didn't hear him crying out for help because they were making love. Mrs. Voorhees begins to get angrier and angrier and Alice realizes she's in trouble. Mrs Voorhees snaps and runs towards Alice aiming to kill her, but Alice whacks Mrs Voorhees with a fire poker. As Alice runs from Mrs. Voorhees, we see she has a split personality and she speaks like she's possessed by her dead son Jason. Mrs Voorhees/Jason says "Kill her mommy, kill her" and replies to her son's voice.

Mrs. Voorhees chases Alice around the camp and corners her a few times, but Alice gets away. Mrs. Voorhees and Alice fight on the beach, wrestling and they have a good catfight, slamming each other down in the sand. Alice finally gets free from Pamela's grip she runs towards the machete and picks it up, as the film turns to slow motion we see Pamela Voorhees' face react as Alice uses the machete to slice off Mrs. Voorhees' head! The body slowly falls down as blood spurts from the neck stump (great FX work!). Alice then gets in a canoe and paddles out into the middle of the lake. The next morning we see her slowly awake as tranquil music plays, as the camera pans in the mood is shattered and Jason Voorhees' (Ari Lehman) pops out of the water and pulls Alice into the lake.

This classic American slasher film has influences in the Italian gialli like Twitch Of The Death Nerve, and from proto- 80s slashers such as Psycho and Black Christmas. Sean S. Cunningham does an excellent job reinventing the horror film into a more streamlined, intense and terrifying effect. Friday The 13th is a must see for any horror fan. Along with films like: Halloween and A Nightmare on Elm Street, this is the real deal. Highly recommended!!