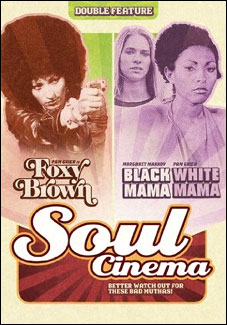 FOXY BROWN Foxy Brown (Pam Grier) has found her soul mate in an undercover narcotics investigator, but when he is brutally murdered, she swears vengeance against the crime ring responsible. Posing as a call girl to gain access to the ring's inner circle, Foxy discovers just how high the corruption extends, igniting a blistering war that takes her from the city streets to a remote drug laboratory to a breathtaking mid-air battle behind the controls of an airplane! But the most startling confrontations are yet to come, as she schemes to bring down her boyfriend's killers in ways they never could have imagined.

BLACK MAMA WHITE MAMA Pam Grier is Lee Daniels, a prostitute doing hard time in an island prison camp for women where the guards have a new way to punish inmates who fight: by cuffing 'em together! Chained to her bitter rival, white revolutionary Karen (Margaret Markov), Lee finds herself literally linked to the revolutionary cause -- and on the fly -- when Karen's guerrilla friends stage a coup! But this foxy inmate's got a cause of her own in the form of a secret stash of cold, hard cash and a getaway boat! Brawling with her white counterpart over which way to go, and tracked like a dog by guards, guerrillas and a gangster after the loot, she's gotta make her escape -- before both mamas' enemies bring them down for good!