Flying Through Hollywood by the Seat of My Pants: From the Man Who Brought You I Was a Teenage Werewolf and Muscle Beach Party 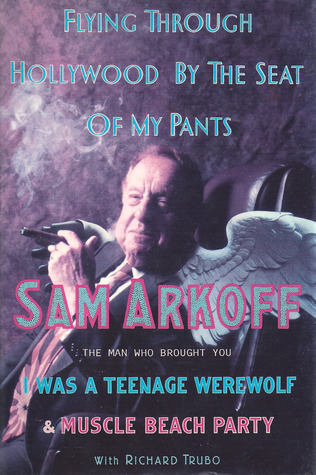 Brisk but too tasteful autobiography of cheapo independent filmmaker Arkoff, and a catalogue of the dreck he has dredged--much of which was lively and likable. Cigar-puffing Arkoff focuses here on finances in his film career, which has largely been concerned with distribution. He began as a lawyer by producing and distributing a situation comedy that briefly went national on NBC. Then he fell in with Jim Nicholson, sales manager of a small film company, and together, in 1954, they founded American International Pictures on a nest egg of $3,000. At that financial level, AIP had to make money with each picture just to make its next picture--Arkoff received no salary for four years. For the most part, his directors had a free hand if they kept within the band-of-steel budget. AIP pictures played the bottom half of double bills and deliberately appealed to adolescents at drive-in passion pits. That slot returned AIP a flat rental fee while top-of-the-bill pictures paid their studios a box- office percentage. Arkoff and Nicholson saw that if they could make up the double bill themselves--two creature features at once (I Was a Teenage Werewolf, I Was a Teenage Frankenstein, The Amazing Colossal Man, etc.), two beach-blanket flicks, two school pictures (Reform School Girl, The Diary of a High School Bride), or two fast-car or science-fiction flicks--they could ask for almost the same cut as the studios. Enlisting director Roger Corman, the fastest filmmaker alive, gave them product and led to their celebrated line of Poe-inspired horror films. AIP also released dubbed Italian epics, then expanded into more expensive works such as The Amityville Horror and Brian de Palma's Dressed to Kill. Later, Arkoff gave up distribution. He is now lensing a sequel to his own Machine-Gun Kelly. Abominations of the Atomic Filmmaker. Photographs (not seen) should add lift. (Amazon)