Fiend of Dope Island (1961, USA) is a Crime film directed by Nate Watt. 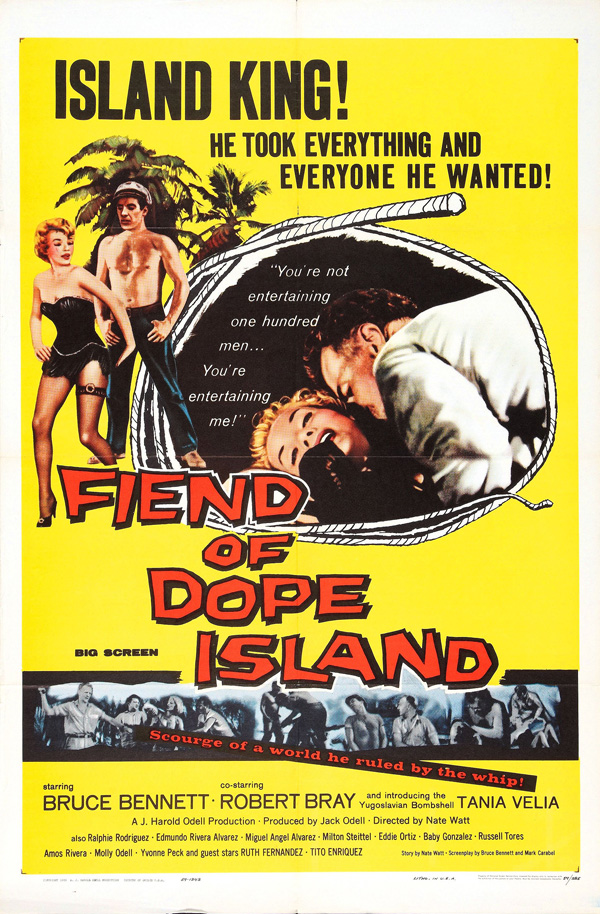 Fiend of Dope Island, also released as Whiplash, was a lurid men's adventure type motion picture filmed in 1959 and released in 1961. It starred and was co-written by Bruce Bennett and was the final film directed by Nate Watt. It was filmed in Puerto Rico where producer J. Harold Odell had previously filmed his Machete (1958) and Counterplot (1959). Several scenes were censored for the United States release. The film co-stars Tania Velia billed as the "Yugoslavian Bombshell" who had appeared in the July 1959 Playboy and Puerto Rican actor Miguel Ángel Álvarez. Charlie Davis runs his own island in the Caribbean with a literal whip hand making his income as a marijuana grower, exporter and gunrunner. He hires a female entertainer to amuse the clients of his cantina and himself. Charlie's world falls apart when one of his employees is an undercover narcotics investigator. The trouble escalates to a full native rebellion and shark attack. (Wikipedia)