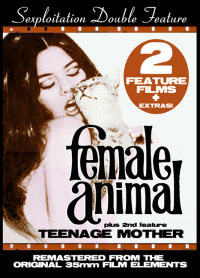 Female Animal (1970) All Female, All Animal! Penniless Angelique’s beauty and sensuality catch the attention of wealthy shipping tycoon Count Medici, who installs her in his household as a maid. Now pampered and adored, she eventually finds herself at the center of a bizarre love triangle and power struggle that involves the Count, his sexy mistress Francesca, and his playboy son Alain.

Teenage Mother (1967) – First Time on DVD The Film that Shocked Parents Across the Country! Raging hormones and drug-use cause havoc at the local high school when a young girl tries to trap her boyfriend into marriage, and a pot-crazed student attempts to rape the new Swedish sex-education teacher. Best remembered for its shocking footage of an actual childbirth!