One of the most iconic images of 80s grindhouse films is of the welding mask-wearing vigilante from The Exterminator firing off his weapon of choice – A flamethrower. (It currently dons the cover of the recently released NIGHTMARE U.S.A., a veritable encyclopedia of exploitation films.)

The film itself is one of the best and nastiest of the revenge flicks (right up there with Death Wish 2). Directed by B-movie action maestro James Glickenhaus (THE SOLDIER, SHAKEDOWN) it’s relentlessly ugly, grim and takes-no-prisoners kind of stuff. It also consists of a ridiculously grindhouse-friendly cast that includes Robert Ginty (WARRIOR OF THE LOST WORLD), Christopher George (Pieces, Grizzly), Samantha Eggar (Demonoid, The Brood) and the much-missed, late, great Steve James (Vigilante, the American Ninja films). If you’re able to read between the lines, it’s a must-see for any and every cult movie aficionado. And there’s THE EXTERMINATOR 2...

Since the first film vigilante John Eastland (Ginty) has continued his hobby of torching bad guys while also looking for a job. Garbage man Be Gee (Frankie Faison), a pleasant, easygoing black guy and inevitable corpse, is able to get him hired at his workplace. It's while working together that they first tangle with a group of punks who belong to a gang run by X (Mario Van Peebles in one of his earliest roles). Amidst their escalating warfare “John” unknowingly scorches the gang leader’s kid brother and subsequently leads to his dancer girlfriend Caroline (Deborah Geffner) being crippled, raped and killed as retribution. When Be Gee is then murdered, The Exterminator declares all out war on X and his henchmen. 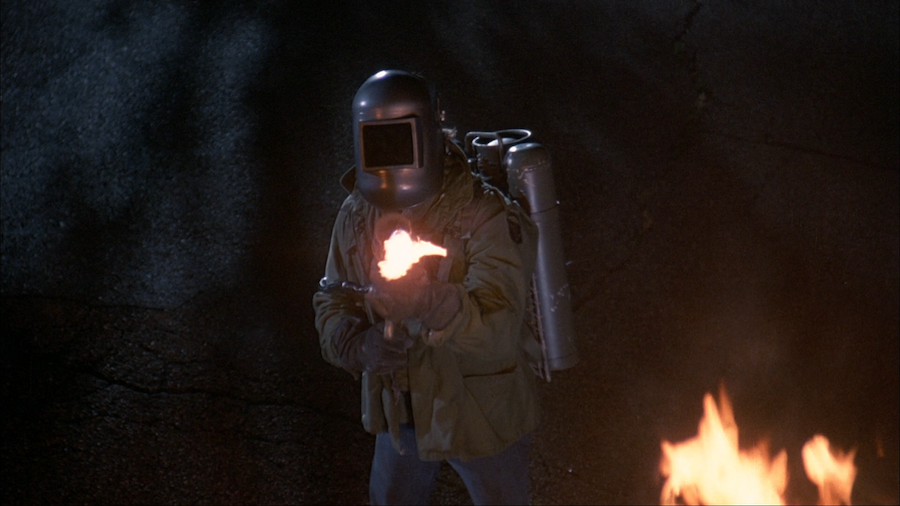 THE EXTERMINATOR 2 has got to be one of the most disappointing sequels to ever come along. Its lunkheadedness results in a movie that is enjoyable for all the wrong reasons. It goes wrong on so many different levels, including such key mistakes as the following: First and foremost, Glickenhaus is gone and has been replaced by Mark Buntzman, who produced the first film. His obvious cluelessness as writer and director are especially made apparent by the fact that to this day they remain his lone credit in either capacity. A key example is the scene in which Caroline is kneecapped by some of the thugs. Slo-mo, intercut shots of “John” and a horseback cop individually giving chase makes it look more like the two are in some sort of dead-heat race.

Secondly, for all the grittiness of the first film THE EXTERMINATOR heartily embraces the tackiness of the 80s-- The returning Ginty’s love interest isn’t just a dancer but a flashdancer (cheese-tastic routines and all), the villains resemble a cast of dancers from “Mad Max – The Musical” (who would then be recast in Cannon’s Death Wish 3 the following year).

Third, the editing is poor and disjointed, which could be partially be the result of it being heavily edited to retain its R-rated. (It also explains the surprising lack of gore that makes the movie feel stilted and dull.) This, however, does not explain a script that so clumsily struggles to just to retain any sort of logic or cohesion.

Fourth is the laughable villain X, made even sillier from Van Peebles’ overwrought, oddly effeminate performance (that includes occasionally sporting body glitter). His ongoing totalitarian rhetoric (“I am the streets!”) comes across like he’s poor knockoff of The Warriors' Cyrus.

Lastly comes the failure of what should’ve been the movie’s ace-in-the-hole...The garbage truck renovated into a killing machine. The producers are well aware it’s a big selling point since the vehicle is featured so prominently on the promotional material. Unfortunately, the film version only lives up to expectation (for the most part) in appearance. Its destructive capabilities proved extremely limited since John barely drives the truck post-transformation and chooses to take out the majority of punks with machine guns attached to the truck. (Weak!) Just the imagined image of The Exterminator speeding down the late-night city streets indiscriminately mowing down thugs is all it takes to realize just how much of a maddening failure THE EXTERMINATOR 2 has turned out to be.