Eugenie... the Story of Her Journey Into Perversion BluRay review 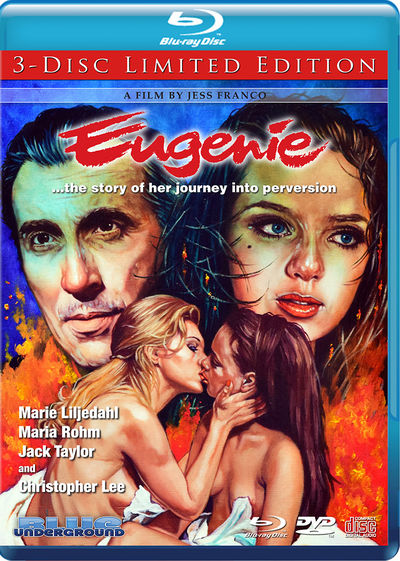 Eugenie (Maria Liljedahl) is a Spanish teenager battling the usual problems of teenagers: annoying parents and an urge to break out and explore the world. Conveniently, she met Madame Ange (Maria Rohm) a while ago at a party. Rich and beautiful, she formed a friendship with the young girl, and uses her affair with the girl's married father to get her out of the house on a weekend trip to her private island she inhabits with her creepy brother Mirvel (Jack Taylor). As the girl enjoys the perks of rich life, it seems each night she is plagued by terrible sadistic dreams with a reoccuring priest (Christopher Lee) orchestrating her cruel pain and pleasure. Her hosts tell her she had too much to drink and it was all a bad dream, but it might not be, and so she slides deeper into the weird things happening on the island, a sinister and perverted secret.....

Jess Franco's take on the Marquis de Sade this time is completely different. Mentioned in the movie is a wicked order that pledges allegiance to the teachings of the Marquis, and apparently they need fresh flesh for their sadistic (that's where the name is from) rituals. In Madame Ange's house, Eugenie finds one of the Marquis' books, and quoting from it becomes kind of a thread that holds this movie together. Whereas Justine is set in medieval times, this film is not so much an adaptation (of "Philosophies in the Boudoir") but an inspiration of de Sade's work. We're now in the swinging 60s or 70s, and sexual liberty plus rebellion against the conservative post-war attitude of the older generation is en vogue. That's a main reason why this movie works so well - and why I like it a lot better: coming from that era, and telling a story placed in that era, works a lot better than underfunded period pieces that just seem corny from today's perspective.

So we embark on a sleazefest of a film with nice psychedelic music by Bruno Nicolai and some beautiful island locations? Not quite. This is an underambitious, not even 90min adventure that plays out a bit like TV fare at first, and only slowly develops the sexploitation character that has earned the movie X ratings and banned status in several countries. From today's perspective totally ridiculous, but not completely unjustified. So what's the raunchy aspect about this movie? What's the lurid content? I think two aspects have really pushed the boundaries here. One is the fact that Eugenie is being drugged and then abused, not just abused. And the other is, that eventually whippings and torture are shown in semi-direct ways that might have been off-putting in that context back in the days. Now, it's still questionable stuff, but with all the colors, camera angles and funky music, it's merely an artsy low-budget erotica flick than anything else.

Franco has made a crazy range of movies, and it's always a joy to experience films where he manages to strike an unlikely balance between perversion and art. Eugenie is, aside from a few timid scenes, ridiculously tame, and not much of a masterpiece. What I like about it is its small scale, the number of artsy shots (some moments have an almost Fellini touch to them) and great music, and most of all the almost terrifying atmosphere he creates. Here's where moral comes into play. The sick thing about this movie isn't the sadistic violence or the mutilation or the basically kidnapping of an underage girl and her drugging and rape (no wait, seriously), the sick thing is that in the end there's a horrible twist in the story and the crazy moral of the story is that all the while you think Eugenie is the victim, in the logic of the characters involved she is very much to blame for herself, for it's her openness to perversion that has brought her into this mess.

So in the end when we see Lilijedahl (who rose to fame with Inga) her running around naked on the island during a beautiful sunset, after we witness a small number of funny Christopher Lee appearances (who jumped in on short notice after the previously intended actor died in a plane crash), we're left with the rare impression that yea, this movie is entertaining fun and we can laugh about it 40 years later, but it also leaves you with a funny feeling in your stomach, and I think Franco wanted the audience to feel really conflicted about the message of this movie. Not sure if I can forget Jack Taylor's near-robotic performance though.

What about the BluRay? The transfer is kind of a mixed bag. While most of the film sports the pristine 4K restored transfer, there are too many moments during the film where the camera seems out of focus, the image blurry or even distorted. And I don't think this is a stylistic device for the most part. So to put a dent in the high hopes, I don't think this is the absolute top notch transfer, but overall it's still a very decent looking BulRay with lots of color and contrast, and some beautiful images. The audio track is fine, and while I think the dub is not the highest quality (at least Lee dubbed himself), it's okay. There's a slight noise audible but for the most part there's nothing to complain about.

In terms of extras, there's "Perversion Stories - Interviews with Director Jess Franco, Producer Harry Alan Towers, and Stars Marie Liljedahl & Christopher Lee" (17 mins) which goes into the making of the film helped by a bunch of very enlightening interviews, and in part seems to use film clips from an older transfer; as well as "Stephen Thrower on EUGENIE - Interview with the author of "Murderous Passions: The Delirious Cinema of Jesus Franco"" (18 mins), another highly informative interview with the insider. An adapted version of his texts form the booklet accompanying this release. The interview is a good addition to the booklet, and should wet your appetite for potentially diving into his extensive book Lastly there is the Theatrical Trailer and a Poster & Still Gallery.

Along with the BluRay version, the set also comes with a good old DVD version of the flick (maybe to lend to your friends who for some weird reason don't have a BluRay player), and - what is really nice - the CD of the original motion picture soundtrack. Bruno Nicolai scored this film (he also scored Justine), and it is a wonderful and actually quite memorable soundtrack. It's a funky 70s psychedelic score that makes great for some background listening in fact. I for one, am past the age of CDs, but it is a great collector's item. On top of it another goodie for collectors: the 20-page booklet, which comes with a text by author Stephen Thrower (the author of this book). Among other things it lifts the mystery over the question whether this movie was ever screened in the UK.

Special thanks to Blue Underground for providing a review copy of the release, and thanks to Blu-ray.com for taking some great screenshots, two of which I used above.