What started out as a joke between friends about making a movie where a street vigilante disposes the neighborhood of derelicts and bums by violent methods was on it's way to becoming a reality. You can thank director Abel Ferrara for that.

The story centers around an aspiring painter named Reno Miller (played by Ferrara under an alias, Jimmy Laine), who lives in an apartment with his girlfriend, Carol (Carolyn Marz) and her (sometimes) swinging roommate, Pamela (Baybi Day). Bills pile up and frustration begins to tamper with Reno, who's just trying to finish painting his newest masterpiece of a buffalo. Reno hopes his exhibitor, Dalton (Harry Schultz) could make a success out of it. New frustrations suddenly grow when a band of punk rockers, led by singer, Tony Coca-Cola (D.A. Metrov under the alias, Rhodney Montreal) invade the fourth floor of the apartment building and bombard the building with constant performing, rehearsing, and recording. This begins to make Reno an unhappy camper. Adding fuel to the fire is Pamela's choice to become a groupie for Tony's band, "The Roosters," plus Carol is now having second thoughts about returning to her ex-husband, Stephen (Richard Howorth). It all eventutally mounts up to Reno snapping. 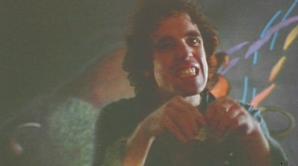 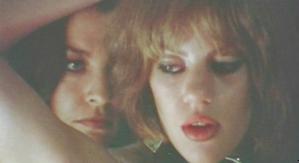 So, when inspired by a "Porto-Pack" commercial, Reno decides to arm himself with a power drill to take his frustration out on the poor, drunken bums around the nearby neighborhoods. But don't think of this as A Bucket of Blood, where the ostracized, struggling artist made prized possessions out of the dead. Reno Miller just simply likes to drill people up and could care less about making "Art" of it. Although, towards the end of the movie, he does dress himself up in a suggestive way to make some sort of "Fashion" statement to a non-derelict victim.

I have to admit that I seem to have had a love/hate relationship with this movie. Sometimes, I'm looking forward to re-watching it for an umpteenth time, but on other occasions, I feel too frustrated to re-visit it. It may sound strange, but anyone who has seen the movie could probably agree. To begin with, Driller Killer doesn't follow the rules of the standard slasher that was to come in the following years - The ones that involved a masked-maniac who stalked horny teenagers. Here, you've got an unmasked painter who kills random winos (not one poor derelict ever gets his moment of character development, unlike the teenyboppers), plus the film's conclusion might be seen as unsatisfactory to many fans of the genre. But upon repeated viewings, I've managed to ignore one of the first grudges I previously had with the film, which was it's often-amateur look. It no longer bothers me now. 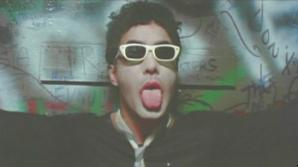 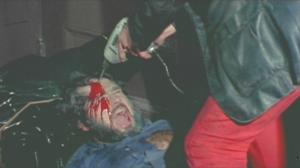 Now, as far as the stuff goes that I have always admired, those moments still stand strong. For example, the heavy, booming soundtrack on display by an early synthesizer, the nutty performances by Metrov and Ferarra (Ferrara often jokes that he wishes someone else could've played the role, but Abel IS and will always be Reno Miller to me) and the early punk-music scene on display (even if I'm not a fan The Roosters music).

However, the biggest winner of them all (and I'm sure I'm not alone on this) is THE DRILL! Holy moly! Those killing scenes displaying the drill in action just never get old do they? Some very nice splatter effects given the time the film was made and for it's on-again, off-again production task.

As many cinema-enthusiasts should know, Ferrara would continue to have quite a splashy and controversial career as a filmmaker in the following decades, but even though he really hasn't put together a full-fledged horror movie since then, he should be credited with creating what may be the world's first "intellectual urban gutter slasher flick".

And you can only find something like that at The GCDb.