Dracula Has Risen From the Grave/Review

< Dracula Has Risen From the Grave

The 4th installment in Hammer studios long-running Dracula franchise not only sees the Prince of Darkness rise from the grave but also survive having a wooden stake buried in his chest. Everybody knows that a stake through the heart is the only sure-fire method of dispatching a vampire but the folks at Hammer were not above bending the rules of undead folklore when the power of the box office compelled them.

James Bernard’s bombastic score and an eye-watering psychedelic credits sequence segue into a chilling opening scene in which a young girl’s bloody corpse is discovered hung upside down inside a church bell, the horrible wounds on her neck prompting a terrified priest to exclaim: “When shall we be free of HIS evil?” 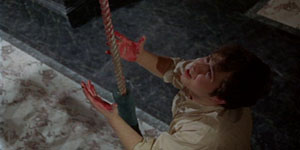 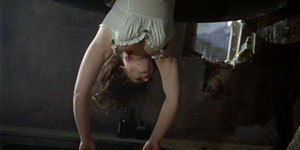 The action jumps forward a year to find Monsignor Ernst Muller visiting the church only to discover it dirty and derelict and the priest getting shit-faced in his local boozer. Despite the events in the previous film which lead to the downfall of Dracula: Prince of Darkness fear of the vampire’s ghost still dominates local superstitions. Determined to prove that there is no longer any threat to their necks Muller drags the reluctant priest with him up the rocky mountain path to exorcise the spirits of Castle Dracula. While the Monsignor is busy fastening a crucifix to the castle door the cowardly priest trips and falls on the frozen mote beneath the surface of which the castles undead owner is trapped. A cut on the priest’s head trickles blood through a crack in the ice and into the eager mouth of the hibernating vampire and as thunder and lightning flash and crash across the sky the accursed Count is reborn to start his campaign of terror anew.

Unaware of the evil unleashed Monsignor Muller returns home but with the weak willed priest now his slave Dracula soon follows in hot pursuit, setting his sights on Muller’s virginal niece Maria as means to exact revenge for the desecration of his unholy abode.

It is interesting to view Muller’s blessing of Dracula’s home as the mirror image of the vampire’s desecration of the church in the film’s opening scene. The inverted crucifixion of the girl’s body in the bell is a malicious mockery of the sanctified place just as the crucifix and the prayer that Muller delivers to the castle are anathema to Dracula’s house of horrors. This is only the first of a number ways in which the script of ‘Dracula Has Risen From the Grave’ explores the idea that good and evil are not bi-polar absolutes but in fact share many common traits and that morality is ultimately subjective. The character of the perverted priest is another example of these themes in practise; he’s not evil but he is weak and his weakness allows him to be easily manipulated by evil forces. Themes of moral hypocrisy and the indistinct parameters of good and evil would be explored further in the next film in the series Taste The Blood of Dracula in which the central characters, believing that their social status places them beyond morality, appear as loathsome and as cruel as Dracula himself. 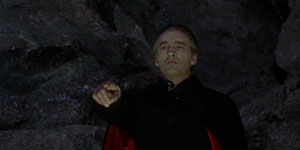 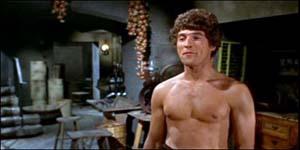 Visually ‘Dracula Has Risen From the Grave’ is striking throughout. Francis uses coloured filters over the camera lens in certain key sequences to emphasize the supernatural atmosphere as if the very air around the Count is thick with the smog of evil and decay. It’s a strange effect, obviously artificial, but none the less effective and helps recapture some of the gothic fairy-tale quality that was so arresting in Brides of Dracula.

The cast all give strong performances and Veronica Carlson is particularly delightful as the headstrong but prim Maria. Particularly charming is her performance in the scene where busty barmaid Zena is helping to undress and put to bed Maria’s boyfriend Paul who has had one too many Schnapps. Maria ushers the other girl away but then cannot bring herself to unfasten Paul’s clothing. Her prudish behaviour and girlish fluster contrasts with the earthy bar-maids ‘been there, done that’ attitude to the man’s body and also sets the scene for Maria’s seduction at the hands of the lascivious Count whose fetid presence is enough to curdle any pure thing that falls under his breath.

The film was the first co-production between Hammer studios and Warner Bros. and should have re-united star Lee with the director of all 3 previous instalments in the series: Terence Fisher however Freddie Francis found himself a sudden substitute in the director’s chair when Fisher was injured in a car accident. The film was a massive box office hit in the UK and the US and a further sequel was announced almost immediately. 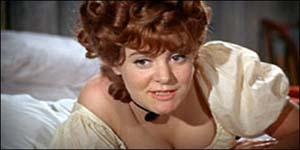 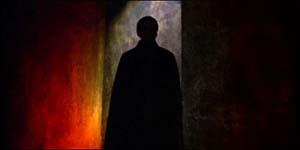 ‘Dracula Has Risen From the Grave’ improves on its immediate predecessor in every respect; it’s better paced, there’s more action, it’s visually lush, and perhaps most significantly it builds to a truly exciting, and gory, climax something that Dracula: Prince of Darkness conspicuously lacks. Allowed more screen time Christopher Lee is able to give a more full-blooded performance in the lead role although the actor was persistently vocal regarding his frustrations about the way the character was being maligned and marginalised. Lee was particularly upset about the staking scene but in all honesty the sight of Dracula clawing furiously at and finally yanking free the shaft of wood that Paul has plunged into his chest is one of the film’s most exciting and visually memorable moments equivalent to Peter Cushing cauterising the bite on his neck in Brides of Dracula. Despite his bravery it’s Paul’s atheism which apparently damns the staking to failure and in the context of the film’s challenging notions of good and evil the scene makes perfect sense.